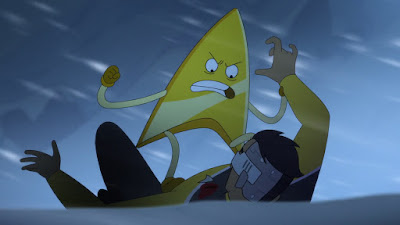 Some of Lower Decks' best moments are when it pokes fun at Star Trek's cliches, and it really goes for it here. Again we have three story threads, and it's impressive just how busy these short episodes can get. Firstly, Boimler and Mariner find themselves stuck helping Tim Robinson's guest character Fletcher, a passable send-up of the sort of story when a new character turned up for one episode to either cause trouble or be amazing for a week before disappearing. In a second thread, Rutherford and Tendi find themselves in trouble on the holodeck when the safety protocols fail, sending up seemingly dozens of episodes of TNG, DS9 and VOY, to the point where Rutherford gives a rundown of pretty much every holodeck character who's ever caused trouble in the franchise (and then some). Finally, the bridge crew find themselves in a face-off with some aliens over the fate of some Starfleet wreckage, bringing to mind any number of alien-of-the-week antagonists who turned up to cause a little trouble and then vanished off back into the galaxy.

Of the three storylines, which interplay rather nicely, the strongest is the holodeck sequence. It's joyfully silly – and surprisingly violent – revolving around Badgey, a computer icon designed by Rutherford to help with simulations. He's basically Microsoft's Clippy reimagined as a Starfleet Delta. The ease with which Rutherford accidentally creates a sentient programme (or something close), the fact that the safety protocols fail as soon as there's even a slight drop in available power, and the speed at which things turn violent are all ridiculous, but that serves merely to poke fun at how often these things happen on 24th century Trek. Honestly, you can't help but wonder how holodecks are even legal.

In Boim-Boim and Mariner's story, the by-now inseparable pair find themselves having to bail out their fellow Lower Decker when they leave him on shift alone to go to a dance, resulting in utter chaos when he fouls up the computer core. Fletcher is the sort of guy you might enjoy hanging out with for a while but you wouldn't want to work with him. He gets irritating quickly, but that's the idea, and it's clear he's being dishonest when he claims he was attacked and the core sabotaged. The truth – that he tried to tie his own brain into the core – is suitably outlandish. Both these storylines show a very human concern – trying to impress ones workmates and friends – can lead to serious errors in judgment. In turn, in the Trek galaxy, these errors can lead to deadly sci-fi absurdities. Both the violence and the science-gone-wrong nature of Badgey and the Fletcherised computer core bring to mind Rick and Morty, making this episode the most like the series on which the showrunner worked. This episode is more like how I expected the whole series to turn out.

The bridge crew's story is the least interesting, but it holds the episode together. Fletcher's messing with the core causes problems with the shields, suddenly making the rather primitive aliens the Drookmani a threat. In turn, their attack leads to the holodeck going awry. Everything ties up rather nicely at the end, too. The Drookmani are a very standard threat – a bunch of agressive aliens who want to get their hands on some Starfleet tech – but that's rather the point. This is week-in, week-out Starfleet work. The use of Antares-class ships in the wreckage – first named in TOS, seen in TAS and then later in TOS-Remastered – is a nice touch. I like the idea that Starfleet kicks off about aliens salvaging their tech even when it's a century out-of-date; I can't help but feel the Drookmani have a point.

The episode pushes the relationships of the four central characters forward. They're very much two pairs now. Rutherford and Tendi make a great team, and now Rutherford finally starts to admit his feelings for Tendi, so maybe we'll get some romance in the future. There's hints of that with Mariner and Boimler, but I think they probably work better as best buds. We shall see.

The starship to which Fletcher is promoted, the USS Titan, is the ship Riker took command of at the end of Star Trek Nemesis. It's amusing to think of Riker having to deal with that liability of a crewman. Apparently the Titan is Boimler's dream assignment. Are we building up to a cameo by Jonathan Frakes?

Best line: "Do you know how hard it is to get cheese out of fur in a sonic shower?"