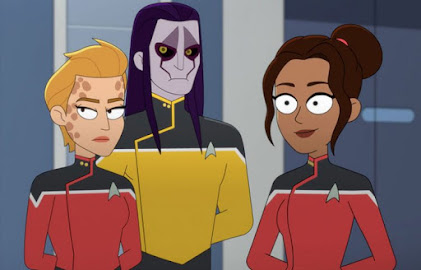 A very strong episode that balances silliness and character work, "Much Ado About Boimler" tells us more about Mariner than the eponymous ensign. We know what makes Boimler tick: he's all ambition and loyalty to Starfleet's rulebook. Mariner's more complicated, and we keep seeing there's a lot more to her than the disruptive rulebreaker she appears to be. When her best friend from the Academy shows up, it throws her into sharp relief and tells us a lot about her character.

Captain Amina Ramsey (a classy performance by Toks Olagundoye) has climbed the ranks and assembled an elite bridge crew, bringing them with her when she takes temporary command of the Cerritos. (Captain Freeman and the regular bridge crew are on a special mission to plant some seeds on a politically sensitive frontier planet.) Ramsey's success shows just how much Mariner's been treading water since she joined Starfleet. Ramsey appoints her first officer for the duration of her time on the Cerritos, but Mariner's behaviour rapidly tries the captain's patience. Although Mariner's a goof, she's generally a competent officer, just one who doesn't always do things the way Starfleet would like. It becomes clear what she's doing quite quickly: she's frightened that her friend is going to promote her out of her comfort zone. A lot of Mariner's questionable behaviour over the series makes sense when you know how hard she's trying to stay at ensign level. Maybe there's some fear of change there, but on the other hand, why shouldn't Mariner carry on being a really great ensign? Not everyone wants to move up the ranks.

Once everyone comes clean, Mariner and Ramsey work brilliantly together, and you can see how they were so alike back in the Academy days. It's good to see the Cerritos back on its primary mission – a follow-up second contact with the boggy planet Khwopa, where they'll help fix their water filtration system. The follow-up mission, to rendezvous with the USS Rubidoux, is where we see Mariner and Ramsey kick ass, as they save the crew (but not the ship) from a maturing spaceborne organism, which looks like it might be the larval stage of the Farpoint alien.

The title thread of the episode is a lot of fun, with Boimler pushed out-of-phase by Rutherford's experimental transporter upgrade. Alongside this, Tendi has genetically engineered a dog – called The Dog – who is clearly genetically unstable and capable of all manner of strange things. The Dog starts off as a clear reference to the classic sci-fi horror The Thing, mutating into terrifying shapes, but also brings to mind the polymorph from Red Dwarf (and maybe the shapeshifting alien from TNG: "Aquiel" was an influence). Tendi and Boimler are picked up Division 14, a branch of Starfleet that deals with unsolvable medical problems. The Division sends its own starship, the Osler, commanded by an Edosian, who's introduced in a very sinister moment and has a very unsettling laugh for any medical practitioner. It's amazing to see an Edosian again, the first (indeed only) we've seen since Arex on TAS. I'm loving these shout-outs to Lower Decks' forebear, but I'd also love to see an Edosian in live action Trek. Voyager pulled off Species 8472 in the nineties, they can definitely whip up an Edosian for Discovery or Picard.

The journey to "the Farm," Starfleet's experimental treatment facility, is harrowing, with the ship full of so-called freaks. It's gruesome but hilarious, leading to a mutiny as the freaks have come to realise that there is no Farm, and they've been abandoned by Starfleet. I'm glad this turned out to be nothing but paranoia, and that Division 14 just send unnecessarily sinister ships and doctors.

While the Boimler-Tendi-Dog storyline is the funniest part of the episode, it's Mariner's story that gives it the heart. A very successful episode.

Boimler's beaming accident is similar to the accident that put Geordi and Ro out of phase in TNG: "The Next Phase," although they were left both invisible and intangible. Among the "freaks" on their way to the farm, one is in an all-encompassing wheelchair-life-support-unit like Pike was in TOS: "The Menagerie." Another has turned into a giant newt-like creature, which suggests he's been playing with transwarp, since this is what happened to Paris and Janeway in the classic Voyager episode "Threshold." The ringleader though has a body ageing at different rates, which is what happened to both Chakotay in VOY: "Shattered" and Daniels in ENT: "Storm Front." He also describes himself as "half a rascal," a reference to the TNG episode "Rascals" which saw Picard, Ro, Guinan and Keiko reverted to childhood.

Division 14 is reminiscent of Section 31, of course, but they turn out to be much nicer. The Osler is a unique starship design, which does look particularly menacing. Its registration is NX-75300, which might indicate that it's experimental. 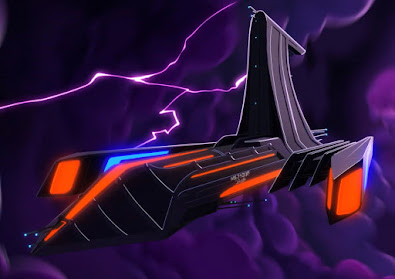