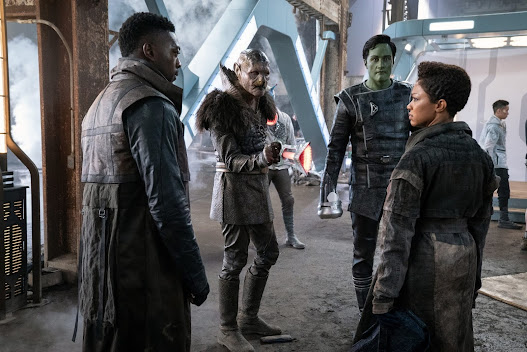 Star Trek: Discovery returns with a complete relaunch, acting as a second pilot in much the way Voyager tried with "Scorpion" and Enterprise did with "The Xindi." Those were qualified successes - great episodes that promised something really new, but didn't really make much of a difference to the style and direction of the series in the long run. "That Hope is You, Part 1," however, seems determined to push Discovery in a completely new direction, and juding from this episode, it should be a lot of fun.

The benefit Discovery has is that it doesn't have to follow the set-up from the first two seasons anymore. Strange New Worlds and, presumably, the Section 31 show, will continue showing adventures in the revamped version of the 23rd century, freeing up Discovery to map out a new future in the 32nd. It's Sonequa Martin-Green's series, and more so than ever, the focus is on her. The rest of the regular cast don't even appear in this episode, leaving the runtime free to explore Burnham's experience in this new century and her new friendship with Book. Thankfully, they're both brought to life by very talented actors who can do a lot with strong material when they get it. Martin-Green often seemed constrained by the role in the first two series, either having to display Vulcan reserve or over-the-top commitment, and while she still gets those moments, there's a much more human side to her character here. It's fun to see her get a chance to be manic, with the truth-drug scene genuinely funny, but the most affecting moment is her triumphant cry when she discovers her mission has been successful and the galaxy is still full of life.

David Ajala is very impressive as Book, edgy and likeable, just the sort of swashbuckling character the series could do with. I enjoyed him as Manchester Black on Supergirl, but like Martin-Green, he's working with stronger writing and characterisation here and impresses more. There's a strong chemistry between the two that makes their development from antagonism to friendship (and clear attraction) believable. Plus, Ajala gets to strut around with his chest out, which certainly doesn't hurt.

It's also notable that there are only three speaking human characters in this episode (assuming Book is human, more of which later), and they are all people of colour. That shouldn't be a big deal, but it is, particularly in the current political climate. The two leads are a Black American and a Black Briton, and they're joined by an Indian actor. After so many years of a very white future on screen (less so in Trek than other things, but still) it's a strong motion.

It's exciting to be in (almost) entirely unknown ground with the series. We've got recognisable alien races, but their roles are unlike what we're used to - Orions allied with Andorians, with a weird mix of aliens on staff. The Federation is drastically diminished, the extent of which is unknown. Starfleet is basically gone, from the looks of it. As much as I love all the mythos of the Star Trek universe, and revel in the references of things like Lower Decks, it's time we headed into the unknown again. Still, that's not to say there aren't plenty of little nods and winks peppered over the episode for the fans (yeah, they'll be at the end there.)

The 32nd century is a mix of the remarkable and the mundane. There's exceptionally advanced technology: programmable matter used for furniture, holograms used as mirrors and alarm clocks, portable personal transporters. But some things are far more limited: there's no tritanium, dilithium is in short supply so warp drive is at a premium, sensors are limited and Mr Sahil at the Starfleet outpost has barely any idea whose out there beyond his little bubble. It's also very, very Star Wars: a roguish trader with a heart of gold; two characters who start at odds but are blatantly going to end up together; wrecked spacecraft; man-eating monsters; conversations in English on one side and guttural alienese on the other; a wretched hive of scum and villainy... of course, Trek has played with these tropes before, but it's rarely gone as full on Star Wars as here. In Trek terms, the most similar outing to this was the 2009 movie, which played with a lot of the same tropes. Visually it's bloody amazing, and the location shooting in Iceland is astonishing. The incredible geology of Iceland has been used for alien planets a few times lately (including Altamid in Star Trek Beyond), and it's easy to see why it was chosen to represent Hima. The only visual sequence that didn't work so well was Burnham's arrival, crashing into Book's ship amid a load of space debris, which is overly busy as the battle sequences were last season. On the other hand, it's presumably meant to be overwhelming and confusing, and it's not as if it lasts too long.

The episode takes a moment to go out of its way and tie up the last season's events, with Burnham sending the Red Angel suit back to send a last message to Spock and then self destruct, which seems bizarrely short-sighted. That might have come in handy, you know. But then it wouldn't be hard enough for Burnham, whose story is inarguably a superhero narrative. She's immediately out of one galaxy-threatening crisis and into another, once again pitting herself as the last, best hope for humanity. The woman really needs a quest, doesn't she? Book also steps into that role, having some kind of superpower that allows him to summon life forms and communicate with all manner of creatures. It's an assumption that he's actually human, although with a name like Cleveland he's got to be at least part-human (although there's also an Orion going by Hadley, so maybe names aren't much of a clue to origins in this century).

There's a troubling lack of morality on display here. Sure, Book's a bit of a baddie, but he's a lovely old soul who looks after endangered animals... but has no qualms killing a lot of people, and Burnham joins in. They murder a lot of people in this episode, and yes, they were under fire, but do they not have a stun setting on their weapons anymore? And then Book feeds the rest of them to his per hypnotic worm monster. It's hardly upholding the noble ideals of the UFP, is it?

Still, this is a quibble. This was a very fun, exciting episode which provided an emotional punch while promising a bold new direction for the series. I'm looking forward to exploring the 32nd century.

It's 3188, 931 years since the end of the previous season, and 789 years after the previously latest set series, Star Trek: Picard. We've seen bit of futures beyond this, of course, but this is the latest point we've seen in the franchise, with the exception of the Short Treks episode "Calypso." (That was set a thousand years plus from when Discovery was abandoned, which now puts it at least as far as the 42nd century.)

Something called the Burn made all the dilithium explode about 120 years earlier, destroying most of the ships and devastating the Federation. The Gorn have also destroyed two light years worth of subspace. This might have something to do with the devastating Omega molecule seen in Star Trek: Voyager, but maybe not (it's a popular fan theory, but there's no real evidence for it just yet).

Time travel was banned after the Temporal War and all time machines destroyed. This is a handy way of putting it ahead of the other far future stories, which tend to revolve around time travel, and leaves Burnham stranded. The Temporal War was glimpsed in Enterprise and involved the factions as far ahead as the 31st century. Still, once time travel has been invented it can't really just disappear - people could pop out in any time period from any other once time machines exist.

The marvellously named Cosmo Traitt is a Betelgeusean. Like the Saurian last season, the Discovery team have resurrected another obscure Motion Picture alien with a modern redesign. I really like the updated design, although it loses the two mouths element from the original.

The Orion-Andorian alliance makes for a colourful setting at the Mercantile. Their security staff includes Lurians (like Morn), a Tellarite, a Cardassian (briefly seen, easier to spot in the trailers) and an Osnullus (the big-headed aliens seen in the background on previous episodes of Discovery), plus some new faces.

This episode is Part 1, but there doesn't appear to be a Part 2 in the list for the season. I'm wondering if that ends up being the series finale. Other episode titles include the intriguingly named "Unification III" - seemingly following on from a two-part TNG episode.

David Ajala appeared on the 2010 Doctor Who episode "The Beast Below," making him one only a few actors to appear in both franchises. The only other Trek regular to appear on Doctor Who is Simon Pegg.