After a bold opening, Discovery settles into a groove with an episode that's fun but predictable. There's a clear western feel to the adventure, with the Disco crew riding into town and getting mixed up with the local bandits. It was a clever move, separating Burnham from the ship for the opening episodes, allowing her to do the expositional heavy lifting and find out about the 32nd century, while this episode has to deal with a lot more characters and so doesn't have nearly as much scope for worldbuilding. In that light, a really straightforward adventure isn't a bad idea, but it's still a bit underwhelming after last week's season opener.

This episode put me in mind of "Caretaker," the Voyager opener, what with the eponymous starship crashing into parts unknown, leaving the ship in tatters and the crew injured. Discovery only loses one crewman, which is a lot better than Voyager managed, but the ship is in much worse shape. Stuck without communications until they can get hold of some rubindium (that handy made-up element from TOS), they need to dispatch someone to the unfamiliar planet they've virtually crashed into. It's a bit hard to swallow that, with both space and time seemingly variable and a whole region of the galaxy open to them, both Burnham and the ship manage to smack right into habitable planets. Maybe the angel suit has some failsafe for this? Who knows, but some kind of mention would have been nice. I do love that wormhole travel is depicted as being incredibly dangerous, with the tidal effects of the space/time distortion putting the crew through the ringer. Wormhole travel is usually far too safe and uneventful on Trek.

Although everyone gets their moment here - including some unfairly overlooked characters who've been with us since season one - it's Doug Jones's time to shine. He's absolutely excellent as the new, more confident Saru, currently acting captain of the Discovery, and although he shouldn't really be heading down to the mysterious planet himself, captains are always doing this. I liked how quickly he went from non-interference to not-standing-for-this-tyranny, although I wish he'd have whipped out his superpowers (Saruperpowers?) a bit sooner. It's almost like he forgot he could should venomous barbs when riled. 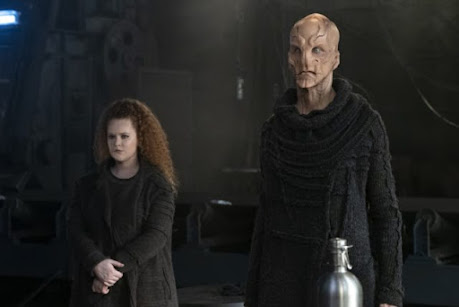 His relationship with Tilly grows, with her remaining the most delightful character. Tilly got some good material here. She's clearly overwhelmed by the situation, perfectly understandably, but still holds it together when she needs to. She had a nice moment with the sweet Coridan guy, and it looked like she'd found her own future friend, but then he died in a very nasty way. It was a pretty horrible episode for a lot of our regulars, to be honest. Much needed time spent with Detmer and (too a lesser extent) Owosekun, and there's potentially more to them than being friends and colleagues, but Detmer really took a beating. She's suffered a lot over the course of the series, and it finally looks like it's taken its toll. Emily Coutts is really impressive in this episode, believably showing the PTSD that Detmer is clearly suffering. I do hope they explore that maturely, and don't make her another possessed cyber-person like Airiam. Let her have some human drama. Everyone's favourite space couple are back on strong terms, with Dr. Hugh on top form as he bosses his boyfriend around, taking full advantage of his bashed-about brain. Stamets is always watchable, even when he's recovering from serious trauma, and these two light up the screen when they're together. I'm glad the couple is back together properly.

Georgiou is already starting to get on my nerves. Aside from being shitty to Tilly, her character really is a one-note scoundrel, and while Michelle Yeoh is clearly having a great time as a hammy villain, there's just not enough to her character to warrant giving her that much focus. I realise they're setting up her Section 31 spin-off (still not sure how that's going to fit in, but we'll see), but that's going to require a lot more depth for the character to hold her own show. I did like her relationship with Nhan, who looks like she'll be something of a new recruit for Georgiou's personal mission, and I like how she's resigned herself to forever jumping "between universes" now that she's cut off from her own. And to be fair, she worked well in this episode, striding into a stand-off being a hardass and shaking off a nasty pain-inducing blaster. She probably uses an agonizer for fun, there's no way that's going to stop her. But I really can't see how this shallow of a character is going to remain entertaining all season, especially if they're going to keep this battle-for-command subplot between her and Saru simmering for long. I hope the cold war goes hot sooner rather than later.

The alien planet, utilising more amazing Icelandic vistas, is just stunning. The idea of a fractured planet, parts of it floating tenuously over the horizon, is just a beautiful visual, and truly different to any location we've seen on Trek before. The Colony (could they really not think of a name?) is an interesting mix of the timelessly ramshackle and the highly futuristic, and that makes sense. Step into a rural town in S. E. Asia or developing Africa and you'll see people with iPhones and plasma screen TVs in their huts. Once technology turns up, it hangs around, and gets into the hands of everyone. Hence, programmable matter for people living in a seedy dive bar with barrels for chairs. The Coridans were a nice bunch - I really like that we're seeing lots of aliens in the post-Federation future - but the villains were pretty weak. While I like that it's humans being the villainous species this week (assuming they're human - there's plenty of human-looking aliens in Trek), they were just dull and uninteresting. Jake Weber was singularly unimpressive as Zareh, but then, I guess he didn't have much to work with. Last week we had some fun one-off characters as antagonists, so this was a disappointing drop in villain quality.

I liked the pidgin English used by the villains, though. This was a simple, effective way of showing that things have moved on. Notably, Zareh uses the term V'draysh, the corruption of Federation that cropped up in the Short Trek "Calypso." We assumed then that the short was set around the 33rd century, with Discovery having drifted for around a thousand years, but now we've jump forward "Calypso" could be set as far ahead as the 42nd century. Then again, with all the time travel going on, it's impossible to be sure. In any case, the V'draysh is clearly a thing in this time period, so there's a lot of changes in people's attitude to the Federation.

The story moves inexorably to the reunion with Burnham - tremendously predictable but really effective. It's been a year and she's grown her hair out. It'll be interesting to see just what's been happening while she's been away from the ship. I predict flashbacks next week.

Alien life forms: Coridans first appeared in season one of Enterprise, looking roughly like they do here, although they made an appearance in season four looking completely different and insectoid. Possibly more than one species lives in the same system. Coridan was mentioned as an important planet in TOS, due to its dilithium reserves, which suggests it wouldn't have survived the Burn. 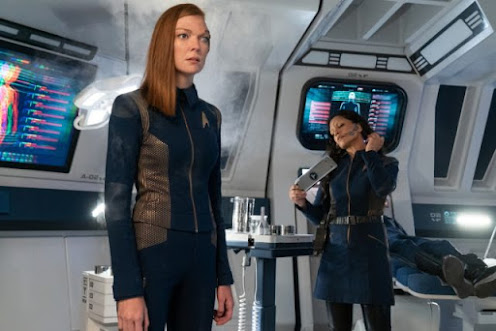 Sexy Trek: Such a crush on both Emily Coutts as Detmer and Rachael Ancheril as Nhan. Am I developing a thing for women with metallic implants on their faces?

Crew Roster: 88 crew stayed on Discovery for its journey to the future, which is a pretty astonishing number of people willing to give everything up and journey into the unknown. Especially Jet Reno, who doesn't seem to like working with anyone on the ship. It was also gratifying to see people doing the mopping up after the climactic horror of last season. Things are usually so inexplicably clean on these ships.