Discovery continues to explore the far future of the Trek universe, seeing familiar worlds and races portrayed in new ways. At the same time, the core characters are not only expanding but becoming deeper, with some real and believable focus paid to their development and their relationships with each other. Although nothing as monumental as reaching Earth happens in this episode, it's easily as important as the previous three instalments to the ongoing story of the Starship Discovery and its mismatched crew.

First; the interplanetary stuf.. It's our first visit to the planet Trill since the third season DS9 episode "Equilibrium," and it's beautiful. We didn't see much more of it than the Caves of Mak'ala on DS9 - which look essentially the same, albeit bigger, more expensive and with some fairy lights up - but this time we get to see a truly stunning rendition of a green and pleasant alien world. This series is particularly stunning in its third season, and notably it looks like the Federation's main member planets have weathered leaving the union pretty well, whereas the far flung colonies have collapsed after having been abandoned. Which is pretty much what you'd expect, given that the colonies would be dependent on support from the homeworlds to function. Trill, like Earth, has become insular, although to begin with the Trill are far more welcoming than the Terran authorities.

This doesn't last long, however, when the Trill elders discover that Adira, the new host to the Tal symbiont, is human. When the word "abomination" gets thrown around, trouble isn't far behind. Again, we've been having some debate in the household about how much of the trans allegory with the Trill was deliberate on DS9, but it's very clearly deliberate here, and while there's no clear parallel (the Trill are more species-ist than anything, so it's more a racism parallel) the choice of language is important. After all, the showrunners have made the conscious decision to feature two trans actors in the Trill storyline, and they'll both have heard this word applied to them, either directly or towards their community as a whole.

Pretty big SPOILERS from hereon out, so proceed with caution if you haven't caught the episode yet. 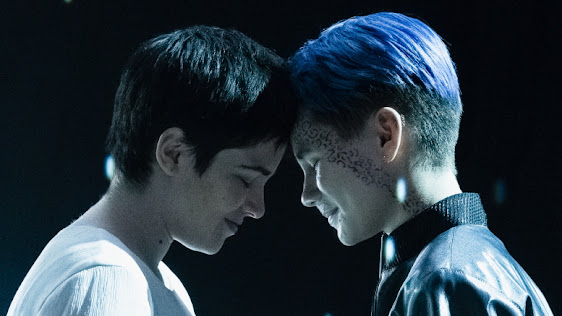 A Trill's access to the symbiont's memories isn't an exact science as it is, and a human body isn't designed for this sort of thing. The Trill elders insist it has never been successfully tried, and their half right - Riker was the short-term host to Odan back in the Trill's first appearance, TNG's "The Host," but while it worked well for a while, it almost killed him. This time it's been more successful - whether due to eight centuries medical advancement or Adira's being more compatible isn't clear - but the new host still can't reach their former memories without the Trill's help. Thankfully, there's one Trill, Xi, who's more broad-minded and sympathetic to Adira's cause. He leads Adira and Michael to the Caves of Mak'ala to spend some time swimming with squid.

It's a bit of a shock that Ian Alexander's character, Gray, after so much fanfare, is dead before the series begins. Notably, though, this doesn't look like it'll stop him from appearing in future episodes. Gray Tal followed Admiral Senna Tal as the legitimate next life of the Tal line, and was in a extremely touching relationship with Adira. The scenes between them, in a sort of psychic flashback within the pools of the Trill symbionts, are achingly sweet. Knowing that Gray is Tal's host we're waiting for the inevitable tragedy, and it comes quickly, leaving a bunch of Star Wars-esque medical bots to follow Adira's instruction to implant Tal within their body. It's a beautiful but heartbreaking sequence; I'd argue, by far the most affecting  in the series so far. The eventual crescendo, with Tal's former hosts all appearing to Adira is tremendously effective - it's surprising they never did anything like this with Dax on DS9 (or, for that matter, Doctor Who - the recent series twelve finale being the closest, and even that's not really the same).

Adira leaves Trill with a new sense of confidence and poise, plus musical ability, which is nice. The Trill elders, for their part, turn on their heels and accept the new member of their race. It's a bit abrupt, but at least it's sensible. Their fear of "polluting" the Trill race seems to stem from the fact that most of the symbionts were killed in the Burn, which must mean a lot more of them were offworld than in the old days, but it's pretty insane that they'd risk one of the surviving symbionts by attacking the host. Then again, the Trill used to exile hosts who "reassociated," condemning the symbionts to die with them, so they've never been completely logical or enlightened in these matters. God knows what they'd make of the fact that Gray is now hanging out with Adira as a sort of psychic ghost, but good thing they are. These two are far too adorable to split up, even if one of them has died.

It's a bit of an oddity that it's Michael who accompanies Adira, but I guess it makes sense in its way. As Culber points out, she's a very different person to the one who joined Discovery at the beginning of the series - she smiles and everything now. She's also the only one with any experience of the 32nd century, so she would be the choice for away missions. It's Culber who's become the glue holding the crew together, though. In fact, he's very much the voice of the crew from the very beginning this episode. Wilson Cruz is wonderful in this episode, portraying Culber as someone who has fully come to terms with his experiences (he died and went to mushroom hell, which is a pretty big one) and now wants to help his friends and colleagues do the same. It's a poor state of affairs when Burnham is one of the better-adjusted members of the crew, and suddenly we realise that having a counsellor on the bridge was probably a pretty good idea after all.

For all his efforts as captain, Saru seems totally adrift when it comes to the personal wellbeing of his crew. There's a lovely moment when he admits his envy of Captain Pike's easy camaraderie with the other officers, and in fairness, Saru is the only member of his species in an almost entirely human crew, so he's always going to be something of an outsider. It takes the ship's computer to suggest ways for him to connect to them and help them start their recovery. This scene is both hilarious - the computer suggesting relaxing colouring books - before its switches voices and a more human attitude comes out. Finally, we're seeing the beginnings of Zora from the Short Trek "Calypso," with Annabelle Wallis voicing the computer for these moments as she did on that episode. Saru believes the sphere data is protecting its crew as they protected it, and he's surely right. More than that, of course, the data is helping the ship's computer develop sentience - exactly what Control was after.

This culminates in a dinner party for the senior crew (sans Burnham), one of the best and most believable scenes in the series. At first painfully awkward, it becomes more relaxing due to wine, good food and, surprisingly, Georgiou's ice-breaking skills. Very quickly, though, it goes south, like many a family dinner, and it's Detmer who shatters the peace, coming out with some very strange comments before snapping fully at the rest of the crew, particularly Stamets. Who, in all honesty, was a massive dick for most of the episode - the nicest thing he said was "Thank you for trying." It's interesting that Detmer's PTSD stems not only from her several near-death experiences, but also the day-to-day stress of piloting a starship. This has always been presented as something of a lark, but the responsibility for the entire crew's lives, just as much as the captain, would be unbearably draining. Culber is also the only one who seems to notice that Detmer is struggling (except Owosekun, who's quietly keeping an eye on her), but in fairness, she's not letting anyone get close to her. As uncomfortable as the whole situation at dinner is, it lets Detmer, and the rest of the bridge crew, finally address some of their issues and begin to help each other to heal. It's powerfully effective and very real, even though there is a lizard-man at the table.

Two separate strands that deal with finding and being true to oneself bring this episode together, while at the same time pushing forward into the future history of the series. A very strong episode.

Saru takes the computer's advice and plays the crew Sherlock Jr. starring Buster Keaton. It's a good choice - he's much better than Chaplin.

The main voice of Discovery's computer is still Julianne Grossman, here flitting between her and Wallis as the "Zora" personality comes out. Apparently Grossman's birthday is February 23rd, but no one seems to know what year she was born. Does anyone know? I want to see if she's my birthday twin.

Mary Wiseman doesn't have as much to do this episode, but she's absolutely brilliant in her scenes, especially when Tilly tells everyone to cut their shit at the dinner table.

Does everyone know that Georgiou is the Mirror Universe version now? I guess there's no reason to keep it classified in the future.

Are Detmer and Owesekune a couple? They seem particularly close the last couple of episodes.

Before Adira, Tal had six hosts. Three of them, including Admiral Senna, were Starfleet officers, and one of them is seen in a Picard-era uniform. Unless some of the hosts are very long-lived, Tal must have spent some time in the pools between hosts. While I'm still disappointed Dax didn't turn up, this suggests the symbiont could still be alive.

Tal knows how to make hasperat. Can we get the recipe please? It's not in the Star Trek Cookbook (a significant oversight).