The massive, multimedia crossover event Time Lord Victorious is already a bit of an overstretch for most of us fans. I'm torn between the excitement and intrigue of such an expansive storyline, and the money-grabbing enormity of it all. I never like the huge crossover events that Marvel an DC periodically do, where you have to buy three dozen comics to understand what's going on and it costs you a fortune. On the other hand, this is new ground for Doctor Who and it is my number one fandom, so the excitement is there. So I'm going to pick and choose and and where I can.
Some people are questioning why they're focusing on the Tenth Doctor and an event from his era of the series, and apart from the obvious popularity of the incarnation, there's the fact that the BBC can't make it appear, intentionally or otherwise, that any purchase is necessary to follow one of their broadcasts. So tying into the current series with the Thirteenth Doctor is a no-go. Even then, she's not entirely absent from the proceedings. 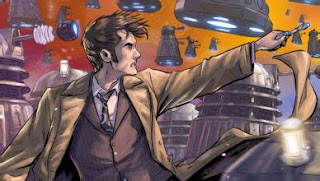 The first of two comic strips opening the event is this, Titan's latest miniseries, released as two monthly issues. In it, the Tenth Doctor is pulled into a divergent timestream whereupon he is forced to aid the Daleks in their fight against a terrible power from the dawn of time.
This is Jody Houser's story, following on from her work on the Thirteenth Doctor comics, where last we saw the Tenth Doctor involved in his own future (but I've not read that one yet). It's well-written enough, but for all the shouting about it, it's not all that much of an event. The Doctor reluctantly teaming up with the Daleks has been done before, and better, although at least the Dalek Prime Strategist, a new character, adds an air of sophistication. The Golden Emperor appears as well, harking back to the early "Dalek Chronicles" days of the tie-in comics. He's had a bit of an updated design but he's still iconic, and this sets up the Daleks! animated series nicely.
My main problem is the villains, the Hond. Although there's an interesting concept behind them - the sort of metaphysical idea that used to show up in the New Adventures days - design-wise they're just mud monsters, and that's really not all that interesting. Also, while I understand this crossover is designed to be expansive, we're already expecting another terrible threat from the Dark Times, the Kotturuh to threaten the universe. Do we need to introduce another? Still, there is a similarity with the Ancestor Cell, from the Eighth Doctor Adventures novel lie, which suggests the Hond as another potential identity of the Enemy. With Faction Paradox suddenly being mentioned in other prose stories lately, this might not be entirely trivial.
Altogether, the adventure is fine, but underwhelming. Nice artwork by Roberta Ingranata. 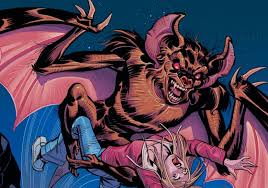 Doctor Who Magazine jumps in on Time Lord Victorious with a three-part comic story featuring the Ninth Doctor. DWM has skipped the comic strip for a few months to save money - the impact of COVID on sales - and makes an event out of bringing it back. We haven't had a past Doctor comic in DWM since the nineties, I believe, and while it's back to business with the Thirteenth Doctor next month, this does make it rather stand out. Like Defender of the Daleks, this features a threat from the Dark Times, but this is something we know and expect. Nine and Rose find themselves back at the dawn of time in the middle of the Eternal Wars, when the Time Lords fought the Vampires.
It's a clever way of having the Ninth Doctor meet the Time Lords - although according to this, it's so early in their history that it's before they were time travellers. They're the Space Lords of Gallifrey, led by an angry female general who we learn is an early incarnation of Rassilon. It seems that every Time Lord must have a new regeneration with a different ethnicity or gender these days - and I'm all for it. Better than all those endless old white blokes in big hats.
I'd had an idea to write about a Vampire ship years, ago, and never used it, but in my mind it was something organic and far more like a perverted form of TARDIS. I love what Scott Gray and John Ross have done though - flying castles and crypts! The vampires themselves are disappointingly traditional, with only a brief appearance of a Great Vampire storming through the black, but it works pretty well. I particularly like the use of Cucurbites - blood-drinking space weapons - that first appeared back in the Eighth Doctor comic "Tooth and Claw." (The story also reference the episode "Tooth and Claw," just to mix things up.)
It's a pretty solid adventure with some vampire tropes being exercised, but it's the glimpse of the ancient Gallifreyans that's the most interesting.
Posted by Daniel Tessier at 21:19