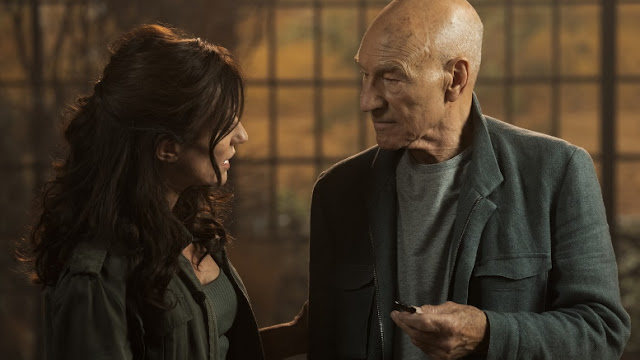 An over-the-top, occasionally silly but overall satisfying end to the second season of Star Trek: Picard, this final two-parter fair belts through plot beats like there's no tomorrow. Which, had our heroes not succeeded, I suppose there wouldn't be. As with the first season, and the recent run of Discovery, there have been some major pacing problems with this season, with an awful lot of side-steps and a leisurely pace through the middle of the run, leaving everything to be rushed for the finale. Perhaps this is a deliberate choice to make the end more climactic, but it does make it harder to fully appreciate the finale.

There are a lot of hard-to-swallow elements to this story, and you need to allow a lot of coincidences to make it work. Not everything quite adds up in the end, but for all that, it's so much fun, and the final episode in particular, so touching, that it's hard to be too unhappy about this. Alison Pill blows it away as the new Borg Queen, by now a convincing amalgam of Jurati's character and Wersching's Queen. We've had false dawns for a new kind of Borg before (whatever happened to those self-aware drones with commanding whole cubes from VOY: “Unimatrix Zero?”), but this time it looks like Jurati's new Borg really are a new era. (Although the news that Pill is not returning for season three suggests we won't be seeing them again, at least not anytime soon.)

Seven's rebirth as a semi-Borg (rather unbelievably, given the circumstances, with her implants in exactly the same places as before) was both predictable and disappointing. It would have been a nice culmination of Seven's development for her to finally be fully human. That said, her acceptance, with Raffi's help, of her part-cybernetic nature is satisfying, especially since she helped birth this new strain of Borg and prove that there's potentially another way of forming a collective. (Maybe they'll meet up with the voluntary hive mind from VOY: “Unity”... or maybe not.) Finally, Seven and Raffi get the smooches on, and everything is all lovely.

No surprises at all that Rios decides to stay in 2024, with the beautiful Dr. Teresa and her precocious sprog. Perhaps leaving him there isn't the best idea, given that this guy is a walking butterfly. I'm half-convinced that Chris is staying just for the cigars, but it's the only way this could play out – Teresa couldn't very well travel to the 25th century with her littl'un in tow.

As for Mr. Picard himself, there's rather more to unpack. As anticipated, we see more of little Jean-Luc's traumatic childhood, including his mother's inevitable suicide, for which he blames himself because he unlocked her door and let her out. He even leaves the very same key in the right spot for his younger self to discover centuries later. As powerful as this is, and as much as it shines a light into his character, it makes you concerned for the state of mental health care in the early 24th century. Even TOS, with its asylum planets, was better than this.

Yet this doesn't seem to impact Picard as much as the death of Tallin, who sacrifices herself so that her young ward Renee is able to make her epochal journey to Europa. Again, the logic behind this is a bit wonky: Queen Jurati gives the gang a cryptic message about there being two Renees, and Tallin decides the only possible option is to take her place and be killed in disguise. Surely they could, as a team, have come up with some kind of alternative plan? With all the incredible technology at both Tallin's and Picard's disposal? Still, at least Tallin gets to meet Renee at last, and her death seems to be the final, vital click to set Picard on a path to accepting closeness to others. Nonetheless, Talinn's resemblance to Laris remains unexplained (presumably they're part of the same lineage but this isn't elucidated, and that's OK – we don't need every mystery explained away).

The most gorgeous part of this is that, as somewhat expected, all of this has been a huge test for Picard, as Q just wants to set his old friend on a path to happiness in his twilight years. There are, again, some massive questions outstanding: why is Q suddenly dying, having been previously timeless? Why did he seem so nuts when he first came for Picard? Did the alternative timeline really exist, or was it all some fantasy world he created? (The Borg Queen certainly exists from that timeline, suggesting it was real all along.) All in all, this is rather like an extended version of TNG's “Tapestry,” except there Q explicitly said that Picard's decisions were only affecting his life, and that the destiny of the galaxy would not be derailed. Here, he puts the weight of the universe on Picard's shoulders as a means of getting him to engage in some introspection.

This is both perfectly in character for Q, who, in spite of being a godlike entity from a higher realm of consciousness, is also spectacularly male in his attitudes and could never just talk to Picard, but also for the good admiral. There's no way that Picard would ever open up to himself or others unless the fate of the galaxy depended on it. I do agree with Stewart, though – it's a pity that we won't get to see how this new understanding will have on how he captained the Enterprise.

The final episode, particularly, works best as a celebration of the characters and actors we've come to enjoy over so long. Elnor is essentially superfluous, even as his entertaining turn as the emergency distraction hologram, and neither Raffi nor Rios, in spite of their stories' closure, feel fundamental to the story. Agnes, as brilliant as she is, is more a plot point than a character by now. The only new character who feels truly part of Picard's story is Talinn. However, we have final, touching closure for the Q-Picard enmity-to-friendship, Seven getting a cheeky field commission to captain the Stargazer and a final, time-looping conversation with Guinan.

Brent Spiner's turn as the now-outright villainous Dr. Soong is great fun. The character is a bit of a two-dimensional caricature, with none of the depth of Arik Soong or Lore, who, let's be honest, were hardly that comples to begin with. Which is a pity, because he began as an interesting, conflicted scientist and father, but became reduced to a moustache-twirling monster by the end. Still, Spiner's involvement feels essential to this series, and he does make an entertaining villain.

Then there's that cameo, which unfortunately was spoilered for me by Wil Wheaton himself, who was all over the internet the day after broadcast, which for those of us in the UK, was the day we got to see it. He's not really playing Wesley as such, it's more Wheaton turning up as a fictionalised version of himself, but then, he has been travelling through time and space for subjective decades so he's probably changed a bit. It does seem a bit arbitrary that he recruits Kore, seeming a bit of an afterthought for a character the writers didn't know what to do with. It's worth it for Wheaton's cameo though, and the unexpected linking of the Supervisors to the Travellers. (That annihilates a lot of spin-off fiction theorising.) It's amusing to read that the various showrunners were fighting over who got to bring Wesley back, but there's no reason he couldn't turn up in each series, recruiting a character. Maybe we could finally get that Assignment: Earth spin-off...

The finale leaves us with the new Borg working with Starfleet to stop a galactic event that threatens everything, out of nowhere. Identified by Seven as a gigantic transwarp conduit, the question remains who opened it and lies on the other side. The most obvious answer is that it leads to the Confederacy timeline, but it could just as easily be to another galaxy (if it's the Kelvans I claim my prize). It really comes out of nowhere but is presumably a lead-in to the third season. We shall how Admiral Picard, Commander Musika and Captain of Nine deal with it, along with the bulk of the TNG core cast.

Soong has a paper document pertaining to the Khan Project, dated 1996. This links him directly to the Eugenics Wars and Khan's creation, which makes sense concerning his descendant Arik Soong's obsession with the Augments. The date has something of a nebulous meaning, seemingly linking to the date given for the end of the Eugenics Wars in TOS: “Space Seed” but suggesting that the wars don't actually start until after 2024, which is more in keeping with the vague but more realistic suggestions in later series. The opening episode of Strange New Worlds clarifies this, and presumably the broken records from the time led to the 1996 date being applied to the war itself.

On the subject of Soong, has he really not made any hard drive back-ups of his work?

It's not very clear whether this is the original timeline restored, or a new but similar one. Presumably it has to be the original, given that Queen Agnes was present before everyone went back in time (including her earlier self) and that even minor details such as the bullet holes in Chateau Picard being there when Picard was a child. Which suggests the entire sequences of events, including the change to history and back again, was a huge, predestined loop.

Picard mentions how he used to imagine his maman as an old woman drinking tea, explaining away the discrepancy of his image of her like so in TNG: “Where No One Has Gone Before.”

How has Queen Agnes stayed out of the original Borg's way for four hundred years? And does Picard really have the authority to invite the new Borg into the Federation, even provisionally?

Holo-Elnor has a 29th century mobile emitter, somehow from the alternative timeline, which is a bit of an oddity.

Q speaks of his loneliness in his final days... what has happened to Mrs Q and Q Junior?

Little Jean-Luc has a bunch of toy starships, including a Columbia-class – the proposed refit for the NX-class that has previously not made it to screen.