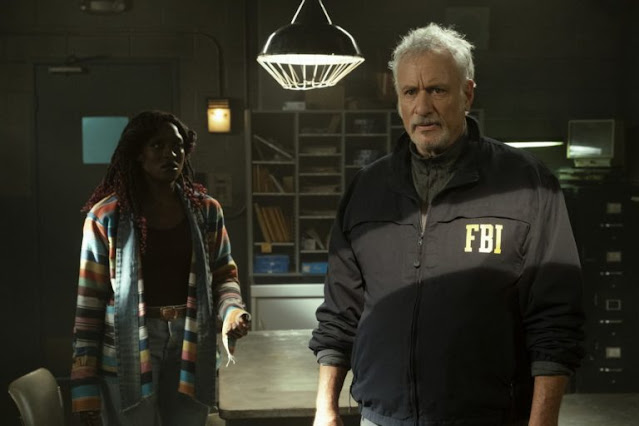 “Mercy” is the first episode of the season that doesn't really work. There's something to be said for a straightforward adventure, but this side-step into the FBI's least wanted is so unnecessary to the main plot, while also being not terribly interesting in itself.

It's a fun bit of trolling on the part of the showrunners to cast Jay Karnes in this episode. After having so many actors reappear either as their popular characters or someone related to them, casting Karnes in a time travel story immediately makes us think he's reprising his role as 29th century time traveller Ducane. They even name his character Agent Wells, not only suggesting H.G. Wells, father of time travel fiction, but the Wells-class USS Relativity on which he served. (Apparently this all actually a reference to his role in Matalas's Twelve Monkeys series.)

So it's funny when it turns out he's just a regular 21st century agent after all. Unfortunately, having him as nothing more than a Fox Mulder rip-off makes him a fairly uninteresting character, in spite of a decent performance by Karnes. It's a nice touch that he's spent decades looking for aliens after freaking out due to a brief contact with some Vulcans in his childhood, but it's still not enough to make this diversion worthwhile.

The best material this episode is between Guinan and Q, here meeting for the first time from Guinan's perspective (I love time travel). Aghayere is excellent here, occasionally sounding astonishingly like Goldberg but mostly creating a new version of Guinan. She's terribly creepy when projecting herself to Picard, another previously unseen El-Aurian power. De Lancie gives an amazing performance as Q, now facing the end of his life and waning powers. We've never seen Q so vulnerable before. (It's hilarious to think of Q, unable to teleport, having to make his way to Guinan on the bus.)

Meanwhile, Agnes is going around eating battery acid (I wonder if her stepmother is an alien?) while Seven and Raffi sort out their problems. There are some nice moments between Ryan and Hurd, and Alison Pill looks incredible stomping about LA in her ballgown, assimilating nasty blokes. Eventually, the new Queen joins forces with Soong, who's own life is falling apart thanks to Q deciding to help Kore. Quite how Soong thinks his destiny as saviour of the Earth is going to come about when the Queen wants to conquer humanity is anyone's guess, but baddies gotta be bad, right?

Judging by his age, Wells probably met the Vulcans in around the 1970s. We know from ENT: “Carbon Creek” that they were observing Earth as early as the fifties and there was another one due in about twenty years.