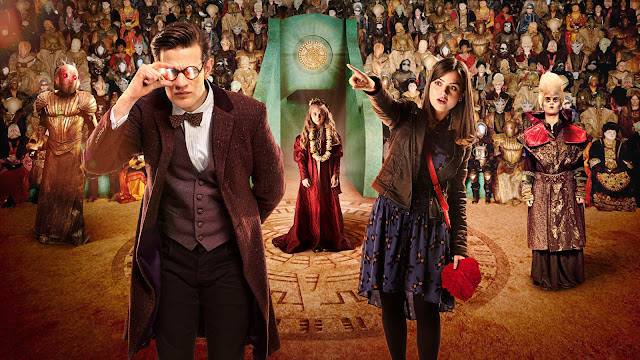 I’m not 100% sure where my opinion lies on this episode. There’s so much to praise here, and yet, it doesn’t quite hold together. The second script from Luther scribe Neil Cross (the first being for the upcoming episode Hide) comes across as very, very Moffat. Either the showrunner wrote a lot of this or Cross has got his vision of the series nailed. As with the eleventh Doctor era as a whole, it all comes down to the power of stories. The Doctor accepts the Akhaten religion, before it does something to actively offend him, because it’s “a nice story.” The Doctor takes astrophysics, and, like Carl Sagan before him, turns it into a story. The currency in the system, and the power that defeats the monster at the end, is the value of stories.

Doctor Who is a very visually impressive series, these days, and this episode is an absolute stunner. The eponymous Rings provide a beautiful setting with a genuinely cosmic sense of grandeur. Inside the habitat things are very clearly studiobound, but that’s not a problem when the inhabitants themselves are so varied and wonderful. Apparently, the prosthetics chief Neill Gorton has been working on monster costumes for years so that, once an episode like this came up, he’d have a ready-made menagerie of aliens with which to populate it. He doesn’t disappoint; the array of aliens is astounding, many of them sporting an unsettling Guillermo del Toro style to their look (indeed, while most commentators are comparing to the classic Mos Eisley Cantina scene, to me it is far more reminiscent of the Goblin Market in Hellboy II.)

As well as the impressive visuals, sound plays a more important part than in any episode previously. Murray Gold’s music is absolutely gorgeous, although there are times where it is far too loud in the mix. The culture revolves not just around stories but through song; the song that Merry sings to Grandfather is really rather beautiful. On the other hand, the whispering voices of the Vigil are chilling, elevating them to effective monster status in spite of their very limited concept. 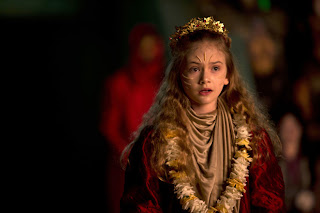 The acting, as always, is absolutely top notch. Clara’s parents make an impression even in very limited screentime, while Coleman herself is note-perfect. Clara asks the right questions and has an explorer’s attitude, with a touch of no-nonsense northerner to keep things in line. Quite rightly, Clara isn’t flattered or overwhelmed by the knowledge that the Doctor has stalked her and her family through her life. Frankly, it’s pretty creepy. Coleman brings Clara to life perfectly; she has a magnetic presence on screen. The star if the episode, however, is Emilia Jones as Merry. What an incredibly talented young lady.

So, why is it that this episode somehow feels less than the sum of its parts? There are some wonderful ideas here: a mummy trapped within a golden pyramid on an asteroid; a giant planet with inhabited rings; a song being handed from chorister to chorister for millions of years. Ironically, considering the subject matter, the story as a whole just doesn’t quite cohere. Perhaps it’s due to the necessary rush of the format; these concepts need room to be explored. This story is probably better suited to prose. In the second half of the episode, things do become incoherent. There’s little reasoning; things happen just because. The alien mummy turns out not to be the soul-devouring Grandfatherafter all. This should be a huge revelation, but it’s just thrown out there with little opportunity to understand why the villain is now not a mummy but a sentient gas giant. Again, a soul-devouring planet is a fantastic idea, but not ideally suited to being realised on the TV screen. 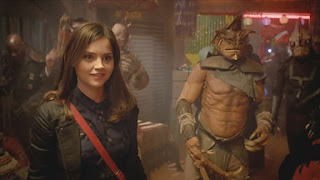 There are other major weaknesses. The sonic screwdriver is more of a magic wand than ever before, the Doctor waving it about and stopping plot developments in their tracks. The Doctor’s attempt to sate Grandfather with his vast store of memories makes thematic sense, but ultimately doesn’t work. He loses nothing – his memories aren’t gone, so where’s the drama? Ultimately it boils down to another “I am the Doctor!” speech which is fast becoming a tired cliché of the new series, although Matt Smith’s performance here is far more powerful than the similar scene in The Pandorica Opens. Clara’s scene, defeating the beast with the untold stories of her mother’s life, does redeem the conclusion considerably and works thematically.

Ultimately, this is a beautifully realised episode, albeit one that doesn’t quite hold water. One to sit back and enjoy without thinking about too closely.

Doctor Data: The Doctor reads The Beano. I knew he wouldn’t be a Dandy fan. He’s previously been to Akhaten with his granddaughter – back when he looked like popular character actor William Hartnell, and presumably before the start of the series, since he doesn’t mention Ian and Babs. He pronounces scone as ‘sconn’ not ‘scoan,’ and rightly so. 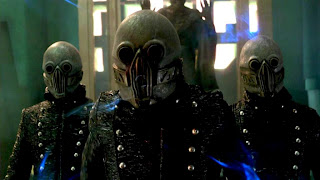 Monster Monster Monster: The alien mummy is a great creation, even if it is rather wasted here. The various aliens present include the Ultramancers – pretty groovy looking robots with red glowing eyes – and members of the species that represented the City State of Binding Light, right back in The End of the World in series one in 2005. The Doctor points out a Hooloovoo – according to The Hitchhikers’ Guide to the Galaxy, this is a “super-intelligent shade of the colour blue.” Doesn’t much look there’s one of them floating around though. The Vigil seem to be some kind of cyborg race, with skull-like faces and some nifty superpowers.


Best line: “There is one thing you need to know about travelling with me… we don’t walk away.”
Pretty perfectly summed up the series’ mission statement right there.