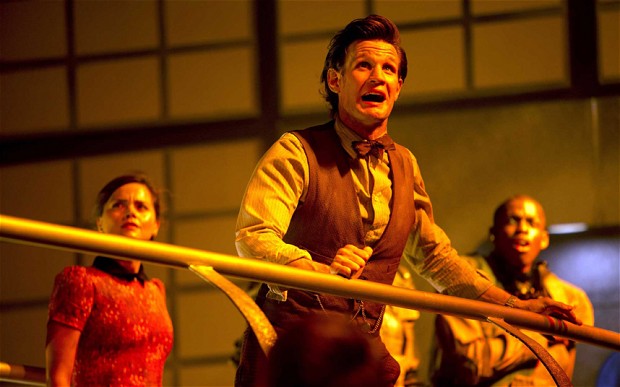 A title like Journey to the Centre of the TARDIS promises much. The Doctor’s trusty timeship is the single central icon of the entire series from its very first episode up to the present iteration, and it seemed that, in this anniversary year, we were finally going to get right into its inner workings and see what made it tick.

Only… well, we’ve had that episode, haven’t we? Two years ago, The Doctor’s Wife showed us the soul of the TARDIS, explored its labyrinthine structure and atemporal existence. The Doctor’s Wife already gave us our exploration of the TARDIS, providing the living machine with the equivalent of an origin story for a long-serving human (or human-like) character. This, then, raised the stakes even higher for the latest episode; not only did Journey have to provide an intriguing, exciting voyage of discovery, it had to outdo Gaiman’s episode and bring us even greater, more intimate revelations about the TARDIS’s character.

Under that criterion, this episode can only be regarded as a failure. I’ll accept that, with the shields down, the TARDIS was able to be severely damaged by some relatively primitive technology, even if it does make the ship seem disquietingly vulnerable. I’ll accept that the Doctor suddenly found himself outside the TARDIS and on the salvage ship, yet Clara found herself lost within the time machine’s corridors. I’ll accept any amount of frankly illogical plotting (although I’ll still revel in pointing it out) as long as it brings us to a powerful, affecting story. Journey didn’t.

There are some nice elements to the trip through the TARDIS’s interior. The rooms that contain whole environments hark back to highly imaginative moment sin the novel line, which finally gave the TARDIS the feel of something truly gigantic (even infinite, as it is claimed here). The architectural reconfiguration system, manifested as a techno-organic tree with glowing bulbs, was visually effective. The library, despite the rather obviously CG’d stacks, was an essential inclusion, the antique look summoning the baroque stylings of the eighth Doctor’s version of the Ship. I will come back to this. However, beyond these elements and some fun echoes of the past, the TARDIS seems rather hollow. Endless corridors do not make an exciting or interesting environment, even when they loop back on themselves in order to trap their occupants. Too much of the TARDIS feels just like any old spaceship.

Later on, we take a walk by the Eye of Harmony, an element of Gallifreyan lore now reinterpreted once more into something more visually impressive. The description of a star held in stasis at the moment of collapse from supernova to black hole is a fine science fiction conceit, but the roiling ball of flame by a bridge of death makes even less sense than the Eye’s previous iterations, even in the notoriously illogical TV Movie. Once we’re past this, the Doctor and Clara make it to the core of the TARDIS, an engine room that appears to be little more than a selection of gizmos spread-eagled across space with little regard to form or function. Yes, I understand that the engine had exploded and was being held in the moment, but it’s still presented as just an engine. If we’ve been taken past the mystical Eye of Harmony and into the TARDIS’s true heart, we should really be given something more than just a spacey motor. 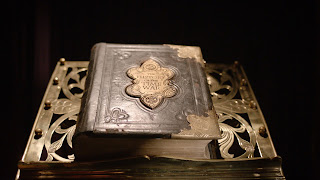 So, yes, that library; a room with much information to impart. For Clara to find, displayed proudly on a pedestal, a book charting the Time War and the Doctor’s role within it, is potentially a hugely significant development. Not only does it promise revelations about the Doctor’s past, it also suggests that the TARDIS is eager for Clara to discover it. I’m not entirely sure if I’m happy with the prospect of the Doctor’s ‘secret identity’ being revealed; I really don’t think he needs secrets to be exposed. I will, however, wait until the promised revelation finally arrives before making up my mind. In any case, the ongoing mysteries regarding both the Doctor and Clara come to something of a peak here, only for the developments to be completely thrown out the window by the episode’s end. Clara discovers the Doctor’s real name from the book in the library, while the Doctor (and the audience) discover that Clara is, apparently, nothing more than a perfectly ordinary young woman. Then the Doctor presses a literal reset switch and wipes the entire episode from the timeline.


I’m not necessarily averse to a reset switch type of ending; I’ve used myself. It does, however, have to leave something behind, for without any consequences, there is little point to a story. There’s certainly a hint that the Doctor still remembers the events of the episode, no doubt due to his unique status as a Time Lord, and I can only hope that this holds true. Otherwise, next week the mystery of Clara will still be ongoing with no progress on the Doctor’s part, and it is already threatening to become tedious. 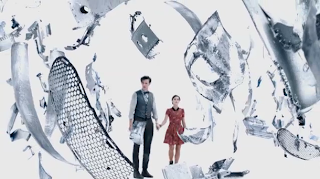 The reset also pretty much negates the development of the guest characters, although this really isn’t much of a loss. Played by three of the blandest actors ever to grace the series, the van Baalen Brothers are some of the least effective antagonists in years. At least generic monsters give you something cool to look at; these three were just some black guys in space. It’s a helpful cultural shorthand: working-class black people = untrustworthy with criminal tendencies. Now, I’m sure this wasn’t deliberate, and Doctor Who has cast many black actors in very positive roles; however, it does, inevitably, come across as an example of lazy racism. Three black people co-opted into working for the nice white Doctor with the threat of violence. It only gets worse when we look at their personalities (such as they are). There’s the greedy, untrustworthy, little clever one; the greedy, untrustworthy, big thick one; and the one who’s not so bad, but is so stupid that he’s told he’s an android and believed it.

Now, an android who is programmed to believe he’s human – that works. The other way round doesn’t, no matter how much head trauma he’s suffered. Did he never think, when he was having a wee or something, hang on, androids don’t wee? Not to mention the fact that we can tell he’s not an android as soon as he takes a drink in his first scene. The tragic thing is, the whole plot point is thrown in there just as a desperate attempt to give these characters some development. The supposed identity of Tricky, an android who has a special affinity with other machines, has a place in an episode about the TARDIS. The alternative we’re presented with makes little sense and even less impact.

Thus, it comes down to the suspense created by the monsters, which are, in all fairness, rather effective. A good, straightforward concept; burnt, shadowy figures quietly stalking our heroes through the bowels of the Ship. The conjoined brothers are particularly gruesome. Again, though, the episode promises more than it gives. Initially, it seems that the creatures are either part of the TARDIS, or prisoners within it, either of which would have been a potentially potent source of conflict between the Doctor and Clara. Once they are properly confronted, and one of them is revealed to have Clara’s DNA, huge questions are raised. Just what has the Doctor been doing in his search for the truth about Clara? Are these creatures in some way further aspects of her multiplied life? We get just a moment or two of suspicion, before the Doctor drops the news that they are the protagonists’ twisted future selves. A creepy, ghoulish concept that fits the episode’s setting well, but ultimately one that is the least interesting of the options available.

That’s the problem in a nutshell. The whole episode, from scripting to design, seems committed to being mediocre; to pulling its punches. The highlight of the episode should not be a few snatches of archived speech; the design should aspire to more than just ‘better than in The Invasion of Time’ With witless dialogue, a trudgingly linear plot and a crushingly disappointing denouement, Journey to the Centre of the TARDIS is that most frustrating of things: average.

Links and references: So, those echoes of the past in the console room. They included various bits of TARDIS-related dialogue from the whole history of the series. I managed to make out: Susan in An Unearthly Child, the third Doctor (not sure what episode), the eleventh Doctor and Idris-TARDIS in The Doctor’s Wife, the fourth Doctor in The Robots of Death, the ninth Doctor in Rose, Amy Pond in The Beast Below,  Ian Chesterton in An Unearthly Child, and I think Peter Davison in Time Crash.
As well as the library, the Arch=Rec Suite and the Eye of Harmony, the other previously mentioned location we see in the TARDIS is the swimming pool (which might be the same as the bathroom seen in the aforementioned Invasion of Time). We also see the Doctor’s cot, Amy’s TARDIS model and the seventh Doctor’s umbrella (not the question mark one, sadly).

Best line: Sorry, I've got nothing this week. All the best lines were from the archive.