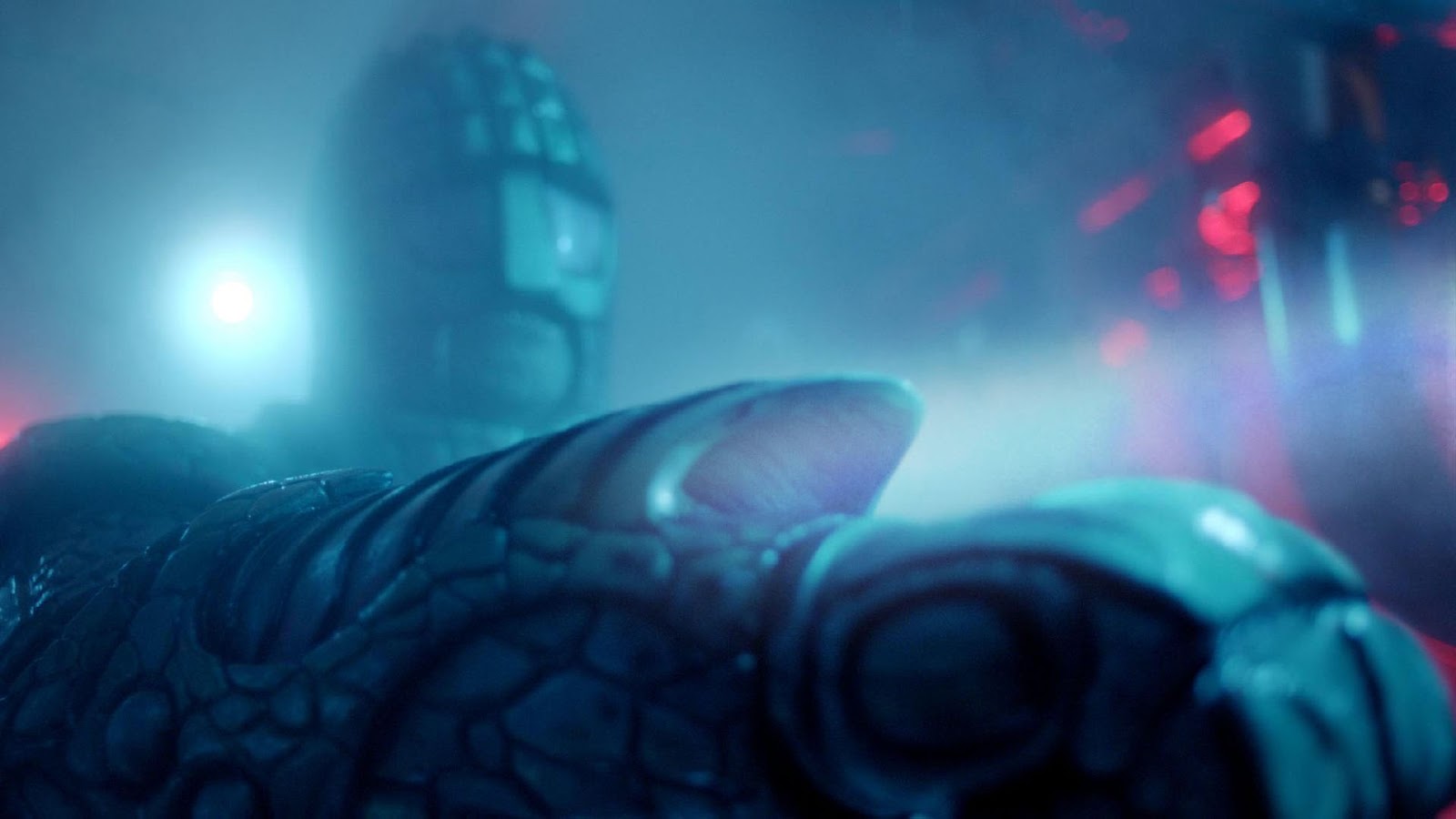 1983 is just about the latest year that I can consider to be historical. I was born in February 1984, so anything after 1983 feels like the present to me, or at least the modern period. Even though I don’t remember much of the first five or six years of my life (or much from the ages of about fourteen to seventeen, come to think of it, although I think that might be more alcohol related). The year of our birth is kind of hardwired into our perception of the world, with anything that comes before feels somehow separate.

Which is a long-winded way of saying that tonight’s episode of Doctor Who felt to me to have a historical setting. The Cold War is a sort of backstory to my existence, over by the time I became aware of the world at large, represented only by hazy memories of a wall being knocked down on the news, the knowledge that there had been until recently been something important called the Soviet Union, the hand-me-down current affairs of my parents and a whole host of eighties movies on the subject.

This means I lack the experience of Cold War paranoia that would, I imagine, give this episode the frisson of urgency it lacks for me. Intellectually, I know that if Skaldak presses the Big Red Button, a chain reaction of missile launches will send the Earth into a new dark age. Nonetheless, I fail to engage with the threat. It’s old news – the world didn’t end in 1983, after all, just as Clara says. Maybe we need a Pyramids of Mars moment in which we see a devastated world in 2013; or maybe I just need to be five years older to fully appreciate this episode’s setting.

Which is a shame, since Cold War, the episode, holds so much more for me to embrace than just nostalgia for the Cold War, the lengthy threat to international peace.  It’s all nostalgia for something, though. Nostalgia is, as I’ve pointed out before, what Mark Gatiss trades in. It’s his medium. The setting is recognisable to anyone who has seen any submarine drama, but primarily evokes The Hunt for Red October. It was probably a wise decision not to have the cast attempt Russian accents. It makes the characters easier for us to recognise, avoids any embarrassing accent anomalies, and further evokes Red October, with Sean Connery’s famously Scottish Soviet captain.

Most of all, it’s about nostalgia for Doctor Who itself. After all, we’re all here for one thing really: the big, green Martian. The Ice Warriors are one of the classic monsters, despite lacking much in the way of a concept. They are just big, green Martians, and, much like the Zygons (who are also set for a comeback), their appeal lies in their striking appearance. Gatiss, a writer steeped in the series’ mythology, recognises that to make the Ice Warriors work now he needs to do something new with them. 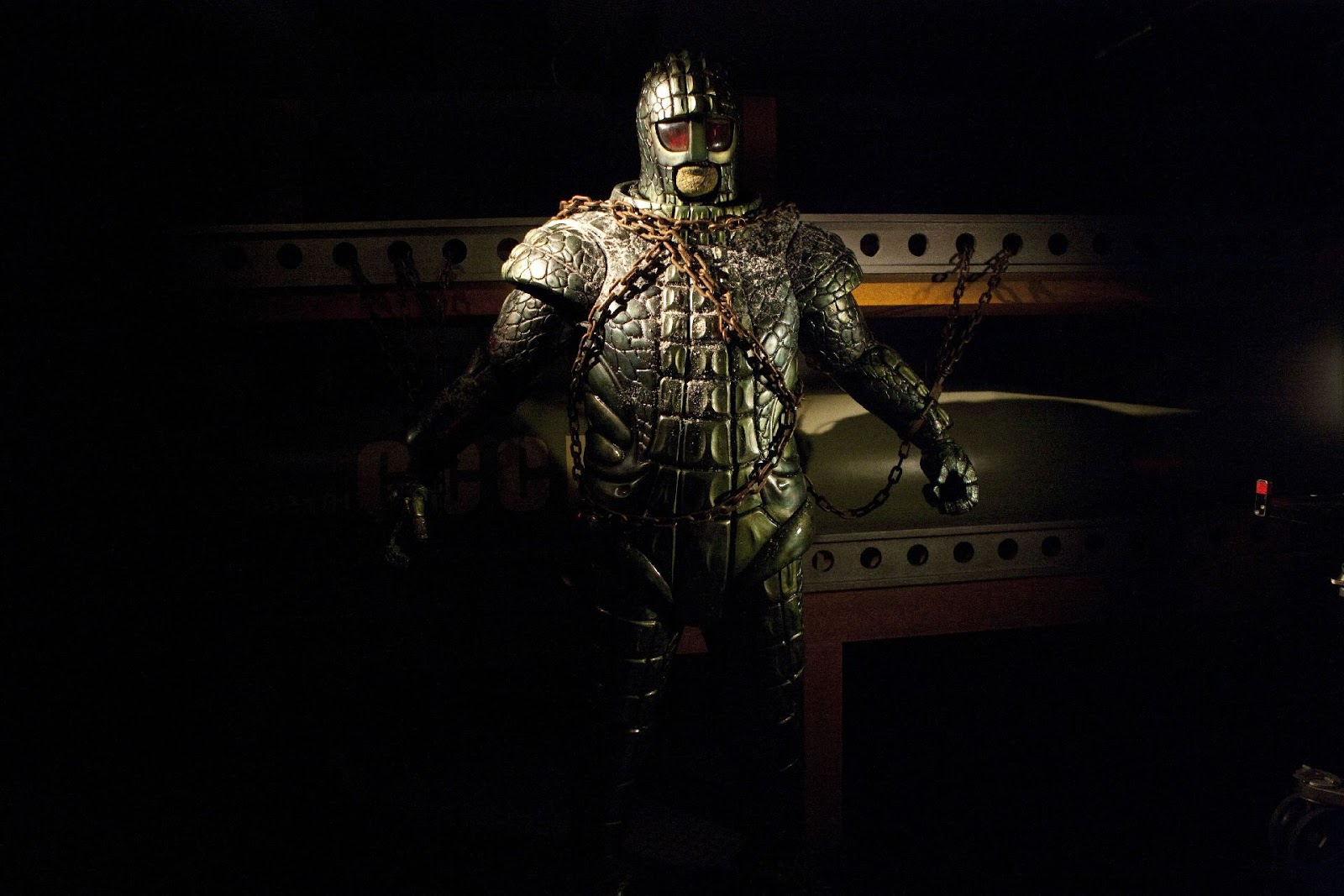 As such, we get a Warrior who the Doctor recognises as a great war hero to his own Martian brethren, a Warrior with a reputation instead of just a green grunt. Another reason the Ice Warriors worked well in their four stories in the classic series; each had a leader or representative with a recognisable personality. Added to the ranks of the thuggish Varga, the cunning Slaar, the noble Izlyr and the traditionalist Azaxyr we have the vengeful Skardak. Skardak has a personality, albeit a very one-dimensional one. While his desire to destroy humanity is ridiculously over-the-top, we can at least understand why he’s so pissed off with these aggressive, paranoid humans.

The designers have wisely stuck to the Ice Warriors’ classic look, streamlining it while keeping it faithful to the original and retaining its impact. Sure, it looks a little plasticky, but that’s unforgiving HD for you. Spencer Wilding does a good job of animating Skardak, but it’s Nick Briggs who deserves the credit for bringing him to life. The voice he uses for Skardak is proud, arrogant and retains just enough of the Martians’ reptilian hiss. Having Skardak escape from his shell is the one element of this episode that surprised me, giving us something new while riffing on a well-remembered monster. Sadly, it is also the element that works least well visually. While having the reptilian creature slithering through the ducts picking off crewmen is atmospheric in the extreme, the rubbery hands dropping down from the ceiling are woefully ineffective. It really does look like an eighties movie. 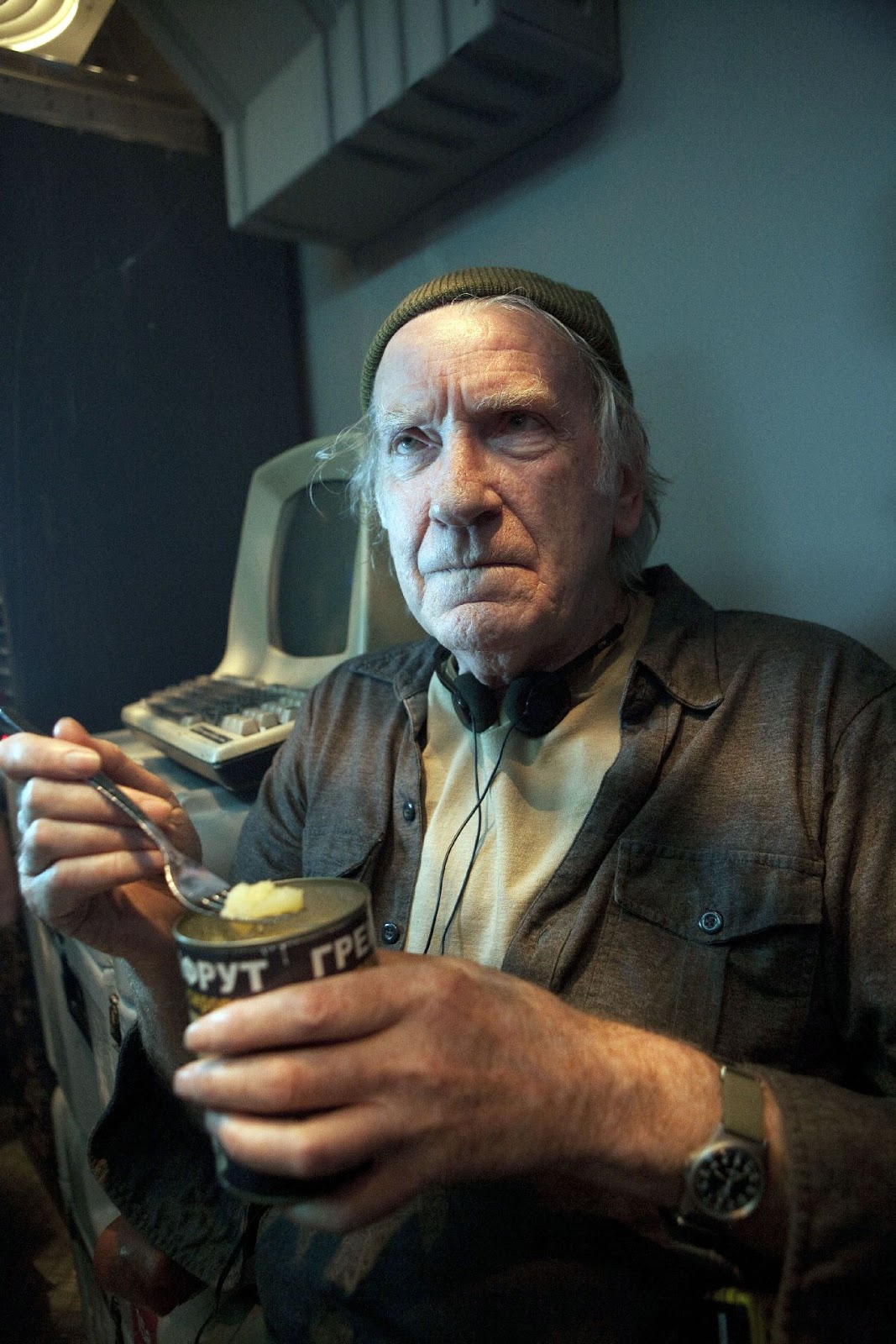 The cast is uniformly impressive, but certain actors require special mention. Liam Cunningham strikes a fine balance between the dutiful, the fearful and the good-humoured as Captain Zhukov. Tobias Menzies is equally as good as Lt. Stepashin, although he has less time to make an impressive before he gets bumped off. It’s David Warner who steals the show, though. It’s long past time that he made an appearance in Doctor Who, after years as one of Big Finish’s most celebrated voice actors. The man is pure class, and his Ultravox-quoting scientist Professor Grisenko is a delight.

It’s the plot that lets the episode down. Gatiss gets a hard time from a lot of commentators, but I generally love his episodes. It’s strangely appropriate, then, that the episode that everyone is raving about immediately after broadcast is the one of his that didn’t impress me so much. While I have no problem with a straightforward episode that uses tried and tested elements (see my review of The Bells of St. John), an episode this simple and predictable is something of a letdown. The ending, in particular, deflates the drama rather than letting it reach a climax, with the Martian ship arriving and basically switching off the plot in time for the end credits. I’m sure I’ll come back to it again and again for an easy watch, but it will never be a truly satisfying episode. Don’t get me wrong; this was a taut, fun, pacy thriller with some fine performances, excellent direction and a cracking monster. Somehow, though, I felt it was a bit of a letdown. Would it be too glib to say that it left me a little cold?

Doctor Data: The Doctor’s piloting is worse here than we’ve seen it in years. He’s aiming for Vegas and arrives beneath the Arctic Ocean. Lovely to see the HADS in action again; another nice shout-out to the past, as well as an effective way of removing the TARDIS from the action to prevent it from spoiling the story. The Doctor’s respectful attitude to the Martians is a far cry from his animosity towards them in his second and third incarnations. 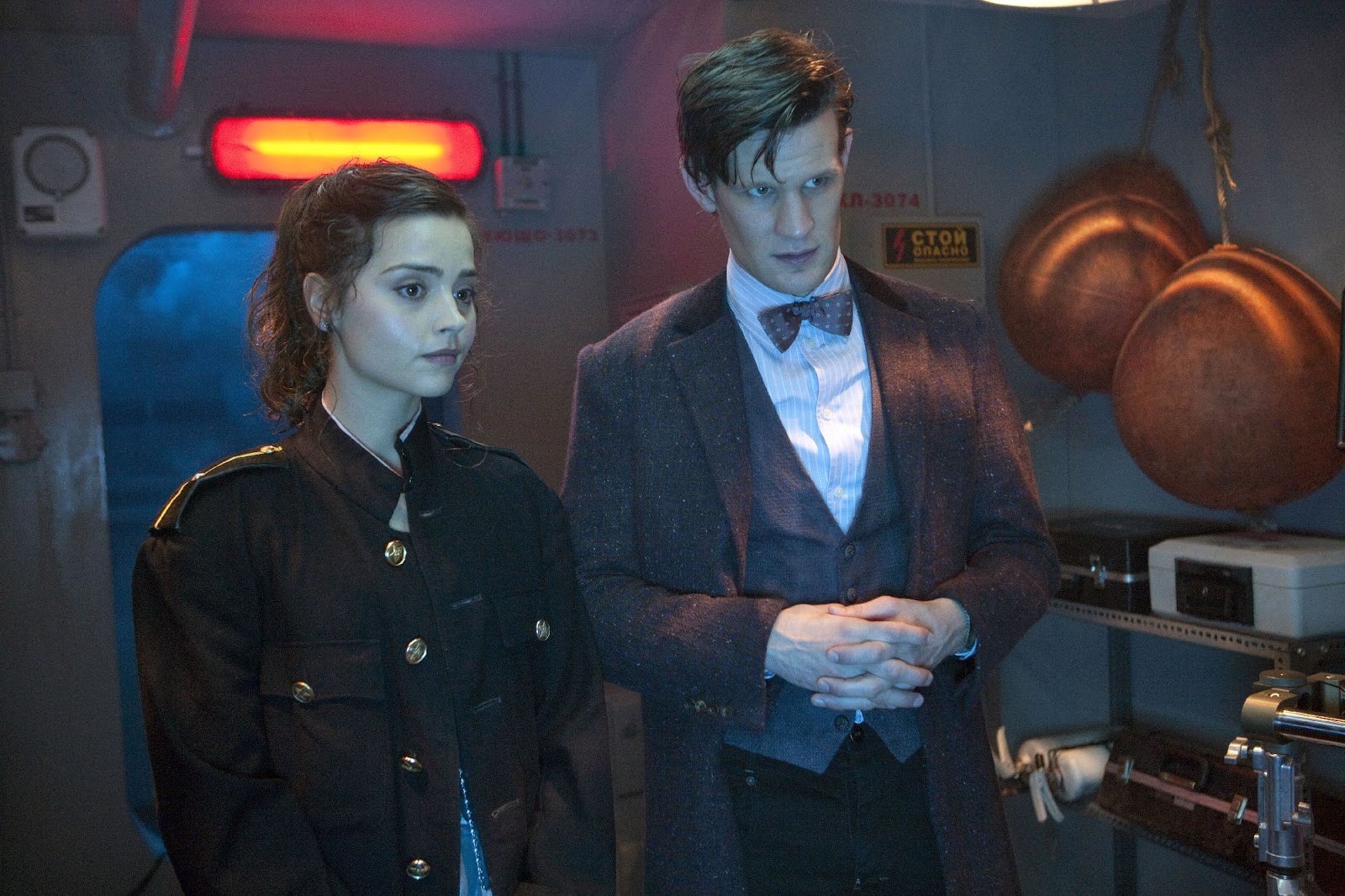 Monster Monster Monster! It’s been almost forty years since we last saw the Ice Warriors onscreen, although they have made many appearances in the spin-off media (they even met the eleventh Doctor in Dan Abnett’s novel The Silent Stars Go By). Skaldak is a Grand Marshall, one of the highest ranks in the Martian military, although he lacks the spangly caped look that other high-ranking Martians have displayed in the past. What he was doing on Earth 5000 years ago remains a mystery. In fact, Martian history in Doctor Who is such a hotchpotch that Gatiss was never going to have much luck making sense of it in this episode, and sensibly he sticks to the conclusion that the Martians are out there, just not on Mars. This doesn’t fit with all their appearances, but it’ll do for now. It’s good to see the biomechanical nature of the Warriors built upon; they’ve been cybernetic since their first appearance, but it’s never been fully explored.

(Pre)history: I was a little confused that the Professor would think a 5000-year-old body might belong to a mammoth, considering that the woolly mammoth common to Siberia became extinct on the mainland about 10,000 years ago. However, a little research shows that some remains as young as 4000 years old have been found on Arctic islands, so it’s not impossible. Alternatively, perhaps the Professor was kindly translating the timescale into Martian years.

Hanky-Panky in the TARDIS: Clara arrives in a sexy party dress, and then gets absolutely soaking wet. Oh my.