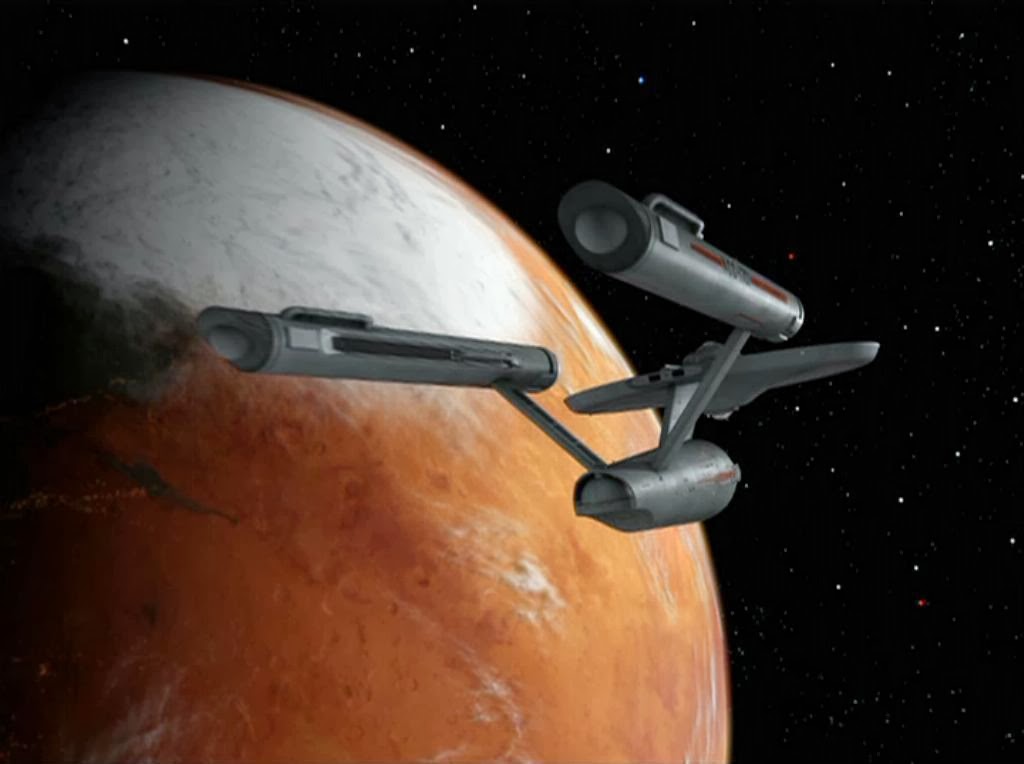 Planets visited: Vulcan. A reddish planet from space, the region we see – Spock's family grounds – is an arid area with ruins hewn from rock, and a deep red sky. The surface conditions are oppresively hot, hence the saying “As hot as Vulcan.” The Enterprise requires permission to enter orbit from Vulcan Command.

Alien life forms: Vulcans. For the first time we meet some pure-blooded Vulcans, and there is no visible difference between them and the half-human Spock. Every seven years, Vulcans (just males?) unergo the ponn farr, a surge in sexual desire and violent urges. Their normally suppressed emotions rage and they lose their self-control. They're so ashamed of this that they dress it up in ritual and ceremony, and refuse to speak of it to off-worlders. This isn't terribly logical of them, especially for a Vulcan in Starfleet. Vulcans have their partners chosen for them as children, and are psychically bonded to them. When the ritual begins, the male Vulcan goes into a “blood fever,” and loses himself to his urges.

The female Vulcan has the right to demand her mate prove himself in combat, and can select anyone she chooses as his opponent. The violence of combat can be enough to end the blood fever. The rituals of ponn farr are protected by a priestess and a sort of guard/executioner, a masked man with a huge axe. There are also guards around the site, and chair carriers, wearing Romulan-styled helmets. 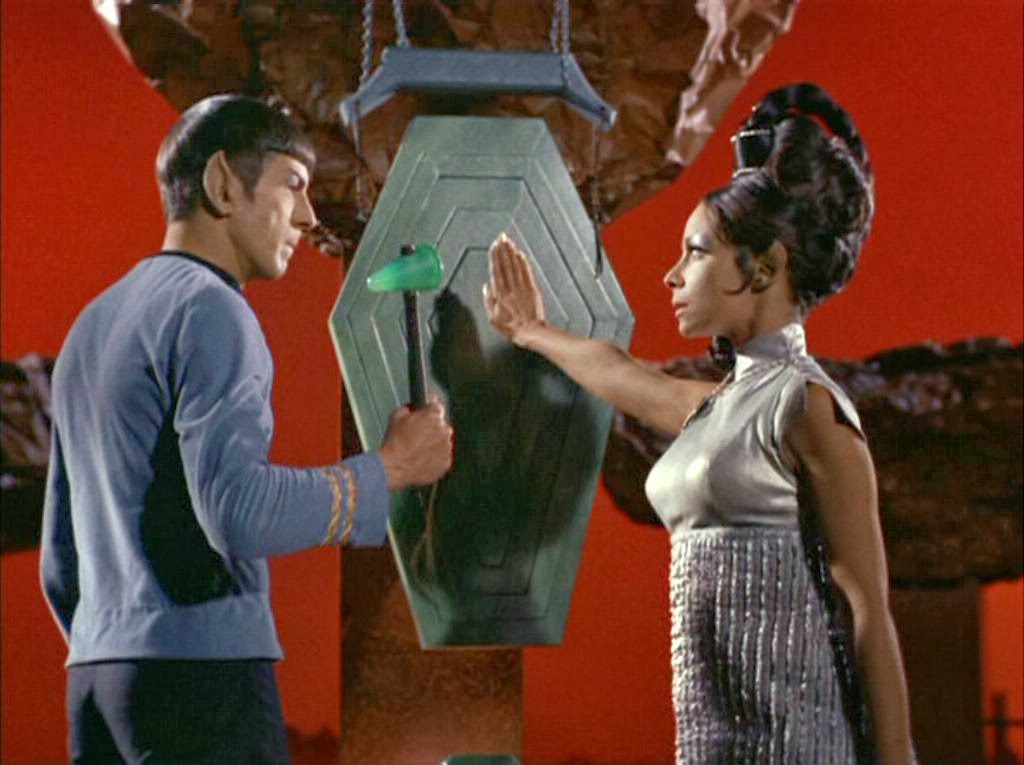 Green-Blooded Hobgoblin: He's been acting strangely for weeks, getting aggressive with McCoy and refusing to submit to his regular physical. He lashes out at Nurse Chapel when she brings him some food. Despite the fact he must have been expecting his ponn farr, he hasn't made any plans to take leave, and now has to demand to return to Vulcan in a panic. When Kirk is ordered to take the ship to Altair, Spock alters course and doesn't even remember doing so. He is devastated when he thinks he's killed Kirk in combat, and is prepared to hand himself in to the authorities. When he sees that Kirk is alive, he is absolutely overjoyed, and grabs him (he looks like he's just about ready for a bear hug). It's a great moment.

Leonard Nimoy is fantastic throughout, playing Spock with barely restrained anger mixing to disorientation and panic.

Captain James T: He's completely supportive of Spock, but is torn between his friend's needs and his orders. He pushes Spock to admit what he's going through before he commits to getting him back to Vulcan. He risks serious discplinary action for disobeying roders to help his friend. He is accepts the order to fight Spock when he could leave... before he learns that it is a fight to the death. He has a great deal of respect for T'Pau.

The Real McCoy: Notices Spock's out of character behaviour before Kirk does. He also works out what's wrong with Spock, eventually, and insists on coing down to Vulcan with him and Kirk. He's a cunning one when he needs to be, fooling everyone into thinking he's given Kirk a tri-ox compound to up his stamina, but actually gives him an anaesthetic to fake his death.

Sexy Trek: Well, the whole episode is about sex. Aside from his betrothal to T'Pring, Spock gets a great deal of attention from Christine Chapel. When he eventually comes on to her, she rebukes him; she clearly knows that he isn't expressing his real feelings. They end it on good terms, though. T'Pring rejects Spock for her hunk of Vulcan man-beef, Stonn.

Famous Firsts: As well as the first appearance of the planet Vulcan and full-blooded Vulcan characters, we get the first instance of the Vulcan salute (by T'Pau) and the now famous phrase “Live long and prosper,” by Spock. This episode also includes the first appearance of Walter Koenig as Pavel Chekov, introduced to the regular cast as a new, younger character to maintain teen interest. At the moment, Chekov gets little to do aside from swap banter with Sulu, but the two do make a good team at helm and navigation. 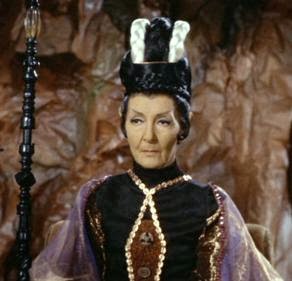 Stellar Cartography/Future History: The Altair system is clearly of some major importance in this period. The Enterprise is one of three starships attending the inauguration of the new president of Altair Six, following the resolution of a long interplanetary war (within the Altair system, or between planets in neighbouring systems?) The event is expected to “cause ripples that will visible as far as the Klingon Empire.” Altair is, of cours e, a real star, also known as Alpha Aquilae, a mere 17 light years from Earth. Altair Four was the setting of the movie Forbidden Planet (Trek spin-off fiction has often made tongue-in-cheek references to Krell ruins in the Altair system).

Trek Stars: Viennese actress Celia Lovsky gives a very dignified performance as T'Pau, the Vulcan high priestess. The performance has become quite legendary among Trekkies, with T'Pau being the cornerstone of Trek class. T'Pau is the only person to have turned down a seat on the Federation council, and has enough a clout to get the Enterprise officially diverted from its mission, retroactively speaking. Even Kirk is impressed by how well-connected Spock's family is. T'Pau reappeared (pre-appeared?), much younger and less Austrian-sounding, in Enterprise in 2004, and gave her name to the classic eighties band fronted by Carol Decker. T'Pol in Enterprise was intially written to be a younger T'Pau, but this idea was vetoed. 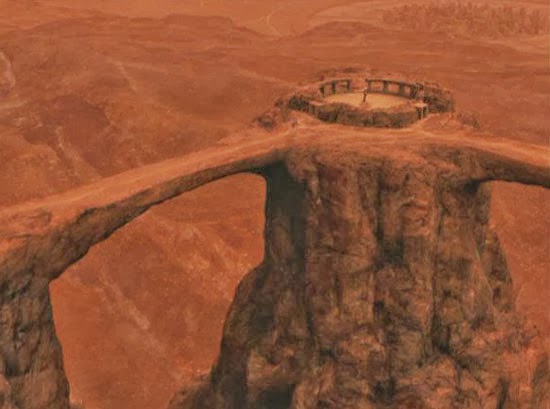 Remastery: This episode is a showcase for the remastering process. As well as the usual clean-ups, there are some major new space shots of the Enterprise approaching Vulcan, and some incredible new CG shots of the surface of Vulcan. The original footage of the main trio are either superimposed over or replaced with majestic views of the Vulcan ruins, which take their cues from vistas seen in The Motion Picture, the Animated Series and Enterprise.

The Verdict: Staggeringly good. For the first time, Star Trek creates a believable alien culture, rather than a bunch of cyphers. Vulcan culture is revealed to be a turbulent mix of rationality, ancient spiritualism, and bestial violence. Quite apart from this fleshing out of the culture of the series' biggest star, it's tempting to see this as author Ted Sturgeon's exploration of the similarly contradictory facets of human nature. Setting an episode – a season opener, no less – around a major character's desperate need to get laid was one hell of a ballsy move for 1967. Respect for both the series' creators for trying it,a nd for the networks for showing it. They refused to show this uncut in Germany for thirty years, hacking it to pieces and dubbing it with alternative dialogue about “space fever.” In spite of the risky material, this episode entered popular culture; everyone knows that Spock only has sex once every seven years. It's Nimoy who really sells it, of course, with a truly remarkable performance, but the three leads are at the top of their game, cementing the friendship between the trio. Fascinating stuff.
Posted by Daniel Tessier at 20:55