REVIEW: X-Men: Days of Future Past 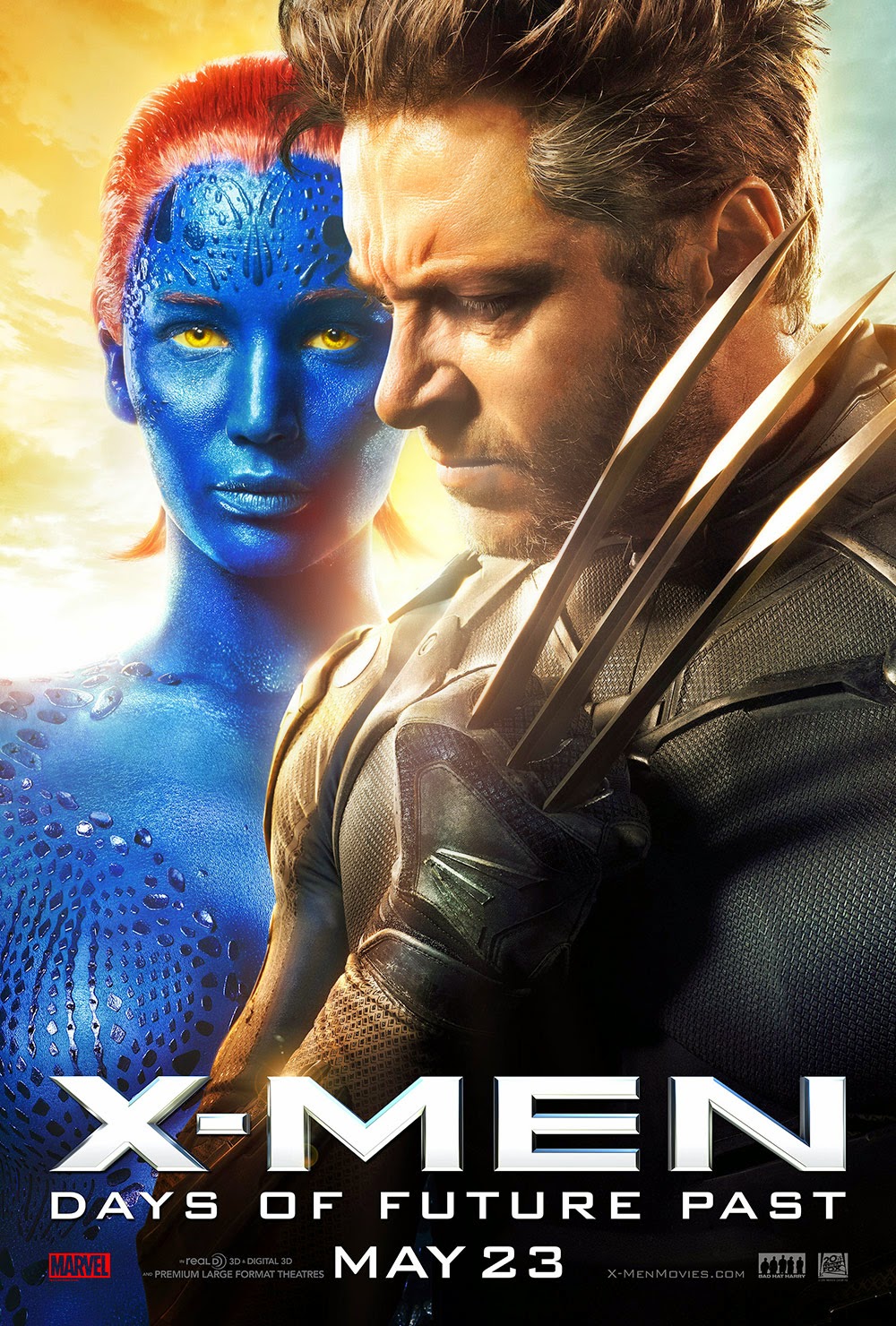 So, here's my somewhat belated review of the seventh movie in Fox's X-Men franchise, after everyone else has posted theirs. I guess this means I can speak quite freely regarding plot points, so if you haven't seen it yet and have still managed to avoid spoilers, best stop reading now. In short, I loved it. Days of Future Past is easily the best of the franchise since X2, and the fact that Bryan Singer is back to direct is no coincidence there. Like X2, this movie has a fairly straightforward plot made apprently more complex by all manner of extra elements and a large cast of remarkable characters, and like X2, Singer and his scriptwriters manage to keep things clear, entertaining and fast-moving.


The decision to bridge the gap between the young cast of X-Men: First Class and the older cast of the earlier trilogy is a timely one. It's been fourteen years since the first X-Men came out, which, despite my seeing in a cruddy cinema on a very unsuccessful date, has become a favourite. Singer's first instalment not only kicked off a franchise, but a whole new generation of superhero movies, which until then had been an unfashionable relic of an earlier period of film. Sadly, the X-Men franchise flagged after Singer's departure, with X-Men: The Last Stand fairing poorly due to some illogical plotholes, fluffed character work and an overloading of new characters, which detracted from its many plus points. The less said about the misconceived Origin: Wolverine the better. The follow-up to this, a Magneto origins film, was itself mutated into the altogether more palatable First Class, which mixed modern sensibilities and characters with the comic's roots and revamped the saga. If there was to be a crossover between the two generations, it really had to be now, while the ageing cast of the original are still at the top of their game and the original films still fondly and clearly remembered.


Tackling the Days of Future Past storyline must have been a no-brainer once the time travel element was decided upon. The apocalyptic future sequences – set in 2023, ten years after the print version – are breathless but brilliantly done. A whole film of this would be too much, but opening the movie with it, and periodically snapping back to see it, holds the film together and maintains the stakes. Events in the seventies and events in the future feed into one another, keeping the plot tight. The future cast have less screentime than their past equivalents – with the obvious exception of Hugh Jackman – but all do very well with what they're given. Patrick Stewart, especially, is effortlessly classy as the elder version of Professor Xavier, while Sir Ian McKellen takes to his more heroic role. It's rewarding to see Professor X and Magneto side by side, even under such terrible circumstances. I still feel that Ellen Page is somewhat wasted in the role of Shadowcat, but at least she gets some far better material to work with than she did in The Last Stand. Halle Berry remains woefully miscast as Storm, but this isn't really a problem here, as she is mostly there to provide pyrotechnics.


Of course, the man holding it all together is Hugh Jackman. It's a sensible choice, making Wolverine the star of the film. He's been the most popular character and actor of the franchise, proving his surprising casting back in 1999 absolutely right. Jackman has been the lead in six of the X-Men features now, and the only actor to appear in all seven. Making Wolverine the character to travel back in time makes perfect sense from a logistical perspective, although if they'd really wanted Shadowcat to be the one to do it, they could have just made it a physical time jump instead of a mental journey. Nonetheless, it works better this way; not only is Jackman the favourite face of the franchise, he can handle the action scenes in a way that Ellen Paige certainly wouldn't have. Of course, they could have picked anyone from the cast had they so chosen, but let's be honest, it's Jackman that pulls in the punters.


The Wolverine, while flawed, gave Jackman the chance to play a more mature version of his character, developing to the point where he was finally becoming comfortable with his nature. Setting this a further ten years or so on gives him the opportunity to play a version of Logan who has finally come to terms with himself. It's a calmer, more reserved take on the character, and this is part of the best elements of the movie. The more mature Logan gets to act as a guide and mentor to the young Xavier, a fascinating role reversal that ties DOFP back to the first film and keeps things fresh.


James McAvoy soars as the younger, damaged Xavier. Taking away his need for the wheelchair is an intriguing decision, brilliantly justified. Not only does it allow Xavier to take part in the showstopping prison break scenes, it also illustrates his desperation and the lengths to which he has gone to cope with his loss. We've never seen Xavier like this, a broken man, and it's an essential stepping stone from the buoyant, cocky young man of First Class to the wise elder statesman of the trilogy. While there is still little common ground between the performances of McAvoy and Stewart, we can believe the one man growing into the other. The lack of telepathy also allows the writers avoid the obvious issue that he could simply read Logan's mind, and inject some drama into their meeting.


It also ties nicely into Hank McCoy's inclusion in the story. The omission of the Beast from the first two films always seemed an oversight (perhaps just because he's always been a personal favourite), and the casting of Kelsey Grammar in The Last Stand, while perfect, was wasted on that script. Nicholas Hoult was a fine choice to play the younger McCoy in First Clas, and he works well here as Xavier's carer and right-hand man. I could never understand fans' griping at the character's variable appearance in the films from his cameo in X2 to the trailers for this DOFP. Beast's appearance in the comics has varied hugely over the years, as he flitted back and forth between pink and hairless, grey and simian, blue and feline... McCoy's genetic serum is thematically sound, allowing both him and Xavier to suppress who they really are. While Xavier is presented as an addict, lost to depression, McCoy is simply still struggling to come to terms with who and what he is. His transformations into full-on Beast mode are an easy one for audiences raised on Hulk stories to comprehend (we've already started referring to it as 'Hanking out').


Then there's Michael Fassbender as the younger Magneto. He has leading man looks and charm, but can pull off a sinister turn with the best of them. He's very much channelling McKellen here, with certain scenes verging on impersonation. However, some of his most powerful moments are when he is in reduced circumstances, as in his imprisonment (beneath the Pentagon, for some reason) and his final fall from grace. As essential as his inclusion is, you've got to wonder why future Magneto ever suggested he was necessary for the mission. After the, admittedly thrilling, prison break, Magneto does little but provide Xavier with someone to be at loggerheads with. Once events get moving, he's a massive liability, turning on the team and getting straight back to his mutant superiority campaign. Considering that one of his major skills is stopping bullets, he really doesn't help much in preventing an assassination. He does look fantastic in a hat, though.


There are so many excellent cast members that it's hard to know where to stop. Peter Dinklage is, as always, a class act. There are occasional touches of Tyrion Lannister in his calm, collected, but fanatical Bolivar Trask. Jennifer Lawrence has come in for some flak for her performance as Mystique, but I really don't understand why. She gives a beautiful performance as someone who has become lost in their desire for justice, ever more out of her depth. You can see her taking the steps that will turn her into the ruthless bitch that she was in the original trilogy. She threatens to steal scenes from any of her male castmates, something that is not easy to do with the talent on display here. There are a lot of characters running around here, but unlike The Last Stand they are all well used – with the exception of Anna Paquin's Rogue, almost wholly cut from the film. Worthy of special mention though is Evan Peters as the young Quicksilver, Peter Maximoff. Making Quicksilver cool for a modern audience and making him work onscreen was never going to be easy, but this cocksure young thief is a highlight of the film. The slo-mo gunfight scene, in which Peter calmly saunters through the swarm of bullets and debris tweaking trajectories (not stopping bullets, my physics-brain rejoices) is fantastic. I usually hate slow motion in films, but this actually worked to sell a concept, instead of just being used to pad out a scene. We can only hope Quicksilver is done half as well in the upcoming Avengers sequel. Altogether, Days of Future Past is visually spectacular, as can only be expected. The Sentinels, in both their guises, are fantastic – although I prefer the retro-flavoured seventies version.


The most striking thing about this storyline is that everyone is, in some way, justified in their prejudices. Trask is right to fear the mutant uprising. Magneto is an absolutely terrifying foe, one that proves that some mutants genuinely are a threat to humanity as a whole. Yet he, equally, is justified in his fear and hatred of ordinary humans, by the actions of Trask and his supporters. There is little right here, just a succession of wrongs. Even Xavier has the potential to be a horrifying threat; someone who can not only read minds, but control them, and totally convinced of his own moral superiority. In the event, Xavier, Shadowcat and Logan alter fifty years of history to their own benefit. It's easy to understand why people would be so frightened of them. It's a powerfully entertaining, over-the-top but provacative film, effectively capping the fourteen-year-old franchise and wiping the slate clean for a new era. It's not a bad idea, rebooting without erasing the past, muchlike the new Star Trek series. Overwriting The Wolverine only a year after its release may be a little overzealous, but this is Marvel – there are multiple realities stacked alongside each other by tradition. (Officially the X-Men movies up to this point are set on Earth-10005; the new timeline lacks an official designation so far. I am a geek.)


Both as a capstone to a long-running series and the birth of a new one, and as a stylish sci-fi actioner in its own right, Days of Future Past is cracking movie. Just please keep Bryan Singer for X-Men: Apocalypse.