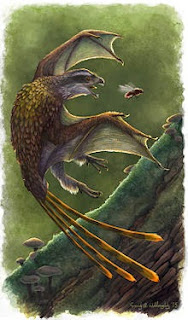 This is the most fantastic discovery this year. Yi qi is a frankly bizarre flying dinosaur that displays features of both birds and bats, an entirely new method of flight adaptation to anything seen before. A member of the scansoriopterygidae, or epidendrosauria, Yi's relatives are extremely birdlike, with complex feathers, but with extended fingers that suggested, at first, that they were arboreal animals, adapted for climbing. Yi is so well preserved, however, that the fossil has revealed skin impressions, including webs of thin skin between the fingers. At first glance, illustrations of Yi look like archaic illustrations of pterosaurs, but this is a genuinely new form of dinosaurian flight - a combination of batlike wings with birdlike feathers. It's unknown if fellow epidendrosaurs shared this feature, but it seems quite likely. It's a fascinating sideline on the evolution of the flight of modern birds.

Microscopic analysis of the Yi fossil has revealed the presence of melanosomes - pigmentation organelles. The dinosaur was mostly coloured black, with yellow or brown feathering to its head. Yi is thought to have inhabited a subtropical environment, and shared it with pterosaurs such as Changchengopterus, Arboroharmiya, a tree-dwelling mammal, and archaic salamanders. Yi also has the distinction of having the very shortest generic name of any dinosaur; indeed, its full specific name, Yi qi (meaning "strange wing"), is as short as is permitted by taxonomic rules.

This is an odd one. Supposedly, Chilesaurus is a basal tetanuran, roughly ancestral to the group that led to carnosaurs, coelurosaurs and megalosaurs. And yet, it has features from all sorts of different dinosaurian groups. While its features are mostly theropodal, its teeth clearly indicate herbivory. Its pelvis points backwards, as in the Ornithischia, another adaptation for herbivory - more room for a big, fermentory gut. Several theropod families adapted to that lifestyle and developed the bird-like pelvis, including therizinosaurs and, of course, birds themselves. Chilesaurus had strong arms with a large, sharp primary claw, which is found in many "prosauropods." In fact, just looking at it, I'd guess it was a basal sauropodomorph, which are very similar to basal theropods, but the timing is wrong. It's a Tithonian species, late Jurassic... all most odd.

An ancient bird, Archaeornithura existed 130 million years ago in the early Cretaceous, and is the earliest example of the Ornithura, the clade of "true birds" that includes all modern birds and many extinct lineages. Although it retained many archaic features, such as clawed fingers, it also displayed several modern characteristics including fan-shaped tail feathers, a familiar wishbone, and an alula - the highly adapted thumb that aids in avian flight. Indeed, it seems to have been an adept flyer, while its long legs and foot structure suggest it also lived as a wader. The discovery of the beautifully preserved fossils of Archaeornithura has necessitated another rethink of bird evolution, since such advanced characteristics were not thought to have arisen so early.

A rather lovely name for a dinosaur, Nebulasaurus. A basal eusauropod, albeit only represented by a partial skull, there's not a great deal it can tell us about early sauropod development. However, it does increase the diversity of sauropod findings in China, the Yunnan region being a particularly fossil-rich part of Asia. Nebulasaurus lived around 170 million years ago in mid-Jurassic. 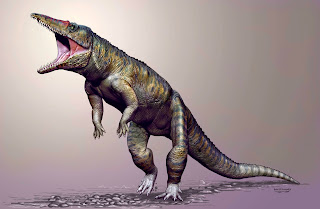 With a cracking name (meaning "butcher"), Carnufex was a beast of a croc, ten feet long and five feet tall (and not even fully mature at that size). An near-complete skeleton was found in North Carolina, in the Carnian stage of late Triassic rock. An early crocodylomorph, Carnufex is more advanced than the brutish rauisuchians that ruled the early Triassic, but still basal to true crocodilians. It had a long, narrow snout full of serrated teeth, with a skull covered in bumps and grooves that may indicate some kind of horns or other adornment.

An early marine reptile, ancestral to the icthyosaurs, that lived in shallow waters in the early Triassic. Unlike later, true icthyosaurs, Catorhynchus was a small, probably amphibious animal with legs adapted into flippers not unlike those of seals. It had dense bones, that would have helped weigh it down and allowed it to feed on the bottom of shallow coastal waters. It is surmised that it was a suction feeder, hoovering up soft-bodied prey from the seabed. The most primitive animal that can confidently be called an icthyosaurimorph, it helps shed light on the development of the Icthyosauria, which otherwise appear out of nowhere in the fossil record following the catastrophic Permian extinction event.

In spite of the name, this is not a dinosaur. It's not even a reptile. They used the name Yoshi for a fossil and they didn't keep it for a dino? There should be a rule against that. Yoshi garveskii was a big cat, a Metalurine felid, one of the "false sabretooths" like the more famous Dinofelis. Previusly included in the genus Metalurus, Yoshi was a mid-sized animal, larger than a lynx but not as big as a cheetah, so fairly diminutive for the family. Unlike true sabretooths, which had oversized, blade-like teeth, Metalurines had what might be called medium-sized fangs, conical like modern cats' but significantly larger. The best thing to imagine would be a particularly toothy clouded leopard.

I love anomolocarids. Half a billion years ago, the lands were empty but the seas were full of bizarre creatures which have left no descendants. The anomalocarids might have been related to arthropods, like insects and crustaceans, but have so many weird features that no one is really sure what they are. One thing we do know is that they dominated the oceans of the Ordovician period, gigantic predators for their time. Aegirocassis lived 480 million years ago, descended from earlier hunters like Anomalocaris itself and had adapted itself to filter feeding. At over two metres long, it may not sound like a particularly huge beast (although I wouldn't want to meet one on the beach), but it was probably the biggest animal in the world at the time. It was essentially the Ordovician equivalent of the blue whale, only with a shell and tentacles. What a wonderful creature. 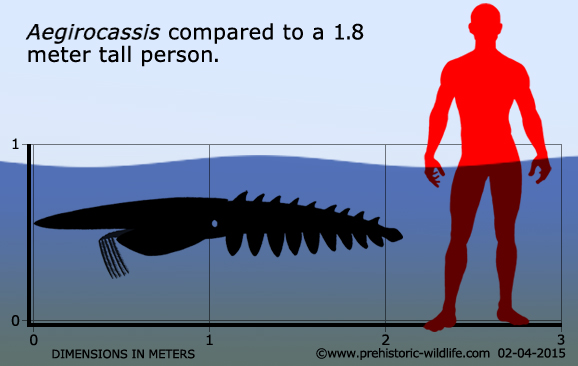