"These are the spectacular adventures of Space Dandy and his brave space crew... in space!"


It's the zombie episode! Everyone dies. Everyone in the universe.


We're Alien Hunters, Baby: The Stiltonians are a species of greenish alien slugs with manipulating tentacles. They are characterised by fast movements and quick reflexes, but are gentle and friendly. Unlike the one that Dandy and crew capture, because it is a zombie Stiltonian, that starts the whole zombie pandemic by biting Meow. There are many, many different species in the Galaxy Hospital, from the green, beaked doctor, the elfin nurses and what looks like some kind of horrific walking anus. 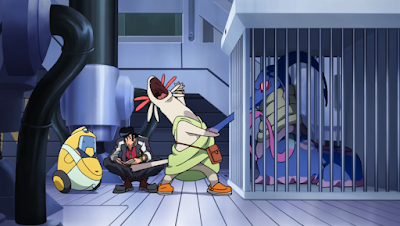 He's Just a Little Obsolete, Baby: At least QT is observant enough to see that something is wrong with Meow. It's pretty unlikely Dandy would have survived any time at all without QT to keep an eye on him. Dandy repays him by stuffing him into a marauding zombie beast's mouth. In fairness, Dandy reasonably believes that robots can't be zombified; he is, however, mistaken, and QT joins the ranks of the undead.


He's Dandy, Baby: Basically brushes off any concern for Meow until QT manages to convince him to take a trip to the Galaxy Hospital, whereupon Dandy is very happily surrounded by numerous nubile space nurses. None of them have any interest in him, not that this discourages him in any way. Neither illness nor imminent zombification are enough to quite put Dandy off the quest for space nurses. At least he likes chicks who are “both hot and smart,” so it's not like he doesn't have standards. It really does take a lot to phase Dandy, but a hoard of zombies does freak him out.


Dandy displays some pretty ninja moves when battling the twin threats of bounty hunters and zombies, and is able to escape from Galaxy Hospital via helicopter. Unfortunately, the pilot is a zombie. After zombification, Dandy and crew's un-lives carry on much as they did before, only more dead. They still go to BooBies, after all. After a few months, Dandy remembers a life insurance policy he took out when he was trying to bang a saleswoman, and cashes in.


There's Bad Guys Too, Baby: Dr. Gel is still on Dandy's trail on the behest of Admiral Perry, who has employed some bounty hunters to help track him down. The mercenaries are a mixed bunch of aliens, led by pink arachnid with a Scottish accent. As ruthless as they are, they're not prepared for the zombies. Later, Dandy and co have to contend with hired assassins employed by the insurance companies to take out the zombies, which are bankrupting them.


Being Dead is Hard, Baby: Zombification leads to an emotional cycle of despair and the urge for raw meat. It is, however, preferable for a zombie to eat yoghurt, which is full of helpful bacteria. Zombies can communicate using a series of surprisingly subtle moans and grunts. Bright sunshine is also helpful in maintaining freshness. Many zombies have an inexplicable desire to spend time in the mall. Eventually, all life in the cosmos is zombified, and finally, universal peace is achieved.


The Bottom Line, Baby: Romero references abound in this episode, from the mall gag to the trio sitting down to watch one of his movies at the very end. Ridiculous fun, full of bizarre aliens, zombie cheerleaders, zombie babies, zombie fridges... Even the Narrator, who has a much larger role to play once the episode becomes otherwise dialogue-free, ends up zombified (a pretty odd turn of events, considering later revelations). I have been watching all these episodes with the English dub, rather than in Japanese with subtitles; whatever purists might say, the English script is fantastic and the performances, especially by Ian Sinclair as Dandy, are worth it. This is, however, one of those episodes when subs are needed as well, since much of it is in Zombie-ese and this isn't dubbed for some reason. 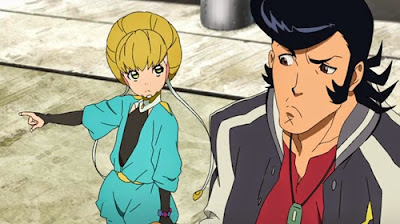 Series One, Episode Five - “A Merry Companion is a Wagon in Space, Baby”


We're Alien Hunters, Baby: Gentooans are small, childlike humanoids that display a pair of tendrils that allow them to extract an attacker's consciousness and place it in a puppet. In the case of Adelie, the Gentooan Dandy is tracking, the puppet is a small, orange penguin with six eyes. This exchange only lasts 666 seconds and can only be performed once a day. Due to their extreme rarity and the difficulty catching them, a live Gentooan is valued at an eight million woolong reward by the Alien Registration Centre. However, some less salubrious alien hunters have been angered by Adelie's humiliating defeat of them and are out for revenge. Gentooans live far apart from each other, partly to keep them from being noticed by those who might misuse their abilities.


It's not entirely clear whether Adelie truly is a child or merely looks like one. Early on she suggests that her people simply remain childlike, but later dialogue makes it seem likely that she really is just a little girl and wants to be treated like an adult. Her grandfather, once he is found, is similarly tiny, but grey-haired and haggard.


He's Dandy, Baby: Dandy's really quite a moral guy; he's not likely to hurt his captives, unlike some alien hunters. He's not pleased that the Aloha Oe is towed with QT and Meow still in it. He agrees, eventually, to help Adelie find her grandfather in return for her accompanying him to the Registration Centre by public transport. Dandy doesn't like kids, and they don't much like him, in spite of his childlike attitude. He only loses his temper when he's covered in sand... or his car breaks down... or his fried eggs are spoilt. He's not exactly the most appropriate role model for a young girl; he takes her to BooBies, for crying out loud, but he does look after her and the two of them come to truly care about each other. So much so that Dandy gives up the massive capture reward and spends a whole night tracking down Adelie's grandfather.


It's got to be said, Dandy is actually pretty awesome in this one. Not only is so utterly unphased at finding himself in the body of a penguin puppet that he still manages to capture Adelie, the final time it happens (it's a misunderstanding), he's so ninja he manages to keep up with, and almost take down, to vengeful alien hunters.


I Know This Planet, Baby: The planet Humboldt is a pretty remarkable place, equipped with vast, futuristic cities linked by flying trains. The trains glide through the night sky, illuminated by glorious space vistas, and passing through shoals of flying sky fish. (It is for this reason that I choose to believe this is actually the planet Ember from the Doctor Who episode A Christmas Carol, but many centuries after its steampunk period.) It is also home to mighty sandworms that spout huge plumes of glittering sand.


Don't Quote Me, Baby: “That's the power of boobies, baby; even singing about them makes miracles happen.”

The Bottom Line, Baby: Incredibly sweet. This is the first episode that really pulls at the heartstrings, and hints at the hidden depths to Dandy's character. Very well hidden, it has to be said. This is essentially a sci-fi version of Paper Moon, with Adelie very clearly named after Addie in the 1973 movie (or the original 1971 novel), albeit with a very different ending. There's a slightly unpleasant undertone with Dandy encouraging Adelie to come find him once she's gotten older and grown boobs, but for the most part the relationship between them is very sweetly portrayed.
What's with the penguins though? A gentoo is a penguin, an Adelie is a penguin, the puppet Adelie zaps people into is a penguin. It's a poor episode for supporting regulars, with very little for either Meow or QT and nothing for Dr. Gel or the Narrator. Nonetheless, this is one of the most enjoyable and affecting episodes of the series, with beautiful music and artwork.