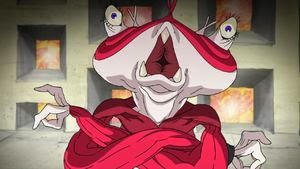 Season One, Episode Six - The War of the Undies and Vests, Baby

Dandy and co. are drawn into a eternal war on the planet Eden.

We're Alien Hunters, Baby: Eden is home to two related alien races, the Undies/Undians and the Vestians, both unregistered. They're not very pretty, and look like they developed from sea creatures. The Undians have crab-like heads, red and white flesh and long, flexible arms, while the Vestians are purplish-blue, with hammerheads and bulbous forearms. Both species have a chest cavity in which they can store weapons. The biggest difference between the races is their polarised cultural mores. While the Undians cover only their nether regions and consider it obscene to go bottomless, the Vestians let it all hang loose and think the topless Undians are disgusting. They've been warring over this intractable schism for the last ten thousand years. The Undie and the Vestie we meet in this episode are the last of their kind, and by the time the episode is over, they're extinct.


I Know This Planet, Baby: Eden was a real garden spot ten millennia ago, but blown to smithereens in the war between the two factions. Now little more than a debris field with a single moon, it is still a war zone. Each survivor has made a base on a fragment of the planet, and are fighting over the dominance of the moon, protected by automated missile systems. The moon also erupts with dangerous geysers.

He's Dandy, Baby: Dandy spends much of this episode making wild claims that he was a surfer ace before he became an alien hunter. QT and Meow are pretty taken in, before he reveals that he pulled the whole thing out of his ass. That said, when the desperate space surf to safety happens at the climax of the episode, he holds his own. Captured by the sole surviving Undian, he happily parades around in his tight underpants and rapidly takes against his former friend Meow, on the opposing side. He reads Playbay (sic).

He's Not a Space Cat, Baby: Meow is recruited by the suriving Vestian, due to his dressing in nothing but a loose top (although he thought it was some kind of sarong). While he is just as easily radicalised as Dandy, even he can agree that getting the two aliens to be registered is a good moneymaking idea, and will require them to make peace. Also, there's promise of BooBies at the end of it.

He's Just a Little Obsolete, Baby: QT is revealed to be a very resourceful robot. Not only is he capable of repairing the Aloha Oe after it takes heavy damage in the missile attack, he also proves to be an adept diplomat. Sadly, he takes it all a little too far, and his strict adherence to protocol leads to the Undian and Vestian once again fighting. No better than his crewmates, he is quite willing to leave Meow and Dandy to die in the conflagration until he comes up with an idea to surf to safety. 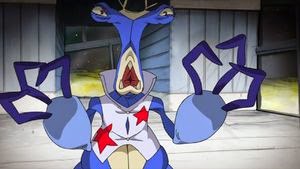 The Bottom Line, Baby: Classic sci-fi, really, a tale of the stupidity of war in the vein of Jonathan Swift, although to my mind, it is reminiscent most of the classic Star Trek episode "Let That Be Your Last Battlefield." The joke wears thin after a while, but it makes its point. The game Spore has an influence on the visual and sound design of this episode, although the English dub makes the aliens sound a little like Yoda. The ending is very Dark Star.

Season One, Episode Seven - A Race in Space is Dangerous, Baby

Dandy's insecurity in the face of Prince, the Sonic Speedster, leads him to enter into the 82,342nd Magellanic Nebula Grand Prix in his shuttle/limo, the Little Aloha.

He's Dandy, Baby: Dandy is jealous of the topflight racer Prince, and declares himself to have once been one of the greatest space races ever born. They called him the "speed-of-light jack knife," apparently. Meow reminds him he's just claimed to actually be a surfer (a rare example of continuity between episodes). Dandy's tactics for winning the race include grappling irons to hang off faster ships, protonic missiles and hitherto unknown means of fuel. (In spite of warp drive being disallowed, terminal violence is fine.) Considering his complete amateurism, Dandy does very well, spending a lot of time ahead of or holding with Prince, who realises he is hopelessly in love with Aloha pilot.

He's Just a Little Obsolete, Baby: Dandy may not have heard of Prince before today, but QT certainly has; in fact, it looks like he might be a bit of a fan. Where Dandy has QT, Prince has Z, a more sophisticated mechanoid who considers QT a hopeless antique. In spite of QT's unwavering support, Dandy once again throws him out the airlock to help achieve his goals.

He's Not a Space Cat, Baby: Meow's opposite number is Squeak, Prince's horrible rat companion who appears to be a backstabbing, litigious parody of Mickey Mouse (quite a nasty stab at Disney there). Meow is a hopeless mechanic, and in desperation dumps everything to hand into the fuel tank on Dandy's pit stop. The resulting explosion of speed sends the Little Aloha beyond the "sixth space velocity," and to speeds hitherto unknown.

Let's Get Our Asses to BooBies, Baby: Honey and the BooBies girls all love Prince. Displaying surprising bravado, Honey enters the race too, in a cute pink spaceship, but still has time to check in on Dandy.

We're Alien Hunters, Baby: The trio don't get up to any actual alien hunting in this episode, but there are aliens aplenty. The host of the Grand Prix is an animate flower creature, who holds, for some reason, a pair of maracas. Other contestants include the sinister Masked Racer; the Twins, two monstrous cyborgs; Crusher Girl, a blue-skinned beauty in a stilleto starship (who appears to be a Twi'Lek from Star Wars); and many more. One of the obstacles on the course is a planet whose angry purple aboriginals don't take kindly to people racing ships through their skies, while the sixth gate is guarded by a gigantic kraken. One of the girls swooning over Prince looks like the Flatwoods Monster.

There's Bad Guys Too, Baby: After two episodes' absence, Dr. Gel and Bea reappear on the trail of Dandy. Entering race space to catch him, Gel finds himself caught up in the thrill of the Grand Prix. He would have caught Dandy this time, had he not forgotten he wasn't supposed to overtake him.

It's Future History, Baby: Even if they have something like ten every year, the fact that this is the 82,342nd Grand Prix means this must be a long way into the future. Having passed the speed of thought, Dandy falls out of time and awakens on an arid planet 5.67 billion years further into the future, where he finds a giant golden statue of himself. 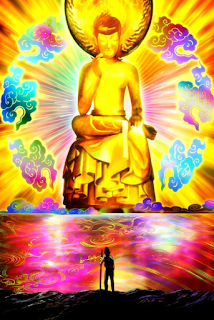 Don't Quote Me, Baby: Dandy and Prince's insults are pretty mild in the English dub, but the subtitled translation of Dandy's venom towards Prince includes the colourful invective "Eat shit, you cockroach bastard!" Ah, those cheeky Japanese.

The Bottom Line, Baby: A straightforward episode, but a significant one. This is packed with more references than almost any other episode (save the season two opener, "I Can't Be the Only One, Baby"). There are any number of space racers, but this is primarily a take on the anime movie Redline, which even has a major character who looks just like Dandy. It also has a lot in common with another Studio Bones production, Star Driver. Along with all that, it manages to take shots at Star Wars, Disney, Galaga (naturally), Wacky Racers (of course) and even the Australian novel and film The Quiet Earth (although the final scene equally evokes the brief far future scenes of the original novel of The Time Machine), and, I am informed, a very specific nod to the end of the manga Dark Myth. Dandy's far future destiny, transcending the boundaries of time, is the first concrete evidence we have to his special place in the Multiverse.