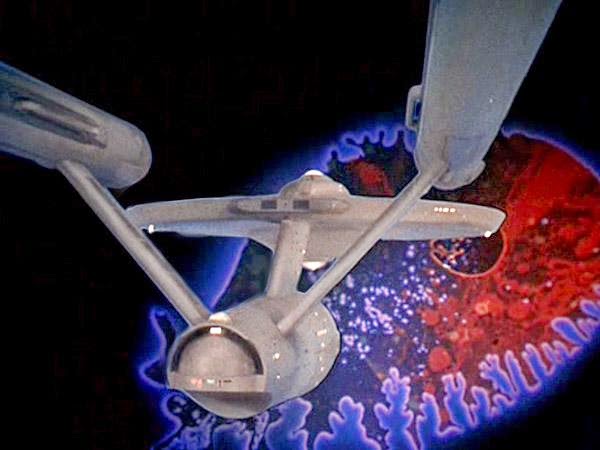 2.18) The Immunity Syndrome
or
Captain Kirk vs. the Space Amoeba

The Mission: Investigate the loss of communications with the starship Intrepid and solar system Gamma 7a.

Space Phenomena: The Enterprise encounters a zone of darkness, a sort of hole in space, a black spot that is not solid, liquid or gas, nor a dust cloud or nebula. It's a region composed of some kind of energy entirely anthithetical to the energy that exists in ordinary life. The Enterprise launches a telemetry probe, which is blasted with noise before ceasing to function. Even at 100,000 km, the zone starts to drain the crew's energy, first making them inordinately tired before causing the more susceptible members to slip into comas. When the ship is swalloed up, all the stars vanish from view. Within the zone, all actions by the ship operate in reverse; to try to reverse away, the Enterprise has to thrust forward.

The Space Amoeba: At the centre of the zone is the creature, a gigantic single-celled organism comprised of protoplasm, 11,000 by 3000 miles across. It's a huge, red, gelatinous blob, constantly shifting in form. Emitting a field of negative energy, it drains the life force of everything in its vicinity, including the crew of the Intrepid and the billions of inhabitants of system Gamma 7a. What's worse, it's preparing to reproduce by fission.

Vulcans: The Intrepid is manned solely by Vulcans (so mixed species crews are probably quite unusual in this period). Since the physics of the dark zone operated contrary to logic, the Vulcans were unable to conceive of what was happening to them, and were wholly unprepared to escape. According to Spock, Vulcan memory goes centuries and cannot recall a conqueror.

Captain James T: He sounds absolutely knackered even before all this crap starts. We never find out what mission they've just come from, but it was clearly exhausting. Kirk's looking forward to a nice bit of R&R at Starbase 6. The Starbase instead sends him on this mission, and he's not exactly happy about it. When it comes to investigating the creature, Kirk of course insists he go in, even though he is the least qualified. He's pretty unfair to Spock, bitching when he doesn't have sufficient data to tell him exactly what's going on. He'd be completely lost without him. He's torn up over the decision to send one of his closest friends to their likely death. It's Kirk who eventually conceives of killing the alien using antimatter.

Green-Blooded Hobgoblin: Spock feels the death of the crew of the Intrepid, a psychic episode in which he is overwhelmed by the death of four hundred Vulcans. He's hugely critical of human attitudes to death compared to Vulcans'. Both Spock and Bones volunteer to investigate the amoeba; Spock wins out in the end because of his physiological and emotional strengths. Plus, he has a personal stake, after dealing with the deaths of all those Vulcans. He's ready to sacrifice himself, but in his determination finds a way for the Enterprise to destory it. When he thinks he's going to die, he makes a log leaving everything to the crew.

The Real McCoy: Bones has the medical knowledge to explore the alien, and he's dying to explore this unknown creature. He considers it the greatest experiment ever. He hypothesises that humanity's purpose in the universe is to act as antibodies against these alien infections. There's a ridiculous rivalry between Bones and Spock, but at the end of the day, they have great respect for each other. Spock thinks McCoy has a martyr complex, however.

Space Bilge: Space Amoeba Drinking Game: take a shot every time a character says “penetrate.” This can also be played with most Next Generation episodes. (Yes, we're puerile.)

The Verdict: A classic science fiction story, with a great, tense build up. We don't see the monster until twenty minutes into the episode. The effects for the alien are amazing, especially in the original version. It's also a great episode for the central team of Kirk, Spock and McCoy, their individual strengths and weaknesses coming together to save the ship.


2.19) A Private Little War
or
Captain Kirk vs. the Viet Nam Allegory

The Mission: Conduct a scientific survey on a planet with a pre-warp civilisation.

Planets visited: Neural (the odd name comes from the script and isn't mentioned onscreen): a class-M planet, described by Kirk as "like Eden." Semi-officially, it's found in the Zeta Bootis system.

Captain James T: Visited the planet thirteen years earlier as a young lieutenant (with the Farragut?) on a planetary survey mission. He befriended and lived with the leader of the Hill People, Tyree. They became blood brothers. Only Tyree knows that Kirk is from another world, which actually means that he was breaching the Prime Directive even back then. Kirk breaks the non-interference order so that he can, in his view, restore the balance on the planet.  His, deeply questionable, solution is to arm the Hill People with the same weaponry as the villagers, and convince them to fight. Tyree doesn't take up arms until his wife is killed by the villagers.

Kirk's sophisticated tactics for stealth warfare include chucking rocks at people. He's attacked by a mugatu and is completely incapable of defending himself, suffering a potentially deadly bite, but later on acquits himself against the beast's mate. 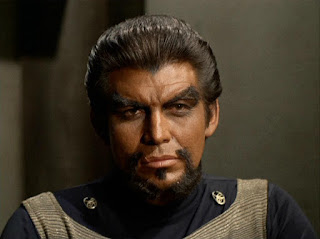 Green-Blooded Hobgoblin: Spock is shot on the planet, but he's hard as nails and tells Kirk to leave him behind (and he said McCoy had a martyr complex). He's beamed back to the Enterprise, where he puts himself into a healing trance in order to recover. He needs to be smacked violently round the face to achieve full consciousness. His heart is where a human's liver would be (there's no information on where his liver is).

The Real McCoy: Considers the planet to be "a medical treasure house." He's surprisingly open-minded concerning Nona's witch-doctory ways for curing Kirk of the poison. He's careless enough to use his phaser to heat up some rocks when Nona is watching, giving her the idea to steal one and take it to the Village People.

Crew Roster: We meet Dr M'Benga, a specialist in Vulcan physiology. Good to have someone of African descent in a major ship role, instead of just answering the phone.

Neural natives: Previously a peaceful people, they've recently entered a state of war. They look completely human, and are divided into two cultures: the Hill People and Village People (it is impossible for anyone nowadays not to snigger at this). The Hill folk have terrible blond wigs, while the villagers have terrible brown wigs. Since they've got their hands on weapons, the villagers have turned into a nasty bunch of vicious rapists, and their leader, Nutella (I think that was his name), thoroughly enjoys murdering people.

Tyree leads the Hill People, and his wife, Nona, is their kahn-ut-tu, a sort of witch doctor. She's a scheming bitch, using her "spells" - various potent plant juices - to turn men to her will. When a woman heals a man with her blood, they are "joined by the soul" and he owes her allegiance. 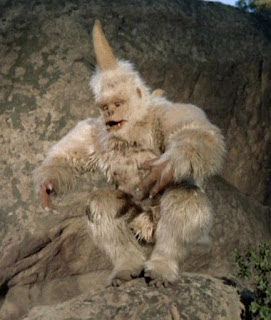 Klingons: The Klingons have sent a ship to Neural to disrupt the natural balance, by arming the villagers with flintlock pistols, pushing their technological development ahead by about 1200 years. This is supposedly similar to the "brush wars" of the twentieth century; presumably the planet's medical potential make it strategically valuable. The Klingon who's still planetside promises to make Nutella a governor in the Klingon Empire.

Mugatu: A huge, hairy beast, resembling a yeti with snow-white fur and one huge horn topping its head. Mugatu always travel as a mated pair, and they have a venomous bite which is potentially fatal.

Mahko root: A grotty root used by Nona in her healing, it wriggles in her hand like it's a worm.

Music of the Stars: Every time Nona appears, the shimmery sexy music from "The Cage" plays. The classic bombastic fight music gets an outing too.

The Verdict: Aside from the odd bit of awful dialogue ("My huge, angry man!"), this works pretty well as a straightforward adventure. Keeping Kirk and McCoy cut off from the ship due to the need to maintain radio silence while the Klingons are in orbit works well to make the events planetside more dangerous. How well it works as a Viet Nam/brush wars allegory is questionable, and since the Klingons aren't even meant to be in the this area of space, you've got to wonder why this doesn't lead to actual war. It's clear why the Klingons only give the natives basic weaponry - they don't want an uprising of angry aborigines with phasers - but Kirk's response is bizarre. A much more logical plan would be to drive the Klingons away and destroy the guns, not give the same to the other side. The Hill and Village civilisations have only about twenty people aside. They'll all be dead within the fortnight.
Posted by Daniel Tessier at 14:01