CONTAINS BIG SPOILERS, if anyone really cares about that anymore. 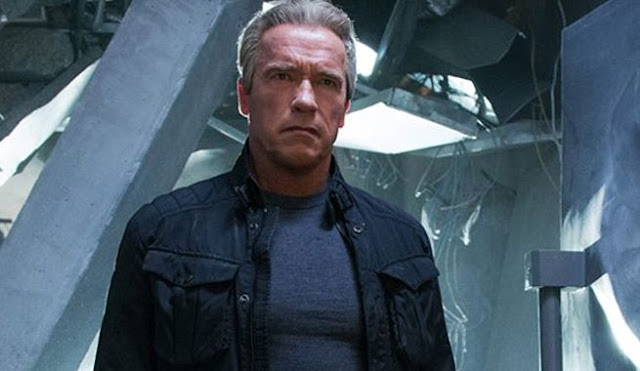 Firstly, I have to say that I am vehemently opposed to the spelling "Genisys." From this point on, the film will simply be known as T5. Seriously, I flinch every time I see it, so I can't bring myself to keep typing it.

With that out of the way, I can say that I actually rather enjoyed T5.

As a film, it is guilty of everything the critics accuse it of. It is little more than a string of set pieces designed to ape the successful elements of its well-regarded predecessors, The Terminator and T2: Judgment Day. It's essentially a Terminator greatest hits album, slavishly recreating certain pivotal scenes from the 1984 original, which makes for a surreal experience, Later in the movie, as events move on from the 1984 setting, fondly remembered scenes are paid homage to so heavily that they might as well be recreations. But, you know, this is time travel. We can be forgiven taking the chance to revisit the past.

It's an approach much like that used by Jurassic World just a short time ago. Both riff on past glories, updated with glossier effects for a modern audience. Closer, though, is the Star Trek reboot of 2009, which took advantage of the time travel elements of the originals to jettison any element the film makers didn't want while retaining those that they knew would entertain both old fans and new viewers. All the while maintaining the originals as a parallel storyline; not overwritten, merely shunted aside into a file marked "Version One."  The challenge for both the Jurassic Park and Terminator franchises is to use this renewed interest to take the films forward and try something new, and not fall into the trap Star Trek did with its disappointing follow-up, Star Trek Into Darkness.

T5 ticks a lot of boxes for fans of the originals. (Both T3: Rise of the Machines and Terminator Salvation are essentially overwritten and ignored, but that's time travel for you. It's not like anyone's really going to miss them.) The film opens in the future war of man vs. machine, on the eve of the decisive battle in 2029, and lets us finally see the time machine that has caused so much trouble throughout the series. We see the iconic moment when the original T-800-101 is sent back to 1984, and when Kyle Reese follows after him. After that, events are disrupted, and we arrive in an altered 1984, where familiar occurrences play out differently than we, or Reese, expect them too. It's effective, although the significance will no doubt be lost on most younger viewers who may be coming to the Terminator franchise for the first time.

Following the second film, successive sequels (including the TV spin-off, The Sarah Connor Chronicles, or "the Connicles" as we prefer to call them) faced the problem of having to push back the date of Judgment Day as real life overtook it. Equally, in the years since the original, Microsoft and Apple have become so ubiquitous that Skynet's attempts at world domination look half-cocked. Time travel has left the continuity in a woeful shape, but T5 makes a virtue of this, using it as a springboard to play merry hell with established events, and then move on to a new near-future, with Judgment Day pushed back twenty years to 2017. Skynet's emergence is identified with the immersive technological culture of today, with a new operating system named Genisys (shudder) being merely the embryonic form of the malevolent AI. The storyline, which involves multiple Terminators travelling to multiple points in time, while the timelines overlap, also answers one of the two major niggling questions of the franchise: why don't the machines just keep sending Terminators back until they're successful in altering the past? (The other being, why do they have robots driving trucks, instead of, you know, robot trucks?)

The only concrete link with the originals is Arnie himself. I'll come out and say it: Arnie is too old to play the Terminator now. Again, though, T5 makes a virtue of what could have dragged it down, transforming the Terminator, or Guardian as he's also called here, into a parental figure for Sarah Connor. Reasonably suggesting that the living tissue of a T-800 would age like normal flesh, and that they were never intended to be in action for forty-odd years, it makes sense that the creaky old Pops is still protecting Sarah, regardless of grey hair, wrinkles and corroded joints. Arnie's performance is the heart of the film; he has good chemistry with Emilia Clarke and brings humour to scenes that would otherwise become dour. T5 is a film that doesn't take itself to seriously, and neither does its star. Those who complain that this dilutes the memory of his original performance as the eponymous killing machine of The Terminator are forgetting that he has been a heroic figure in the franchise more often, and for far longer, than he was a villain. Although he is unusually verbose here, exposition seemingly being an extra feature of this model.

A highlight is the Guardian's confrontation with the original Terminator, sent back to kill Sarah in the first film, recreated with astonishing realism by a combination of a stand-in actor, photo-compositing from images of Schwarzeneggar from the '80s, and de-aging techniques on the actor's contemporary face to create a synthespian. It's absolutely remarkable, banishing memories of dodgy de-aging of actors in X-Men and Tron sequels. In fact, I think it's probably more likely that the movie technicians built a working time machine and used it to film extra footage of Arnie in 1984.

As Sarah and Kyle, Emilia Clarke and Jai Courtney will forever be compared to Linda Hamilton and Michael Biehn. Clarke comes off very well indeed, combining the likeable, vulnerable Sarah of the first film and the guntoting hardnut of the second into a more rounded, believable character. Courtney, on the other hand, lacks the charisma of Biehn, or even Anton Yelchin's Terminator Salvation version, and I found he made little impression. Crucially, he and Clarke lack much in the way of on-screen chemistry, and this lets the film down in an essential area.

In fact, Courtney has better chemistry with the other Clarke, Jason, who plays the legendary resistance fighter John Connor. In a spectacular twist, John is transformed by Skynet into a new, T-3000 model Terminator, a cyborg construct of nanorobotic cells. At least, this would have been a spectacular twist had the fim's marketing bods decided not to blow it in the trailers. Still, it works, with Clarke's powerful but oily version of John making for an effective antagonist. Less effective, if only for his severely curtailed screentime, is Matt Smith. It's deeply odd to see him here, donning an American accent (that's two Australians, two English folk and an Austrian so far), but I'm certain that given strong material, he could excel as Mr Clever Skynet. After a brief appearance as the T-5000, the physical embodiment of Skynet (and seemingly imbued with Borg-like abilities, assimilating John into the ranks), he has a few minutes as a holographic avatar, and he has to share that. Naturally, Skynet survives after all, and with Smith signed up for a further two films, hopefully we'll get to see rather more from him in future. (I really never expected to see an actor play both the Doctor and the Terminator.)

Also signed up for further sequels are Arnie himself and the wonderful J.K. Simmons, who has a memorable role as a robot-obsessed police officer, and is an absolute highlight of the film. With a new timeline to explore, the filmmakers have no excuse not to try something new with the franchise. T5 is highly enjoyable if approached as intended: a nostalgic bit of fluff riding on fond memories and dazzling effects. The Terminator is no longer the unstoppable force of the past; as with the Alien, where one was once a terrifying, seemingly indestructible threat, nowadays a phalanx of them fails to make the same impression. The greasy, cold physicality of The Terminator was lost in favour of CGI spectacle as far back as Judgment Day, with diminishing returns ever since. While this is a fun, exciting actioner, it has nowhere near the impact of the films it imitates. See it, enjoy it, then go home and stick on the original. All the best things came out in 1984, anyway.
Posted by Daniel Tessier at 23:10