While Marvel are doing great things on the big screen (we can forgive them for Fantastic Four, that was Fox's doing), it's DC that are making the most of television. While we're getting bits and pieces of news regarding Marvel's network and Netflix series, there's been a flood of info regarding new characters in the DC-based series on CBS, Fox and the CW. Explicitly, Arrow, Flash, Legends of Tomorrow and Vixen are set in the same world, while a crossover with Supergirl has been ruled out. Gotham, being essentially unrelated and on a different network group entirely, is not going to cross over any time soon, so at some point we're probably going to get different versions of the same characters appearing in each universe. There's enough new info that I had to break it up somehow, so here are the good guys beign introduced in Arrow season four, The Flash season two, Gotham season two, and the first series of Legends of Tomorrow, Vixen and Supergirl. Constantine's been cancelled.

The first character known as Kid Flash, and the third to become the Flash, Wally West is a boy who receives the powers of the speedsters in a replication of the accident that granted them to Barry Allen. He first appeared, as Kid Flash, in 1959, became a major member of the Teen Titans, and became the Flash in 1986, following Barry's death in the Crisis on Infinite Earths. Prior to this, Barry acts as his mentor and idol, although with Barry being somewhat younger in the TV series than in most interpretations, this might be a little different. In the comics, Wally is the nephew of Iris West, but considering that there has been no indication of Iris having any brothers or sisters in the series, and again considering the similarities in ages, this will most likely be tweaked (I suspect he'll become a cousin). The original version of Wally was white, just like all the other Flashes; the version recently introduced in the New 52 shake-up is mixed race, white on Iris's side of the family. Considering the ethnicity of Iris actress Candice Patton and Jess Martin, who plays her father Joe, it's no surprise that an actor of colour has been cast as Wally. There's bound to be someone kicking off about this somewhere. Keiynan Lonsdale is a pretty new actor, but has been seen on the big screen in Divergant.

And another Flash! Jay Garrick is the original Flash from the Golden Age of comics, who debuted way back in 1940 in Flash Comics #1. In the last moments of the season one Flash finale, Garrick's trademark hardhat tmbled out of the wormhole that was soon to threaten the world, cliffhanger fashion. The first Flash met the second in the 1961 storyline "Flash of Two Worlds." which established that the Silver Age and Golden Age heroes existed in parallel worlds (Earth-One and Earth-Two, respectively). Barry Allen lived in Central City, while Garrick inhabited its Earth-Two equivalent, Keystone City. Eventually, both versions of Earth were combined, with Central and Keystone becoming sister cities (this seems to be the case on the TV series, since Eddie Thawn transferred from Keystone to Central City).

The showrunners have released promotional artwork based on the cover of the classic comic that featured "Flash of Two Worlds." so it's safe to say that Earth-Two will be introduced in the new season. This story originated the Multiverse in DC comics, a concept which caught on throughout the medium. We could be seeing all sorts of parallel versions of characters cropping up after this. Teddy Sears is best known for roles in the drama series Raising the Bar and Masters of Sex. This is the second time the character of Jay Garrick has appeared in live action; he was played by Billy Mitchell in an episode of Smallville.

A member of the temporal agents known as the Time Masters, Rip Hunter is the holder of the most unnecessarily butch name in comics. So far on TV, we've had a brief mention of him by the villainous Eobard Thawne in the Flash finale, and the trailer for Legends of Tomorrow, in which it looks like he is partly responsible for getting the various characters to form their superhero team. An often manipulative character, Hunter acts to protect the timelines. Considering that, due to the aforementioned Multiverse, there are multiple versions of him travelling through time, this cna get complicated. His father is later revealed to be the time travelling hero Booster Gold, although this character is apparently off limits for the TV productions (there are hints he's being reserved for future cinematic treatment). The TV version of Rip Hunter is played by Arthur Darvill, best known worldwide as Rory Williams, companion to Matt Smith's Doctor Who. However, judging by the trailer, he'll be playing him more like David Tennant's incarnation.

Mari McCabe is a young African woman who inherits a magical totem from her father, that had been passed down her family over the centuries. Originally given to the legendary hero Tantu by the Spider God Anansi, the totem gives Mari the abilities of various animals. She moves to America and becomes a model, because she's fricking hot. She also, along with Barry Allen, becomes a member of the Justice League.

Starting in a couple of weeks, the CW will begin streaming an animated Vixen series on their website. This is part of the main Arrowverse, with Grant Gustin and Steve Ammell making voice appearances as the Flash and Arrow respectively. Echikunwoke will probably turn up in at least one of the lvie actions series at some point. Vixen has never previously appeared in a live action series, but Gina Torres voiced her in numerous episodes of the animated series Justice League Unlimited.

I'll be honest, I don't know much abotu Hawkman, and what I do know confuses the hell out of me. Some times he's a man named Carter Hall, sometimes he's an alien named Katar Hol. It involves numerous reboots of DC's continuity, plus various deaths and reincarnations. This guy has suffered from retcons severely over the years. In the TV version, at least, he's a gent named Carter Hall, who is a reincarnation on an Egyptian prince, who is searching for the reincarnation of his soulmate (see below). He's expected to first appear in The Flash before crossing over to its sister series. Falk Hentschel is a German dancer and actor, who has, among other things, previously appeared in Marvel's Agents of SHIELD as Marco Scarlotti, aka Blacklash. Michael Shanks previously played a version of Hawkman on Smallville, and various iterations of the character have appeared in animated series over the years.

Kendra is the latest reincarnation of an ancient warrior, and Hawkman's aforementioned solumate. Described in press releases as "a young woman who is just beginning to elarn she ahs been repeatedly reincarnated over the centuries. When provoked, her ancient warrior persona manifests itself, with wings that grow out of her back." While the trailer pegs her as "a girl with wings and a past lives complex." She can totes fly. There's clearly going to be a much heavier focus on mystical characters than in previous seasons in the Arrowverse. Ciara Renee has previously been a theatre actor, and made an appearance, very briefly, as Kendra in the finale of The Flash. The character was played by Sahar Biniaz on Smallville and voiced by Maria Canals Barrera in both Justice League and Justice League Unlimited. 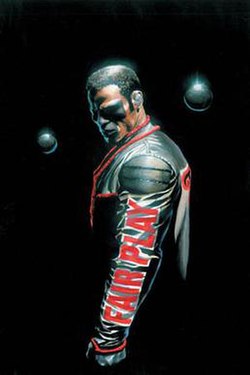 Named for the comicbook character Michael Holt, Curtis Holt is the Arrowverse iteration of Mister Terrific. In fact the second man to take that name in the DC universe, Michael Holt modelled himself after the original, Terry Sloane, who appeared in Sensation Comics. A childhood prodigy and an adult genius, Holt is described as the most intelligent memeber of the Justice Society of America. As well as being physically formidable, Holt is invisible to technology and has created devices called T-spheres, which perform a variety of functions. His strict scientific outlook and atheism has often left him at odds with Hawkman and other supernatural characters, so it's interesting how Curtis Holt will interact with the various characters in Arrow. Echo Kellum has previously been seen in various American sitcoms that I have never heard of.

A long-time supporting character in the Flash comics, Patty was Barry's lab partner and sometime love interest. The New 52 continuity actually has them in a relationship, so expect there to be some love triangle stuff going on between Barry, Iris and Patty. Some versions of continuity and Elseworlds-type stories have given her speedster powers too, calling her Ms. Flash or Hot Pursuit. In the series she is set to be Joe West's new partner, replacing the lost Eddie Thawne, so this could set up quite an interesting dynamic. Shantel VanSanten has mostly been in teen dramas and horrors including One Tree Hill, The Final Destination and the lead role in Something Wicked, but now she's thirty she probably has to start playing grown-ups. 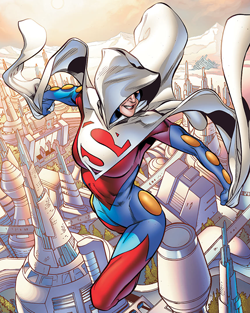 The younger sister of Lois Lane, introducing Lucy into Supergirl makes the links to Superman even stronger. Like several of the characters on this list, she goes right back to the beginnings of the Silver Age, and has been in and out of comics ever since. She's often been romantically paired with Jimmy Olsen, and is his ex-girlfriend in the new series, so we can expect more love triangle stuff between the two of them and Kara. As with many of the characters in this series (including Hank Henshaw=Cyborg Superman, Winn Schott=Toyman, etc) Lucy has the potential to become a superpowered character in the future. In the comics she was one of several characters over the years to become known as Superwoman, in her case due to a containment suit that granted her Kryptonian attributes. A dancer by training, Jenna Dewan-Tatum has lately been in dramas such as American Horror Story. Her husband is Channing Tatum, who will soon be Gambit for Fox. Luc Lane was previously played by Peyton List in Smallville, and by cutie Maureen Teefy in the classic 1984 Supergirl movie.

A long-time love interest for Bruce Wayne in the comics, Silver St. Cloud even worked out that he was Batman. Of course, in Gotham we're catching both characters at a much younger age, but I think we'll be seeing a pre-teen romance going on here. Natalie Alyn Lind already has a fair bit of acting experience, having appeared in various series including One Tree Hill, Criminal Minds and The Wizards of Waverley Place. To the bes tof my knowledge this will be the character's first live action appearance.

Bit of a cheat - this isn't new casting at all. However, the Arrow showrunners have confirmed that Matt Ryan will be returning to the role of Constantine following the cancellation of his own series after one season (which is a blow, because that became rather excellent by the end). He is set to appear in a season four episode entitled "Haunted." Presumably, this means the broadcast series of Constantine is part of the Arrowverse, although it could just be a case of cribbing the best actors like new Flash did with nineties Flash. Given the new focus on magical and mystical elements in the various series, we might see further appearances by Constantine down the line.

Updates will be appended as they're announced. Supergirl is also set to include the hero Red Tornado, as yet uncast.