There are a lot of Sherlock Holmes pastiches out there, with more published every year. In any such popular and busy crowd, it's hard to stand out. Titan's Further Adventures of Sherlock Holmes range itself is already coming up to twenty titles. A new book has to be pretty special to stand out amongst all the Sherlockery. 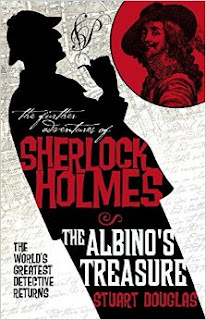 The Albino's Treasure, though, does stand out, as both an spot-on pastiche and a rollicking good read. The first full-length novel by Stuart Douglas, it's his second published Holmes story after he contributed to the publisher's 2013 collection Encounters of Sherlock Holmes. (Once more, full disclosure: Stuart Douglas is the head honcho at Obverse Books, which means he was my publisher for Iris Wildthyme of Mars.) It's a tough balance to hit when writing a Holmes book in the Doyle style, as narrated by John Watson. There's a distinct recipe to this type of story, which when made correctly, achieves the flavour of a Doyle original while still offering something new and contemporary. It's not easy, but Douglas gets it right. His Holmes is acerbic, witty and impatient, but with compassion there for those willing to see it, while his Watson is intelligent but all to quick to react, and easily charmed by the fairer sex. Lestrade walks the fine line between the dunce that Holmes sees him as and the competent officer he ought to be.


The Further Adventures series is a favourite of genre buffs and fans of the period for its habit of taking characters of various origins and implanting them into Holmes's world. The Albino's Treasure wears its influences on its cover. If you can't guess who the mysterious Albino is, well, maybe take a quick look at some of Obverse Books' earlier publications. However, the pale-skinned villain is not the only famous opponent Holmes and Watson must face. The Lord of Strange Deaths is also pulling strings, and his true name is as famous as they come. The novel's climax is a thrilling meeting of some of fin de siècle pulp's most notorious characters.

The story begins as an investigation into anarchic organisations on the fringes of London society, before developing into a mystery involving art history, political machinations and secrets that have lain buried for centuries. There's a good balance between the more intellectual challenges and the brilliantly portrayed action scenes, and it maintains an easily readable pace throughout. It also has some very funny moments; my favourite line coming early on in Watson's narrative: “I am as fond of art as the next man, but only as I have found that the next man, generally, is not terribly fond of it either.” Altogether, a very enjoyable tale for the Great Detective.