Quite a few interesting bits of palaeontological news have crept out during the last couple of months, and since I haven't done a palaeo post for a while, let's have a look.

Spinosaurus aegyptiacus is one of those dinosaurs that has had major revisions in its reconstruction since it was first unearthed in 1912. As with most large dinosaurs, remains of Spinosaurus tend to be very incomplete, so the species has been reconstructed using elements from related genera, gradually being refined as more Spinosaurus remains are discovered. (The type fossil getting destroyed in WWII bombings didn't help much either.) Over the years, the largest theropod has been re-envisaged as a crocodile-like predator that ate mostly fish, comfortably walked on all fours and lived a semiaquatic lifestyle, although this was style pretty hypothetical.

However, recently unearthed fossils show the Spinosaurus tail for the first time, and this shows not the slender, tapering tale known from most theropods but a great big fish-tail. The tail bones show a deep, paddle-like appendage, like that of an eel or newt. As Samir Ziouhri, who heads a team at Casablanca's Hassan II university says, "This tail is unambiguous. This dinosaur was swimming." The full Nature article goes into a little more depth, but this is a major breakthrough in our understanding of dinosaurs, and continues to illustrate just how diverse non-avian theropods were.

Something I hadn't realised at all until I saw an Instagram post the other day by palaeontologist Emily Keeble (Deinonychusfloof) is that the huge and rather popular dromaeosaurid Dakotaraptor steini is a chimaera. To explain: in palaeo terms, a chimaera is a fossil that's actually cobbled together from a mix of animals' remains. Sometimes they're deliberate fakes, but usually they're happenstance combinations of remains. It appears that part of the holotype fossil for D. steini is actually from a turtle, which throws the whole analysis of the species into question.

Dakotaraptor has been described as one of the last of the dromaeosaurid dinosaurs, living at the very end of the Cretaceous in the same ecosystem as Triceratops and T. rex. It's also one of the largest, coming close to the biggest of the dromaeosauridae, Utahraptor and Achillobator. It's been tricky to pin down its exact relationship to other dromaeosaurids though, and this could explain why. It's already been suggested it's actually synonymous with Acheroraptor, which was named slightly earlier, so it's possible Dakotaraptor will be scrapped as a valid genus in any case. 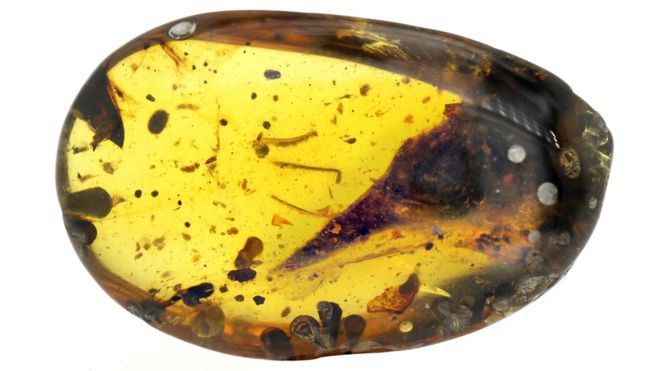 This one was a snappy news story: the tiniest ever dinosaur outside of Aves, the true birds. Oculudentavis khaungraae was found as a complete skull, only half an inch in length, preserved in Burmese amber. Initially it was described as a basal avialan, which is to say, a bird in the broadest sense (how exactly to define a bird is a tricky question), only slightly more advanced than Archaeopteryx (which I still consider closer to the dromaeosauridae than avialae in any case). If it was a bird-like dinosaur, it would have been about the size of a bee hummingbird, which is the smallest bird, and therefore smallest dinosaur, known.

However, as soon as the description was published, a number of palaeontologists pointed out that the odd mix of primitive and advanced features didn't so much look like an unusual bird but a lizard-like reptile, throwing the whole thing into question. A lot of living and extinct lizards have evolved bird-like skulls, and Oculudentavis seems to lack some of the features that define theropods. So sadly, as interesting a find as this is, it's almost certainly not a wee little dinosaur.

Everyone loves a baby animal, even a long dead one, so here's a piece on the European Synchroton Radiation Facility and their X-ray of a dinosaur nest. The sauropodomorph Massospondylus carinatus left a nest of eggs 200 million years ago, and now we can see the tiny little baby dinos. The embryos were about 60% through their development, and appear to develop in much the same way as both modern reptiles and birds.