A Life in Pubs 1) The Caroline of Brunswick

Part one of "Pubs that have had a measurable impact on my life," with thanks to Nick Kent who started this on the Facebook. Ten pubs that have actually, in some way, changed my life, or at the very least, ones I've spent enough time in or enjoyed enough to be worth mentioning. 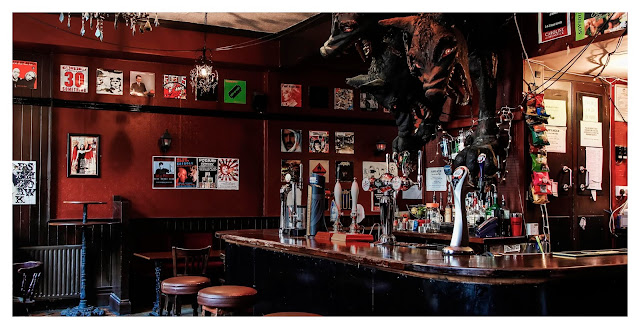 The first such pub has to be the Caroline of Brunswick in Brighton, a pub which has genuinely changed my life.

The Caroline, named for the wife of King George IV, who had a rather ostentatious holiday home built just down the road, is pretty bloody unique. It's a rock pub that with some cool/explicit/deeply strange artwork all over the walls, known for its colourful clientele, loud music and a great upstairs venue that always has some excellent comedy performers. The Caroline was the venue for the long-running sci-fi and nerdage quiz The Geekest Link, where I was part of winning teams many times, including the Star Trek special where we achieved the only full marks in the quiz's history.

More importantly, though, the Caroline is where I met my love Suzanne, both times we met for the first time.

The first first time was at the quiz, when we ended up on a team together due to insufficient tables. We kind of forgot about this though until we both twigged some years later.

The second first time we met, and the important one, was upstairs at the Funmy Comedy Shoe. I went along with a friend who was, at the time, seeing Mr Simon Plotkin, the legendary host of the Shoe, and also in an improv troupe with Suz. We shared a table, talked about Red Dwarf, and that was that.

Well, actually, it was ages before we got together, but that was my fault. I'm slow on the uptake. But I am very good at Star Trek trivia, and I did win the shoe-off that night.
Posted by Daniel Tessier at 21:21