A Life in Pubs 3) The Scaynes Hill Social Club

My old home town is not a large place. Anyone who's not from round these 'ere parts, Scaynes Hill is a bit of housing, some fields and some woods that exists as a growth on Haywards Heath. Isolated fancy houses with their own grounds that are too posh to exist in an actual town exist all around it and are sort of lumped in there with the village. It's right on the edge of West Sussex, and you're pretty much out of it once you cross the border into East Sussex. 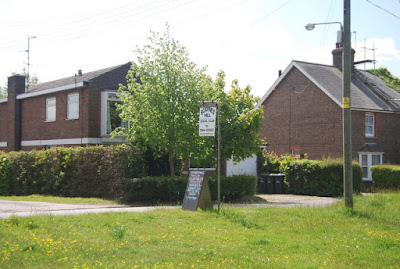 I did a lot of growing up in Scaynes Hill. we moved there when I was twelve, I think, and I was still there well into my twenties. There is not a lot to do in the village and I mostly went out in the nearby towns, but I still spent plenty of time in the village pubs. There are only two pubs in Scaynes Hill, three if you count the Snowdrop which is really beyond the village. Otherwise it's the Farmers (which was pretty nice) and the Sloop (which was very nice but a bit of a walk).

But the main place we'd go for a drink in the village was the Social Club, which was about a hundred yards away from our house across a field, although annoyingly, the farmer who owned it wouldn't lay a nice path down and knock down his fences, so we had to go all the way round, adding a good five minutes onto our walk. Probably ten minutes on the way back.

The Social Club was basically just a big shed, with a bar, a pool room, and a bit of decking. It was, however, cosy, welcoming, and above all, cheap. Every Saturday there was a quiz, which was almost always hosted by my dad, and twice by me. There was some absolutely terrible karaoke, some beery barbecues, and a lot of very nice beer. Every Christmas day there'd be a traditional walk over to the Club for a festive pint. Half the clientele were old-fashioned, country types, with the proper Sussex accent that is now almost extinct; the other half were footballers. Occasionally there'd be a band on, usually Slow Down Mavis (which I was not part of but did name).

The Social Club was quiet, dull and a safe space to learn how to drink more pints of beer than is strictly necessary.
Posted by Daniel Tessier at 18:21

Email ThisBlogThis!Share to TwitterShare to FacebookShare to Pinterest
Labels: A Life in Pubs, Sussex