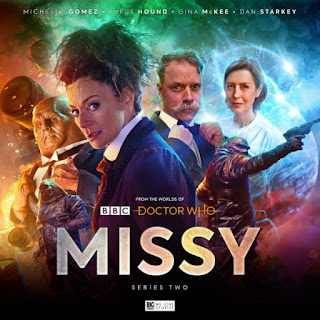 Has there been too much of the Master lately? Big Finish, BBC Books and others have out out a hell of a lot lately, and the fans have too (hey, I've contributed to some of it). Missy's appearance on the TV series seems to have kicked off a fan obsession with the character, with the various iterations and regenerations appearing more often than ever before, with multiple multi-Master events as well. It could easily see the character becoming overused to the point of sickness, but for now, I'm enjoying the extra adventures for the character. (We've even got Eric Roberts back, although I'm way behind on the various releases.)

Of all the incarnations, it's Missy who's the easiest to imagine having her own adventures, as a sort of wicked pseudo-Doctor. I've not picked up the first boxed set from BF, but the second one was recommended to me as having some irresistible ideas. This is true, but the execution isn't quite there.

The real draw of the set, "The Lumiat" sees Missy acting out her most vicious plans in an attempt to get the Doctor to pay her some attention. However, when a mysterious time-travelling woman turns up to fix things, it's not the Doctor at all, but someone calling herself the Lumiat, and she knows an awful lot about Missy and her plans.
The big spoiler: the Lumiat is Missy's next incarnation, having come into existence when Missy utilised a desperate gambit to create a new life cycle when she was left for dead on the Mondasian colony ship in "The Doctor Falls." Sh'es a sort of anti-Valeyard, by her own admission, being all that's good from Missy manifested (incidentally, the way they talk about the Valeyard makes it sound like Missy's got a crush on him). Gina McKee puts in a good performance as the Lumiat, who's just similar enough to Missy to be believable as a future incarnation, but she does inevitably come off as a basic Doctor-clone sometimes too.
To be honest, I'm amazed the Beeb signed off on this. The inference of the story is that the Lumiat is immediately prior to the Dhawan Master, although there's plenty of ambiguity, and there's also a get-out clause regarding the process of her regeneration disconnecting her causally. For now, at least, this is the official story for the Master. The episode itself isn't anything spectacular, but it does cast a fascinating light on Missy (here clearly prior to her appearance in series eight) and how she changes over the course of the programme.

A direct sequel to the first box, with Missy once again involved with two plucky Victorian schoolchildren for whom she had played governess. Of course, I haven't heard this, but the story itself lays everything out so it's very easy to follow. Missy as an evil boarding school headmistress is pretty irresistible, and she's relentlessly entertaining. The kids are fine, I guess, but there's only so much plucky well-spoken enunciation that I can enjoy. Dan Starkie is as fun as always as Strax, posing as "Mr. Strackie," and this episode apparently ties into one of the Paternoster audios. It's a nice tying together of the expanding Victorian era of the spin-offs. On the whole, pretty good fun.

The strongest story of the set, "Treason and Plot" sees Missy stuck in London in 1605 in time for the great Gunpowder Plot, doing her best to unstick history so that the Time Lords will turn up to fix things, allowing her to make her escape. However, a probationary Time Agent named Rita Cooper turns up and does her utmost to keep history on track. It's a great runaround with the plot constantly twisting as Missy tries to divert history and Rita tries to put it back. The least continuity-laden of the episodes, it works better for standing alone. Ony Uhiara is great fun as Rita, and I could easily see her turning up in future audios.

On paper, this is a great idea. The Monk and Missy meeting up (for the second time after a previous adventure in the first set, and again, plenty of exposition here to bring me up to speed), each one trying to pin the Master's former crimes on each other. Rufus Hound is still brilliant as the latest incarnation of the Monk (the third? I'm really not sure) and he could honestly make the transition to the TV series.
Unfortunately, this is also the latest of BF's recent obsession with the Ogrons, the worst possible aliens for lengthy dialogue on audio. Fair play to the actors involved for trying, but extended speeches by people doing painfully slow "I'm...not...thtoopid...I'm...just...an...Ogronnnnn..." voices becomes unbearable after about five minutes. Didn't get anywhere close to finishing this one. A really shoody end to an otherwise pretty entertaining boxed set.
Posted by Daniel Tessier at 19:37