Terry Nation tried to take the Daleks to the United States and develop their own series right back in 1966. It's taken over fifty years but the malicious pepperpots finally have their own TV vehicle - of a sort. As part of the Time Lord Victorious crossover, the BBC YouTube channel has released a five-part animated series for streaming. Apart from the fact that it's the only completely free item of Doctor Who released as part of the initiative (even the TV series technically costs the license fee if you wanted to catch up on that), it's a fun little diversion that's easy to enjoy without reams of foreknowledge.

Still, it does tie into the overall story, albeit peripherally. As yet I've not made too much headway into TLV, but this, as best I can make out from the online guides, leads into the Defender of the Daleks comic story from Titan. The storyline sees the Dalek Emperor and the Dalek Strategist from that series leading a campaign against a deadly, seemingly unstoppable threat from another dimension, named simply "the Entity." We don't see much of this being, or beings, mostly just green light emanating from a dimensional rift, but its forces absolutely wipe the floor with the Daleks. 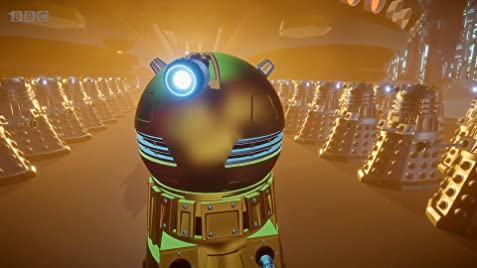 Each episode, only about thirteen minutes long, sees the Daleks take on another race in their attempts at universal domination/survival. "The Archive of Islos" sees the Emperor try to take over a galactic database tended by a race of robots, only to get double-crossed by them when they hand the Daleks over to the Entity. "The Sentinel of the Fifth Galaxy" sees the Strategist travel to an abandoned colony (possibly Spiridon, but probably another planet in the same campaign) to contact the Sentinel, a surprisingly cutesie robot called R-41, to reactivate an army of Daleks for the upcoming war. "Planet of the Mechanoids" sees the Emperor and Strategist desperately turn to their old enemies the Mechanoids, now evolved into something more sophisticated, in an alliance against the Entity. This continues with the two forces double-crossing each other in "The Deadly Ally" and "Day of Reckoning," while trying to battle the Entity as well.

It's simple, straightforward space adventure stuff, with lots of blasting lasers, swarms of robots and nice big explosions. Profound it isn't. But why would it be? This is a kids' cartoon series intended to distract for quarter of an hour a week, and on that level, it works perfectly. Some fans are complaining about the standard of animation, but frankly, for a webcast cartoon about killer robots this is absolutely fine. It's bold, colourful and easy to follow. The voice work is great; Nick Briggs is as good as ever as the Daleks, with his Emperor being particularly impressive. Anjli Mohindra voices the Mechanoid Queen, with Ayesha Antoine as other Mechanoids and the Chief Archivian. Thankfully, the Mechanoid voices are far better than the irritating ones from The Chase - far more human but still recognisably Mechanical. R-41 is voiced by Joe Sugg, who makes the robot likeable but untrustworthy.

While this is intended for young fans on the surface, underneath it's a clear love letter to classic Doctor Who and Dalek stories. Longtime fans will get a buzz from seeing old favourites from the Dalek Chronicles comics such as the Golden Emperor and the Mechanoids realised on screen for the first time in decades, or ever. The links to the rest of TLV is flimsy - the story just seems to be the Daleks getting beaten up by various aliens before turning the tide moments before utter defeat - but in this case I think this is a strength. This is a bit of fun that stands on its own nicely.