WHO REVIEW CATCH-UP: Emperor of the Daleks

The Seventh Doctor comics aren't the greatest era of Doctor Who Magazine's strips, but they definitely improved during the New Adventures period, when Benny Summerfield joined the TARDIS crew in the strips as well as the novel line. The strips collected in this volume appeared in issues 193 from late 1992 to 211 in early '94, plus one special and one strip cribbed from issue 227.

It must have been a bit of a surprise for readers when Benny suddenly popped up in the strip without introduction, but then, the DWM strips always reflected developments in the TV series even when it made little to no sense within the confines of the comic itself. The strip was often at its strongest when there was no series to line up with and it was able to go in its own direction, but the decision to stick with the template of the NAs meant there was a clear direction for Doctor Who at the time (compare to the Eighth Doctor era, when there were three competing media with their own continuities, causing no end of debate but also resulting in easily the best run of strips in the magazine's history).

The first story in the collection is "Pureblood," by the now prolific Dan Abnett, who's written prose and comics for everything from Star Trek to Warhammer. Although completely at odds with The First Sontarans (proposed earlier but produced much later), "Pureblood" proposes a fascinating origin for the Sontarans, showing that their early warrior culture developed into the Sontarans we see today through a reductive process of genetic engineering. Abnett puts this across in an action-packed interstellar war serial, ably realised by Colin Andrew. Abnett''s script makes the Sontarans far more three-dimensional than they'd see in mainstream Doctor Who for decades. I also agree with Abentt's commentary - the Pureblood Sontarans do look like they're related to the Ogrons...

Next up is the one-shot from the 1992 Winter Special, from the normally reliable Scott Gray. It's not great, but to be fair, it was speed-written to fill a gap in the scheduling. A flimsy story that sees the Seventh Doctor and Ace run a holo-program of the First Doctor's time on Gallifrey - back when he was going by "Thete," as per Drax's stylings - there's not much to it. The main talking point is wondering whether the mustachio'd Magnus is really the Master, or the War Chief, or both, but really, it's such a throwaway story it seems hard to care. 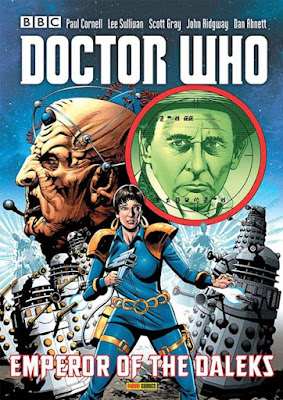 Next up is the big title story, "Emperor of the Daleks!" itself. It's a co-op between the magazine's editor John Freeman and much lauded writer Paul Cornell. Cornell is one of the best writers in the franchise, and at this point had made his name as basically the bet writer on the New Adventures. Plus he created Benny, so you'd expect he'd give us something special with this strip. However, the story is hamstrung by trying to do way to much at once. It's a follow-up and retcon of the previous Dalek strip, "Nemesis of the Daleks," plus a linking story between the last two Dalek TV serials, Revelation and Remembrance of the Daleks. It also provides an unexpected sequel to Planet of the Daleks and introduces Cornell's pet project of setting up a weird semi-antagonistic relationship between the Sixth and Seventh Doctors. As such, it opens with a Sixth Doctor strip that sees him rescue Davros from the Daleks at the end of Revelation, and ends with a follow-up, the rather good "Up Above the Gods!" which sees them conversing in the TARDIS (this one from #227, almost two years later).

The rest of the six-part story is a rollicking adventure yarn with more Daleks than you can shake a stick at, but the insistence of doing yet another Abslom Daak story is really a problem. Frankly I don't think Daak become a usable character until Titan Comics brought him back in 2015, when they were able to appropriately take the piss out of him. For all that he's a pastiche, he's still taken far too seriously in "Emperor" and the dickish machismo of the character drags everyone else down, resulting in some of the worst character dialogue Cornell ever put to paper. It's still better than half of what was in the strips in this period but it's a pity to see Cornell put out something so shallow.

Warwick (later Scott) Gray gives us "Final Genesis," a solid four-parter that sees the Doctor take Benny and "New" Ace to a parallel Earth where the events of Doctor Who and the Silurians turned out rather differently. As Gray points out in his commentary, this clashed with the NA Blood Heat, but since they both involve parallel universes they could both be valid. As such Gray posits the events of The Silurians are a nexus point branching into many realities. This one is the one where the Doctor actually won the day and ushered in a new era of peace between humanity and the reptile people, but it's now in jeopardy. Anyone expecting a two Doctors team-up will be disappointed, as both the alt-Doctor and alt-Brigadier have recently been killed.

It's a decent story, let down by some scruffy artwork by Colin Andrew that doesn't suit the tone at all. The monsters of the story, hybrids of human and Silurian, don't look remotely like either and look pretty rubbish. The writing's solid though, raising interesting questions about the Doctor's motivation in visiting a parallel world.

"Time & Time Again" is a silly but fun one-off. Like the third part of "Emperor," which landed in the 200th issue, this one is in colour to celebrate the series' 30th anniversary, and like the earlier one, it's looks like it's by someone who's not used to working in colour. It's a daft story which sees the Doctor and co. assigned by the White Guardian to undo the Black's interference in time, which has left the universe in peril due to the Doctor staying on Gallifrey and becoming president. Now that everyone in the universe has invaded Earth, they've got to put reality right by collecting the six segments of the Key to Time again. The first time round this required a 26-episode season, but this time they manage it in ten pages. It's really just an excuse for a whistle-stop tour of classic stories with cameos by all the previous Doctors. Cornell manages to include a tense Sixth-Seventh Doctor scene, which is the highlight of the strip.

"Cuckoo" is of a highlight of the collection. Another one by Abnett, this three-parter sees the Doctor and his two no-nonsense female companions go back to the 19th century and face that sexist society head-on. Subtle as a brick but really not bad at all, it also features some lovely palaeontology at the hands of a transparent Mary Anning-pastiche. Quite why Abnett bottled it at the last minute and decided not to use real figures and instead use fictionalised versions I'm not sure. When James Quick and I wrote a similar story we used Anning herself and focused on details of her remarkable life. Big Finish are now going to feature her in a story as well. Given how much Abnett is clearly into this in his commentary, I wonder why he didn't just go all the way with it. (He talks about the Mantell's finding the first Iguanodon fossil - that was in my town of birth, Cuckfield, but unlike his native Maidstone, they don't have one on their coat of arms. I have suggested it.)

"Cuckoo" features an excellently realised monster by Jo Ridgway, and a clever contrast between the Doctor's priorities in this story and those of Benny and Ace. It's easily the best story in the collection for me. Finally there's Gray's one-shot, "Uninvited Guest," which sees the Doctor crash a party of Eternals and mete out his own brand of inhuman justice. It's here that I feel we see the real Doctor of the New Adventures, the one who worked to his own morality and was echoed in the television adaptation of perhaps the greatest NA, Cornell's Human Nature. We're reminded that this silly little man is someone you never want to be on the wrong side of. And with that, just when they seemed to get the hang of him, DWM dropped the Seventh Doctor and the NA links and went with a rotating series of past Doctor adventures.

Placement: The strips begin shortly after Love and War and continue up to around the time of Legacy. The Sixth Doctor strips take place at some point not long after Revelation of the Daleks.