WHO REVIEW: Nemesis of the Daleks

Nemesis of the Daleks, the latest of Panini’s Doctor Who preprint collections, boasts an especially gripping and enticing title. It begs a question: just who is the Daleks’ nemesis? There are two candidates in the volume. One, of course, is the Doctor. The other is a chainsaw wielding maniac named Abslom Daak.

Daak has a special place in many fans’ hearts. Originating in Doctor Who Weekly’s back-up strips, the man dedicated to wiping the Daleks from the face of the universe is an eighties relic, who nonetheless made reappearances in the main strip in the later iteration of the magazine, Doctor Who Monthly, and even in the New Adventures. Two of his more memorable lines were even quoted, slightly paraphrased, in the 2005 TV series. clearly, he made an impression in Russell T. Davies, as well as countless young DWW readers. Personally, I can’t stand the character.

Previous to this, I knew Daak only by reputation and his solitary New Adventures appearance. This collection includes not only his original 1980 back-up strip appearances but his later 1989 return in the title comic serial.  Some commentators have suggested that Daak is a parody of the sort of in-yer-face, macho characters that 2000AD revels in, while creator Steve Moore suggests his emotional background gives him hidden depths. As far as I can see, though, all there is to Daak is an in-yer-face, macho thug, bolstered by some clichéd character traits and some diabolical dialogue.

In his first appearance, ‘Abslom Daak… Dalek Killer!’ Daak is charged with numerous counts of murder and pillage, and sentenced to exile as a Dalek Killer. He arrives on the planet Mazam, where he rescues the local leader Princess Taiyin, and then proceeds to battle the Daleks for the planet armed with his trusty ‘chain-sword.’ The death-obsessed lunatic is the only the way he is because his girlfriend dumped him for his partner in crime, the poor poppet. However, he forgets about her once Taiyin falls for him; naturally, every girl gets her head turned by a brutal murderer who threatens her and subjects her to continual danger and verbal abuse. Of course, Taiyin is killed too, making our ‘hero’ extra tragic. He then vows to “kill every damned, stinking Dalek in the Galaxy!” while carting her corpse around in a fridge for the rest of his life.

The extended sequel, ‘Star Tigers,’ is a considerable improvement. This serial explores both Daak’s history and the wider universe of Doctor Who’s 26th century. He accrues around him an untrustworthy crew consisting of Saladar, a disgraced Draconian noble; Harma, a sluggish Martian; and Mercurius, his wily ex-partner. The first segment takes place on Draconia and barely features the Daleks, instead focussing on the machinations of Draconian politics. Daak makes an impression by blasting his way through a Dalek force whilst off his face (yes, he’s a drunk as well). The second half collects the various characters together, setting up an ongoing story that never reached its conclusion. While all three parts of Daak’s original storyline are action-packed, and illustrated with Steve Dillon and David Lloyd’s excellent artwork, they strike me as little more than overblown macho dross. Perhaps I’m just too old to first encounter the character; I’m sure that he was terribly appealing to nerdy ten-year-olds who avoided P.E.

While I struggle to see the appeal of Moore’s original version of Daak, he’s a peach compared to the version who resurfaced in ‘Nemesis of the Daleks’ nine years later. Scripted by Steve Alan, this version of Daak loses what little depth he had and becomes little more than an angry retard swinging a razor-edged cock extension. As a back-up character he’s one thing, but forced into Doctor Who proper he makes a very uncomfortable addition. The storyline brings together various elements of Dalek fiction, even bringing in the bulbous, golden Emperor from the old Dalek Chronicles strips (something which  bemuses the Doctor, a character from an altogether different branch of continuity). These little winks are the best the story has to offer, with the Star Tigers – the interesting characters – killed off in the first few frames, and a very generic storyline. Only Lee Sullivan’s artwork is worth praising here.  Daak is killed at the end, but even that doesn’t stop him coming back for a future instalment. Joy, something to look forward to there. 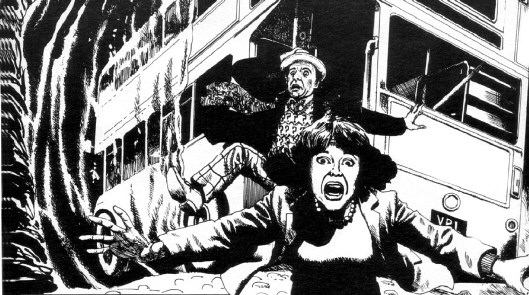 Beyond Abslom Daak, this collection features the continuous run of DWM strips from October ’89 to June ’90, the beginnings of the wilderness years. It also includes the short strips that featured in the short-lived The Incredible Hulk Presents… anthology comic of the same period. Sadly, the early seventh Doctor comics were not an golden era for the medium. The TIHP strips in particular were aimed at a younger audience, although there are some good stories amongst the dross.

The best stories include ‘Hunger from the Ends of Time!’ a two-parter from the industrious Dan Abnett, whose strips I have been reading for donkey’s years (he wrote for The Real Ghostbusters back in this period, too). Featuring the return of futuristic UNIT-descendant the Foreign Hazard Duty, this is more big-guns-action but has some thought behind it, with an intriguing concept at its heart. Sadly, it just seems to stop just when things are getting interesting. John Ridgway’s artwork is, as always, superb.
John Freeman’s ‘War World’ is a very brief but rather effective sci-fi puzzler, hampered by some shockingly poor artwork by Art Wetherell and Dave Hardwood. John Tomlinson’s ‘The Sentinel’ is a fairly effective piece, in which the TARDIS crashlands on Cenozic Earth and meets Seneschal, a morose being who has been shepherding life throughout the aeons. It’s fairly amusing in an Adams-y sort of way, with Sensechal disappointed by humanity and considering them a huge waste of time. It also cheekily plays around with some of Doctor Who’s core mythology.

‘Who’s That Girl!’ is a cracking strip, in which a fake female Doctor arrives on a tactically-important planet with a nefarious plan in mind. The lady Doctor is a leggy stunner in a cute mishmash of past Doctors’ accoutrements, and is revealed to be Kasgi, an interesting and amoral assassin. Sadly, she never returned to the strip, in spite of being far more promising an antihero than that hairy bloke with the chainsaw. Kudos to Simon Furman and John Marshall for the standout strip of the volume.

Finally, ‘Nineveh’ concluded the run of TIHP strips in fine style, with a creepy tale set in a TARDIS graveyard. With more than a hint of the much later The Doctor’s Wife, this sees the Doctor face a reaper-like being that claims each unlucky Time Lord at the end of his final life. John Tomlinson provides a script with some baffling dialogue but winning ideas, while Cam Smith is responsible for the atmospheric artwork.

The remaining strips from The Incredible Hulk , ‘Once in a Lifetime,’ ‘Technical Hitch,’ ‘A Switch in Time,’ ‘The Enlightenment of Ly-Chee the Wise’ and ‘Slimmer!’ occupy spaces of the quality scale from mediocre down to dreadful, and aren’t really worth worrying about. Thankfully, none of them have much chance to outstay their welcome.

From the DWM originals, ‘Stairway to Heaven’ is notable mostly for being Paul Cornell’s first contribution to the world of Doctor Who fiction, working with John Freeman. It’s a grim old tale but an inventive one. ‘Doctor Conkeror!’ is a TIHP strip in all but name, having originally been created for that publication. It’s a lightweight bit of fluff, but inoffensive. It does boast some fine artwork from Mike Collins.

‘Train-Flight,’ by Andrew Donkin and Graham Brand, is a return to the longer serialised strip format of the not-so-distant past of DWM. It also begins to bring the strip back to the TV series that spawned it, although said series had by this point been cancelled. Ace doesn’t quite make it into the strip yet, although she does get a mention, and it’s Sarah-Jane who comes along for the ride, in a rather touching reunion with the Doctor that pre-empts the episode School Reunion by seventeen years. There’s no real reason for Sarah to be there other than fan service, but this is an enjoyable story with some arresting images, and an effective enough if unoriginal monster in the insectoid Kalik. John Ridgway supplies the art again, creating some beautifully strange vistas in the Kalik habitat.

One thing that makes these Panini collections standout is the extensive and informative commentary section that accompanies the reprinted strips. This volume gives the reader a great insight into a somewhat turbulent period in DWM’s history, exploring the consequences for the strip of a to-ing and fro-ing budget and analysing the failed TIHP experiment (which partnered The Incredible Hulk with not only Doctor Who but G.I. Joe and Indiana Jones!) Steve Moore gives a great deal of thought into the creation of Abslom Daak, but I can’t say he has changed my view on the character. It’s also very nice to see Altered Vistas get a shout out, considering that they have not only celebrated Moore's  work but all Doctor Who and Dalek comics through the years. These volumes remain excellent pieces for fans of classic comics; hopefully the next volume of seventh Doctor strips will provide material that matches the quality of the research and interviews that accompany them.
Posted by Daniel Tessier at 15:47