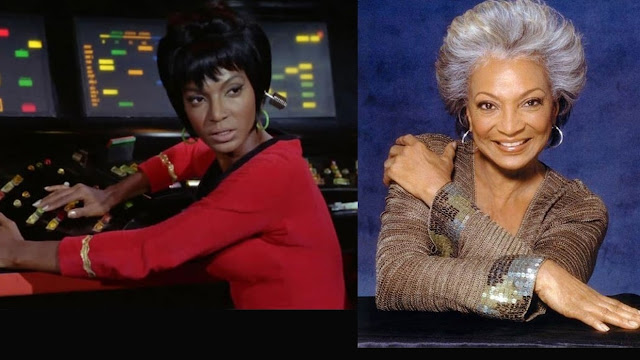 After only days, we've lost another one of the greats. Nichelle Nicholas has died, aged 89.

Nichols will always be best known for her role as Uhura on the original Star Trek series, which she returned to for the animated follow-up, the first six Trek movies and fan productions including First Frontier and Of Gods and Men. While Uhura's role in most episodes was fairly small, her position on the bridge of the Starfleet ship as communications officer was groundbreaking for American television at the time. With her understated performance and captivating singing voice, Nichols made Uhura a fan favourite, as well as inspiring a generation of black women. Whoopi Goldberg has spoken frequently about how she was inspired by Uhura's presence on the bridge as a black woman on TV “who ain't no maid!” Dr. Martin Luther King famously encouraged Nichols to stay on the series when she was considering leaving, aware of the positive effect her presence was having on the image of black people in an inclusive future.

Dr. Mae Jemison, the first black woman to travel to space, cited Uhura as an inspiration for her choice of career. Indeed, Nichols was recruited by NASA as a spokesperson to help bring women and BAME people into the agency, which remained almost entirely white and male in the 1970s. Among her recruits were Sally Ride, the first American woman in space, and Charles Bolden, later the NASA Administrator.

Zoe Salana and Celia Rose Gooding, who play Uhura in the Kelvin Timeline Star Trek movies and the new Strange New Worlds series respectively, and Sonequa Martin-Green, Burnham on Discovery, have spoken about how they would be unlikely to have the careers they have without Nichols and her example. They continue to promote the inclusion of BAME women not only in film and television, but also in STEM careers as their characters continue to show this as a desirable career path for women and people of colour.

Beyond Star Trek, Nichols appeared in such series as Heroes, Gargoyles, and Batman: The Animated Series, and films such as Lady Magdalene's and Snow Dogs.

Posted by Daniel Tessier at 11:57 No comments: