WHO REVIEW: 7.5 - The Angels Take Manhattan 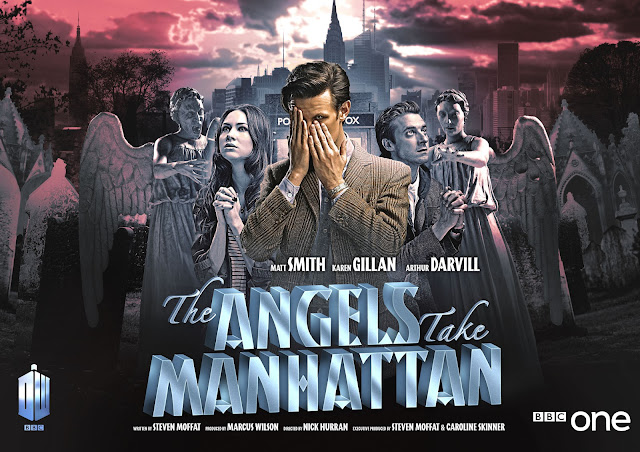 So, that was Amy and Rory then. The end of a very short ‘season’ of adventures, and of a long and complex relationship between two young Brits and an extraterrestrial. It’s been an emotional and convoluted journey, and it’s ended like it began: full of temporal anomalies and plot holes. But my, what fun it’s been. 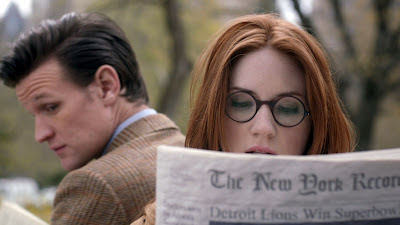 The Angels Take Manhattan is, primarily, Amy and Rory’s episode, but the Doctor, River and the Angels themselves all get some decent characterisation or exploration. Did it need to be set in New York? Not at all; it would have worked just as well in Cardiff or London, but the setting certainly adds something to the episode. The location work is a boon; the city is brought to life in some gorgeous shots, both in the bustling New York of 2012 and the grim night of gumshoe 1938. We have only a handful of incidental characters; the only one that makes an impression is Grayle, the collecting crime lord. Mike McShane (still, for me, the Who’s Line is it Anyway? guy) gives him a personality beyond what such a character deserves; he is, after all, just there as a plot mechanism.


The Angels themselves work beautifully here. I’m on record as being of the opinion that their first appearance should have been their last; this episode has given me reason to reconsider. They are utilised far better here than in Series Five’s two-parter, still recognisably working to their original MO yet being expanded into a broader creation. The concept of a battery farm for human prey is inventive and chilling; I’m not sure it really makes sense for them to need one, if they’ve got the whole of New York at their mercy, but it’s still a fine idea. (And who knows? Perhaps they need to avoid twisting the timeline to much. Time-shifting everyone in New York would mess things up pretty drastically.) While I’m not sure quite how they’ve taken over all the statues in the city, it does provide some memorable visuals. The baby Angels, creepy little cherubs, are fantastic, and their little giggle is quite unsettling (although they sound exactly like the Boos in the Super Mario games, which pulled me out of the moment rather suddenly). 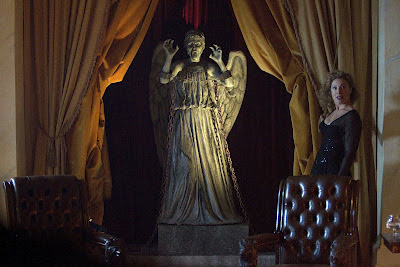 If there’s a single concept or visual that’s going to stick in people’s minds after watching this episode, it’s the Statue of Liberty. Making the most iconic statue in the world into a Weeping Angel was surely an irresistible conceit for the show’s creators, and few shows would have the balls to pull off something quite so absurd. Even a moment’s thought shoots this idea to bits, though; I refuse to believe that there’s a single moment when nobody is looking at the Statue. Angel or not, it should be permanently rooted to the spot (except when animated by positively-charged mood slime by the Ghostbusters, of course).

The central concept, of being part of a story and the perils involved therein, is a beauty. It does, after all, tie in to the fairytale ethos of the series in the eleventh Doctor era so far, but is here brought to the fore like never before. In a series in which time has been seen to be changed again and again, we needed an episode like this to put some boundaries back in. There’s no drama if the hero can nip back and sort everything out again later; contrived though it may be, setting the Doctor’s story down an inalterable path removes some of his ever-increasing power, and rightly so. “Time can be rewritten,” points out Amy. “Not once you’ve read it,” responds the Doctor. Other episodes might disagree on this point, but here, it works beautifully, giving the story real drama and impetus.

While there are moments when the time-travel threatens to become the star of the show, Moffat keeps thing rooted in the experiences and reactions of his character. When Amy reads ahead, the Doctor is fated to break River’s wrist. OK, he doesn’t actually break it himself, but leads it to happen, and the resulting confrontation between the two of them is extremely powerful. Indeed, this is the first time that River and the Doctor have actually felt like a couple, be they bickering, flirting or faffing about with the TARDIS lightbulb. Equally, the friendship between Amy, Rory and the Doctor has never felt stronger or more natural than when they’re all larking about in the park at the beginning. It makes the eventual outcome of this adventure all the more poignant. 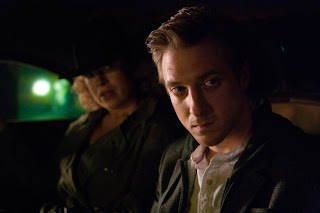 Rory, once again, proves himself to be the greatest hero of the series, willing to risk sacrificing himself if it will give him at least a chance to live his life with Amy. The episodes leading up to this have reinforced their love for each other, and this is the payoff. The Doctor, for his part, is for once powerless to change events. He is genuinely panicky and angry, in a way we so rarely get to see. This story is all about endings, and, as River points out, the Doctor doesn’t like endings. Why would a man who can seemingly never die feel able to accept an ending? When Amy goes to the ageing Rory on his deathbed, the Doctor can’t bring himself to watch. When the pair of them are about to leap from the building, creating an ingenious paradox to defeat the Angels, he is completely unable to stop them. It’s good to see him powerless for once.

In a way, it’s a shame that we knew in advance that this was to be Amy and Rory’s last episode. When the paradox has wiped the Angel’s farm from history, we’d think that, once again, quick-thinking and bravery had saved the day. The sudden disappearance of Rory would be a huge shock, robbing us of the victory. As it is, we expect something else to happen to him and his wife, because we know they’re leaving. Nonetheless, it’s a powerful scene, and it’s both saddening, and tremendously heartwarming, to see Amy give up her life with the Doctor to be with Rory. In Moffat’s version of Doctor Who, were people so rarely die truly and the heroes can come back to life again and again, there was no other way to end this story. It’s a testament to his writing and the actors’ skills that it’s so very affecting. 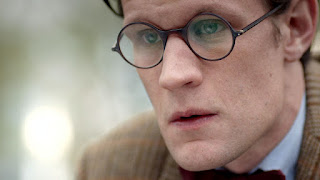 It’s not a perfect episode. I don’t quite buy the reasons for the Doctor being unable to go back and see his friends, temporal scrambling or not. It certainly works dramatically,but it’s best not to think too closely about it. I hate the use of slow-motion to ramp up the emotion and stretch things out. Also, unless we’ve missed a big scene out, River and the Doctor leave a weakened but still predatory Weeping Angel roaming about New York. These are pretty minor points, though. I subjected this episode the ultimate test: watching it with someone who had never seen Doctor Who before. Nabeela, watching it for the first time with me, at work (and with English as her second language), had no trouble following it. A couple of bits of backstory needed explaining, but I assured her most of that wasn’t important. Her response, once it had finished: “Now that’s science fiction.”

Doctor Data: River confirms that the Doctor has been erasing himself from all the databases in the universe, something that started in Asylum of the Daleks and has run throughout this semi-season. So, what about UNIT? Did he leave them out deliberately, or did they confound his plans somehow?
The Doctor also displays another new superpower: the ability to heal an injury on another person by giving up some of his regeneration energy. It’s similar to what River did to save his life in Let’s Kill Hitler, and not unlike his little bit of TARDIS-boosting energy in Rise of the Cybermen, but we’ve never seen anything quite like that before.

Pond Life: Amy Pond has been the longest serving TARDIS travelling companion since Doctor Who returned in 2005, appearing in every one of the thirty-three episodes to star Matt Smith so far. Rory comes a pretty close second (OK, technically Rose appears in more episodes than both of them, but some of them are very brief cameos and she left are twenty-seven then came back, so it’s not quite the same thing.)

River’s Run: For once, River meets the Doctor in the correct order – this takes place after their wedding for the both of them. A thought: River’s earlier self regenerated into a toddler in New York, 1969. So, do Amy and Rory find her? Do they get to raise her after all, before she goes off to Leadworth to grow up with their younger selves? It’s not impossible; River conceals a lot, so she wouldn’t necessarily have mentioned it to them before.

Hanky-Panky in the TARDIS: “Melody Malone” describes herself as “packing cleavage that could fell an ox at twenty feet,” and she’s not lying. For their last appearance, Amy and Rory are looking great; Amy is very cute in her reading glasses, and Rory’s outfit is very sharp. Oh, and whatever Rory may say, there’s nothing wrong with fancying a character in a book.

Best Line: “I’ve always wanted to visit the Statue of Liberty. I guess she got impatient.”

One Final Thought: That final scene, in which the Doctor goes back to see young Amelia and tell her the story of her life… beautifully done, great to Caitlin back as Amelia, and it thematically completes both the episode and the whole era. But isn’t he changing her whole history, and by extension, his as well? Did any of that happen like we saw it over the last three years?
Posted by Daniel Tessier at 17:35