It’s one of those well-known stories. At a showing of The Holy Grail, Eric Idle quipped that the Pythons’ next film was going to be titled ‘Jesus Christ: Lust for Glory.’ The six comic gods tried to use this as the basis for a film, but it went nowhere. As they said, the “comedy just dried up” whenever Jesus was around. So they came up with the idea of a film about someone who lived at the same time as Jesus, and who was mistaken for him. The Life of Brian was born, and passed into comedy history.

‘Lemons’ takes a similar sort of idea, but entirely fails to make it work. The conceit of having the Dwarfers meet Jesus Christ is a diamond, and should be a source of some excellent comedy. And sure, it has its moments. The trek across Eurasia to find lemons is a funny idea, Rimmer’s fanboy reaction to another famous historical figure is a great Arnie moment, and the ‘Last Supper’ parody is quite fun, even if it is tragically unoriginal. There’s not enough though. The problem is, the laughs do dry up when Jesus is around. The bag joke is funny for a bit, but is dragged on too long, and while having Jesus start attacking the concept of Christianity (or Judaism, really, since it’s all Old Testament) could be used a source of biting satire, it’s rapidly thrown away after some very half-hearted comments. The best joke - the "Jesus!" "Yes?" reveal - was given away in the trailer. Geordie Jesus turns out to be a case of mistaken identity, but by this stage, it’s hard to give a damn anyway. 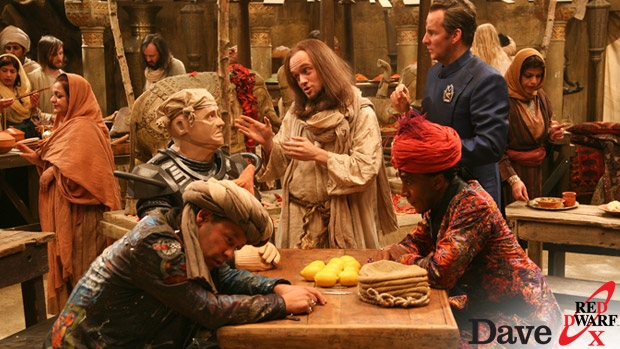 Rimmer really is the best thing in this episode. Chris Barrie gets the best material, and makes good use of it. His family were in the Church of Judas –  I thought they were Seventh Day Advent Hoppists? If Doug Naylor and the producers are going to bring on old musical cues to appease fan nostalgia, they need to remember that we’ve seen this all before. The Dwarfers have gone back in time and met historical figures plenty of times before. Apart from the impressive sets, there’s nothing to set this apart from earlier, better examples. ‘Meltdown,’ the weakest  episode of Series IV, did the juxtaposition of historical men of peace with futuristic tech much better, and got a better Gandhi joke out of it.

Oh, and I take it Kochanski’s coming back at the end of the series? “Finding Kochanski” has been mentioned by Lister once in each episode. Will she rescue them all from Simulants in episode six?