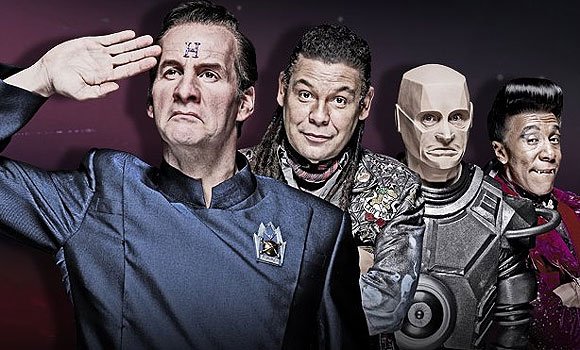 Well, I greeted the news of a new series of Red Dwarf with cynical pessimism. Then the clips began to trickle out, and my excitement began to build. This actually looked it might be a return to form. In the end, it was OK. I don’t think anyone can argue that the recent series hold up to the classic years of the show (which could be anything from series two to six, depending on taste). This certainly felt more like Red Dwarf than the misguided Back to Earth miniseries, although it was qualitatively different from earlier series. The jokes came thick and fast, and there were more hits than misses.


The running gags worked to an extent; the moose gag wasn’t much to start with, but it built up to a very funny payoff during Rimmer’s revision session. The ongoing joke of Lister being put on hold just went on for far too long, though, although maybe that was the point. There were some great moments, from the Cat’s walking straight past the armed confrontation with the simulant, to Rimmer’s final ‘confession’ to his brother, to the great payoff in the final scene.

Visually, it’s a mixed bag. The sets are great, especially the newly refurbished sleeping quarters, although the sheer amount of off-the-shelf tech strewn about the place isn’t really necessary.  The CGI still doesn’t look as the good as the modelwork from the original run. The beach ball eyes looked terrible; again, maybe that was the point, but combined with the actors’ gurning it looked cheap and shoddy. The costumes were mostly brilliant (loving the Starfleet-style Space Corps uniforms), but Kryten looked shockingly poor. Whatever they were going for with his new make-up and costume, what they’ve ended up with is more like a tacky knock-off action figure version of the mechanoid than the recognisable character. OK, so we can’t do anything about the fact that the guys are older, but the one actor who could hide behind latex and he’s made to look worse than ever!

The episode was nicely linked to the show’s past. Bringing in one of Rimmer’s more successful, high-flying brothers, oft-mentioned but never seen, was a great idea, and it would have been nice to have seen some more of the resentment and one-up-man ship between them instead of wasting time on that bloody phone. Still, I expected that we’d get to see Rimmer struggling to pass his Astro-Navigation exam at last, finally to match his brother. Instead, that plotline is forgotten about and he just lies to him. Sure, that’s funny in itself, but it’s a promising set-up that just gets shut down. Sim Crawford is a good addition to the line-up; a chance to see a ‘non-rogue’ simulant, supposedly still loyal to humanity, although it was pretty obvious she was going to turn on them and be revealed as the villain. Nice to see that magnetic tape has finally been superseded in the Red Dwarf universe (simulants are apparently come with USB ports).  Both Mark Dexter as Howard and Susan Earl as Sim do a good job.

Looks like there’s some set-up for the future here. I’m guessing the Trojan’s drive will be what causes the quantum entanglement in a few episodes’ time, and Red Dwarf now has a burnt-out simulant on board, which may come back to haunt the crew (or more likely be completely forgotten about). There’s some good potential here, but the following episodes need to improve on this one if the new Red Dwarf (or should that be the SS Howard Rimmer?) is really going to fly.

Best Line: (On Kryten) “So you rebuilt him, gave him something to live for?”
“No, we just hosed him down and gave him a hat.”
Posted by Daniel Tessier at 23:04