The big news for Whoheads today is the official announcement that the ZYGONS shall be returning in the 50th anniversary special episode this November. As if the return of David Tennant and Pipey Biller wasn't enough. I'm even more excited to see the Zygons return than the I was to see the Ice Warriors, and so, in the grand tradition of my previous post, here's a quick look at the new Zygon and his 1975 ancestor. 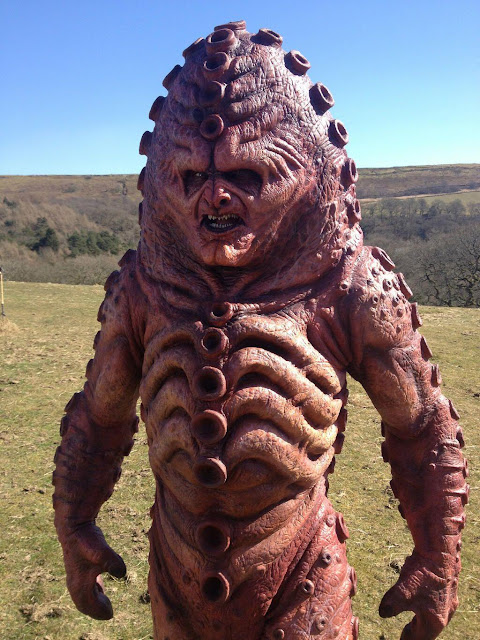 Much like the Ice Warrior, the 21st century Zygon has been designed very much in keeping with his forebear. The original costume was so effective that it could actually pass muster reasonably well today, although the harsh light of HD would probably be to much for the rubber nasty. It was that design that led this one-off monster to go down as a fan favourite, so it's no surprise the new team have done their best to emulate it. 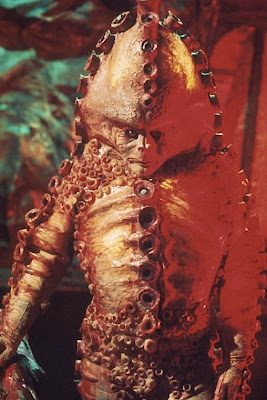 Aside from the improved texture of the flesh, there are some notable differences. The ribbing on the chest is more prominent in the new version, although it has been toned down on the forearms. The numerous sucker-like warts that covered the original have been reduced in number considerably, while the ridges of the face are more pronounced. Colouring is hard to judge based on one image taken in daylight, but it remains similar to the original. I don't recall seeing the Zygon's teeth before, but I like the snaggle-toothed look he's going for now.

What's particularly nice about the Zygons return is that David Tennant will get to face his favourite monsters after all. However, the question still remains: will this be the real tenth Doctor, the half-human clone from Journey's End or nothing more than a Zygon duplicate?
Posted by Daniel Tessier at 00:15

Email ThisBlogThis!Share to TwitterShare to FacebookShare to Pinterest
Labels: Doctor Who, Doctor Who New Series, monsters