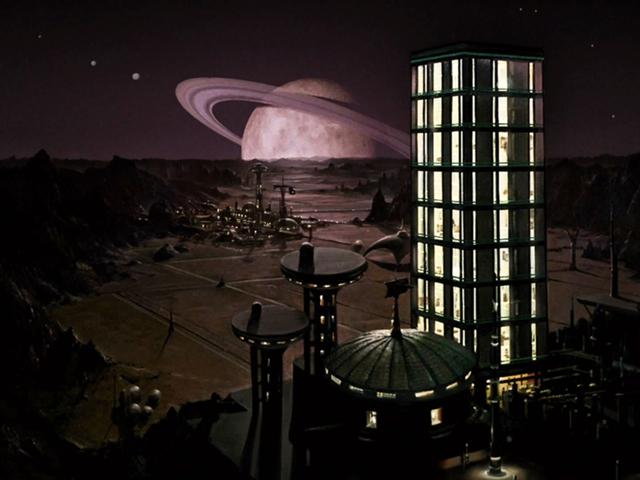 Captain Kirk vs the Reused Footage

The Mission: Discover why Spock has disobeyed direct orders and hijacked the Enterprise.

Planets visited: We return to Starbase 11 (now with a new officer in charge, Mendez), and to Talos IV, “the only forbidden planet in the Galaxy.”

Future History: The events of the first pilot, ‘The Cage,’ are described as having taken place thirteen years prior to this story.

Captain James T: Is shocked by Spock’s betrayal, and initially refuses to believe it. He says he would granted Spock leave to see Pike at a moment’s notice. He also has great respect for Pike.

Captain Christopher Pike: Now designated fleet captain (a senior title outside of the standard naval ranking heirarchy), Pike is one of the most respected officers in Starfleet. He remained commander of the Enterprise until gaining the promotion two years previously, when he passed command to Kirk. Engaged in training exercises aboard an antiquated starship, he saved a number of trainees when a baffle plate ruptured, flooding the ship with radiation. This rendered him a severe invalid, heavily scarred, crippled and unable to speak. He is now confined to a wheelchair, able only to communicate with a flashing light and accompanying bleep: one bleep for yes, two for no.

Green-Blooded Hobgoblin: Has incredible loyalty to Pike, even to the extent that he is prepared to betray the fleet in general, and Kirk in particular. A Vulcan is apparently incapable of disloyalty; evidently, loyalty to Pike is more important to Spock than loyalty to Kirk. He is incredibly clever in the first episode, hijacking the ship using pre-recorded voice discs (where did he get these?) to issue counterfeit orders and reprogramming systems to send the Enterprise to Talos on autopilot. He seems resigned to death penalty for his actions, although he may be aware that his trial is an illusion.

Alien Life Forms: The Talosians, now much more pleasantly disposed towards humanity in general, and Captain Pike in particular. They are capable of projecting a totally convincing image of an individual onto a ship in orbit, interacting realistically, such as posing as Mendez as they do here. They are also capable of presenting playbacks of past events, which gives us the odd sight of Kirk and Spock sitting back to watch Star Trek.

Space Bilge: It’s a shame we couldn’t have Jeffrey Hunter back in Pike’s role, instead of another actor hidden beneath prosthetics. Does Spock need to engage in such elaborate, cloak-and-dagger tactics? How did he contact the Talosians about the matter?

Trivia: This is the only two-part story in the original Trek. An edited feature-length edition was originally released on video. It’s rumoured that Roddenberry originally wanted to use the pilot footage to make a feature film with new effects scenes specially recorded, but it proved too expensive. Reusing the footage to make two new episodes enabled him to keep on target with a struggling production season without creating much new material.

Pop Culture: Futurama’s Trek parody episode ‘Where No Fan Has Gone Before’ draws heavily on this episode; Fry is put on trial and has to use Pike’s wheelchair to communicate in Morse Code.

Verdict: A rather clever way to reuse the unbroadcast pilot episode. Inevitably, ‘The Menagerie’ falls down somewhat when viewed now, when we can all see ‘The Cage’ in more-or-less its original form. Nonetheless, the first half is a genuinely exciting episode, presenting a riveting mystery when Spock begins to act totally out of character. However, the explanations in part two are disappointing, revealing Spock’s behaviour to be totally illogical. The reliance on the reused footage in the second half also slows things down, splitting the attention between two incompatible storylines. Nevertheless, this is surprisingly successful, although it certainly remains better if you haven’t already seen ‘The Cage.’ 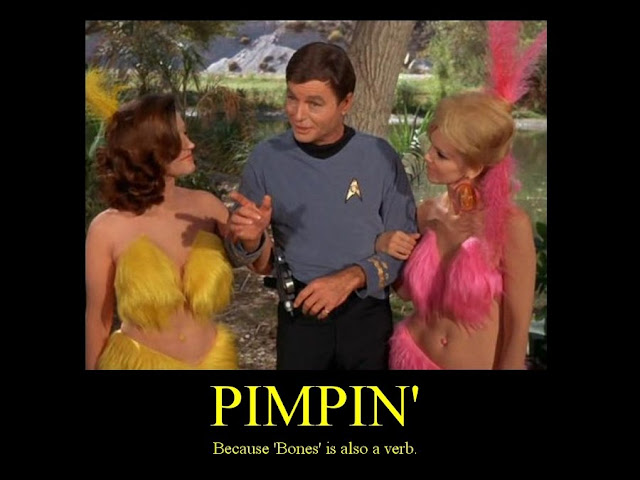 Captain Kirk vs Figments of the Imagination

The Mission: Just take a holiday, guys! You work too hard.

Planets visited: An unnamed Earth-like planet in the Omicron Delta region of space, inhabited solely by plantlife. It turns out to have been constructed from scratch by an advanced alien race for the purposes of amusement. Part of it was filmed at the now-legendary Vasquez Rocks.

Future Treknology: The planet is fitted with advanced machines that read the thoughts and desires of all those present on its surface and synthesise it for their ‘amusement.’ They can create anything from simple artefacts, to machines, to facsimile life forms. All the plants, animals and human constructs are composed of a form of synthetic tissue. Similar techniques can heal the injured McCoy. There’s also an energy field surrounding the planet that slowly increases in intensity and cuts off communications. For all the advanced technology, the aerials and trap doors we see have a very lo-tech look.

Alien Life Forms: We never find out just who the planet’s creators are; the ‘caretaker’ who explains the situation at the end decrees that humans aren’t ready to meet them yet. He still allows them to enjoy the facilities, though. He appears to be human, although this is almost certainly a simulacrum for the comfort of the visitors.

Captain James T: His main fantasy, oddly enough, involves conjuring up Finnegan, the jock who bullied him at the Academy. Whether Finnegan was such a comedy Irishman in real life, or whether Kirk just remembers him like that, is open to question. Kirk gets his rocks off having a punch-up with the guy - something he’s always wanted to do. Perhaps all these scraps with aliens over the years act as therapy for him - he does seem to have a lot of repressed anger to get out of his system.

Shirtless Kirk Alert: His shirt gets ripped again in the fight with Finnegan. He should carry some safety-pins in his trouser pocket.

The Real McCoy: He’s the first to see something weird on the planet - Alice chasing the White Rabbit - and thinks he’s going nuts as a result. He’s apparently killed by the Black Knight. It’s a satisfying moment - normally standing your ground and saying “It doesn’t exist!” stops things in stories like this; here, it leads to a lance through the chest. We have to wonder though… is McCoy really healed by the alien machinery? Or is he simply reproduced as a simulacrum, no more real than the knight who kills him? Is this the real McCoy? Or have we been following a fake all these years? Surely not… 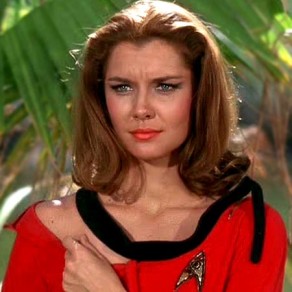 Sexy Trek: Kirk conjures up an image of an old lover, Ruth, who has some questionable taste in clothing. McCoy, meanwhile, has something of a romance with this episode’s yeoman, Tonia Barrows (the rather beautiful Emily Banks). They definitely seem to like each other. We might suspect that McCoy likes her habit of nearly having her uniform torn off at every available opportunity (she’s worse than Kirk for that), but he seems even more enamoured with her when she’s dressed up as a fairytale princess. When she’s getting changed, she tells him not to peek - to which he replies “My dear girl, I am a doctor. When I peek, it is in the line of duty.” (!) At the end of the episode, he turns up with a floozy on each arm - chorus girls from a trip he had to Rigel II, he says. He lets Sulu play with the girls in their fur bikinis, and sticks with Barrows. What a gent. For her part, she conjurs up Don Juan, he assaults her, which suggests uncomfortable things about her sexual proclivities (or the writer’s).


Author, Author: This episode was the first by Theodore Sturgeon, a noted science fiction author, who wrote, among other things, the seminal More Than Human.

Several novels continue the McCoy-Barrows relationship - in some, they’re even said to be briefly married!

Verdict: A silly, lightweight episode, but a fun one. It’s a shame there’s no real jeopardy here, but the characters don’t know that.