WHO REVIEW: THE AZTECS Special Edition - including GALAXY 4

The Aztecs is one of the few Doctor Who stories that are loved throughout fandom. It’s an obvious choice for the special edition treatment, unlike some of the more peculiar inclusions (The Visitation next month? For why?) Nonetheless, I’m not entirely sure that this serial benefits terribly well from being seen on DVD. The VidFire process used to clean up the stock often causes blurriness in scenes with lots of motion, and The Aztecs, with its many action sequences, suffers badly. There are points in the story that I struggled to make out at all, so smeared as the overall effect. Conversely, still elements in the longer, calmer scenes are picked out in clarity, such as the backdrops of the Aztec city, now robbed of much of its impact by being shown very clearly to be painted backgrounds. This is not to denigrate the work of the restorers, but I do feel that this story is one that looked better on scratchy old film.

Where DVD serves The Aztecs well is in the sound quality. This story boasts a lyrical, almost Shakespearean style of dialogue and some effective incidental music, and to be able to hear all this with clarity is essential. This story has a glowing reputation for a reason, with a straightforward yet thought-provoking plot that is brought to life by an excellent script performed by some of the series’ finest regulars and guest actors. The special edition provides, as I understand it, the single disc of the original release, along with a second disc of newly included material, including the much awaited ‘Air Lock,’ the recently rediscovered third episode of Galaxy 4.

Some commentators accuse the most recent episodes of Doctor Who of being too complicated to follow. While I disagree with this, I do see their point, and The Aztecs provides a perfect example of a script with plenty of incident, intrigue and surprising developments that nonetheless remains very easy to follow. From the moment Barbara arrives in Yetaxa’s tomb and foolishly tries on the dead priest’s bracelet, she and her fellow travellers are pulled deeper and deeper into a situation beyond their control. Their efforts to extricate themselves from danger and return to the TARDIS merely pull them further into the mire, leaving them prone to the machinations of their hosts and thus pitting them unwittingly against each other. It sounds complicated, but the leisurely pace and straightforward explanations of developments keep everything clear.

One criticism that can be made of The Aztecs is that is suffers very badly from Doctor Who’s early educational remit. There are some very clunky info-dumps in this serial, as Barbara and Susan discuss Aztec culture as if they were in the schoolroom. However, this actually works to the story’s favour, emphasising the main reason Barbara has brought them all into this mess. She treats her presence in ancient Mexico as if it were a history project. She enters the tomb and begins routing around in the remains as a golden opportunity for archaeological exploration. It never occurs to her that the remains are merely years old, not centuries, and that the Aztec Empire continues to thrive just outside the temple in which she stands.

She continues to treat her situation like this even once she has been pulled into the Aztecs’ world. It may seem absurd that the Aztecs would immediately assume that the strangely clothed woman in the stolen bracelet is the reincarnation of their high priest and a living god, but these are the people who supposedly believed the invading Cortes was the avatar of Quetzalcoatl and welcomed him with open arms just a matter of year after this story is set. (This claim is believed to be a myth by most modern historians, but Valerie Singleton still happily proclaimed it in the 1970 Blue Peter feature included on disc one). Barbara’s steadfast belief that she can help the Aztec civilisation move beyond its reliance on sacrifice and thereby save it from Cortes’ Christianising demolition of their culture is profoundly arrogant, but stems from a genuine love of a culture she has studied in depth. 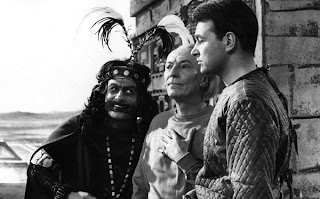 Immediately she makes enemies in this land. Tlotoxl, the Priest of Sacrifice, is rapidly and dangerously against her. He’s one of the great villains of the series, played with relish by John Ringham in the mode of Olivier’s Richard III. An intelligent, amoral schemer, Tlotoxl portrays himself as a defender of the Aztec faith against a false god, but he’s anything but. He is perfectly happy to serve Yetaxa until she threatens his position by calling off a sacrifice to the rain god. Tlotoxl is perfectly aware that the rains will come and the eclipse will end with or without a sacrifice, but his position of wealth and influence relies on the rest of his people believing the continual sacrifices are essential to secure their way of life.

On the other hand, Barbara develops a strong friendship with Autloc, the High Priest of Knowledge. While his initial respect for is based on his belief that she is Yetaxa, Autloc and Barbara develop a strong mutual respect for each other as people. At the end of these events, Autloc’s faith is shattered, and the script takes a surprisingly even-handed view of this, considering Doctor Who’s usually anti-religious stance. While Barbara shows tremendous guilt at how she has lied to and damaged the one man she respected in this place, the Doctor points out that, in his self-imposed exile, Autloc might well survive longer than he would had he stayed, with the Spaniards on the way. Keith Pyott’s performance is quietly dignified and provides a perfect counterpoint to Ringham’s scenery-chewing.

While it’s Barbara’s story, the remaining leads are all at their best. Ian is declared to be Yetaxa’s warrior, pitting him unwillingly against Ixta, the greatest warrior of the city. He’s an untrustworthy little maniac and Tlotoxl’s pet thug, only seeming to care about being the best soldier in Aztec history and winning fights through any means possible. He’s probably compensating for something. Thankfully, for a science teacher Ian’s a bit of a ninja, using his Coal Hill nerve pinch on the warrior and even holding his own for some time after Ixta drugs him with a poison cactus thorn. Susan is on fine form in this story, ironically considering that Carole Ann Ford was on holiday for half of it. Instead of the usual screaming and falling over, Susan gets to rail against the teachings of the Aztec culture. Unlike Barbara’s more constructive outlook, Susan has no time for superstitious primitives, and refuses to marry the Perfect Victim, a big hunk of man who’s going to be dead in a few hours anyway. (The less said about this guy the better, though. Perfect Victim but a dreadful actor.) As far as she’s concerned, the Aztecs are monsters – and this is from someone who was facing down Daleks not long ago.

It’s also a very strong story for the Doctor. It features one of Hartnell’s best-remembered scenes, his set-to with Barbara forbidding changes to history, with the famous “Not one line!” speech. By this stage, the relationship between the Doctor and Barbara had already grown into one of respect – not unlike her friendship with Autloc, come to think of it – and so there argument here is serious. This isn’t the Doctor squabbling, this is genuine anger against something he believes in fully. While he happily describes Tlotoxl as a butcher, he makes no judgments of the Aztecs’ culture and clearly admires them as much a Barbara does. Nonetheless, he refuses to entertain for a moment the prospect of saving them from their fate.

While this angle is among the most celebrated of the story, equally as illuminating of the Doctor’s character is his romance with Cameca. Wonderfully portrayed by Margot van der Burgh, Cameca steals the Doctor’s heart from the moment he spots her in the walled garden. Whatever some fans might claim, the Doctor is clearly besotted with the woman, and there’s a genuinely sweet sundowner romance played out throughout the four episodes. While it’s played for laughs as much as drama, it’s a clear indication that romance for the Doctor wasn’t the taboo subject it was later made out to be. There’s a somewhat cruel side to the Doctor here, going along with the charade of an engagement while all the while using Cameca’s connections to further his escape. Nonetheless, their final parting says it all – the Doctor really is smitten. 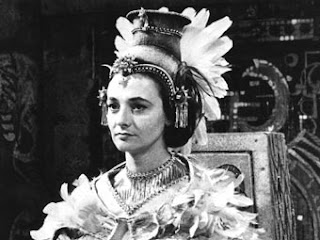 However, for all Hartnell, Ford and Russell bring to the serial, The Aztecs belongs to Jacqueline Hill as Barbara. Her desire to save the Aztecs is misguided and never had a chance of success – their civilisation was pretty much doomed anyway, with ever more people sacrificed as their culture turned inwards on itself, even without the devastation wrought by Cortes and his men. Still, if anyone could have pulled it off, it’s Barbara Wright, a woman brave enough and ballsy enough to take up the mantel of a living goddess and able to fight her enemies with words as easily as a swiftly drawn knife. All due respect to the Doctor; I wouldn’t have argued with her.