What’s the opposite of ‘hot on the heels?’ Hot on the shoulders? Whatever the term should be, Countdown to Darkness is it, leading us up to the hotly anticipated Star Trek Into Darkness, due to finally reach our cinematic screens next month. In fact, judging by the final page of the fourth and final issue, leading us right into the movie. Don’t worry, there are no actual answers here, just questions, and it’s not like this is going to be required reading if you want to understand the film. We don’t discover the true identity of John Harrison, or anything like that. Countdown to Darkness (or hereafter, ‘C2D’) tells a discreet story that jots in the general political background of Trek’s New Universe while telling a decent yarn in its own right.

C2D follows on from IDW’s ongoing Trek series (which, I’ll admit, I’m not completely up to date with), exploring these new, younger versions of the classic series’ core characters. Kirk is experiencing a steep learning curve now that he’s in the captain’s chair for real. Spock continues  taking unnecessary risks as a form of self-punishment, an expression of his trauma at his world’s destruction. He’s experiencing survivor’s guilt, made particularly acute by the death of his mother, and his decisions are becoming increasingly illogical and emotionally driven. Naturally this is putting a strain on his relationship with Uhura, who remains the third part of the core trio in this new version of Star Trek (Bones having been relegated to a stalwart regular secondary character, on the same sort of level as Sulu and Chekov). On the flipside, their mutual concern for Spock has improved the relationship between Uhura and Kirk. I suspect we’ll see further developments in this vein once STID arrives.

C2D concerns an observational mission to the planet Phaedus IV gone awry. The Phaedans are a species developing nicely through their preindustrial phase, and are pleasingly far from the generic humanoids Trek always used to rely on – David Messina’s insect-like designs are highly effective, somehow managing to convey some little emotion through a mandibular beetle-like face. Someone has been interfering with Phaedan society, supplying both an overbearing, genocidal nation and a downtrodden racial group with sophisticated weaponry. The first issue ends with a fantastic reveal of who is behind the interference on the underdogs’ side: Captain Robert April. 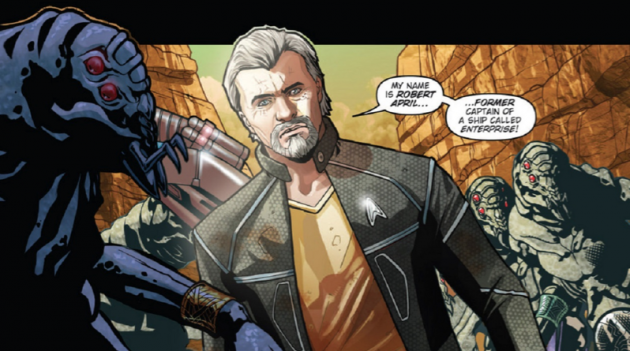 I’d really hoped April would turn up in the upcoming movie; I was convinced that Peter Weller’s character was going to be him, but apparently that’s not the case. Perhaps for the best; I’ve always wanted Leslie Neilsen to play him. He’s portrayed brilliantly here, a headstrong, grizzled old space captain, thought to have died in service years earlier, committed to his own ideals and vehemently opposed to the Federation’s enemies. If anyone has read Abnett and Edgington’s Early Voyages comic series, then they should share my appreciation that these aspects of his character have been retained in the Trek comics. April was naturally going to be a tricky fit in the history of the New Universe; he can’t be the first captain of the Enterprise since in this version of events, that’s Pike. Writers Orci and Messina have come up with a simple solution; there was an earlier Enterprise. I guess this could be the old NX-01 roped back into service, but I should imagine that this is the New Universe’s equivalent of the classic Enterprise from the original series.  It actually pulls the timeline back on track a little. In the Prime Universe, the Enterprise is launched in 2245 under April, followed by Pike and then Kirk. I’m speculating that in the New Universe, it’s launched around 2239 under April, who goes missing (“Captain April died commanding the Enterprise on a mission twenty years ago” says Kirk); the ship then passes to Pike, is decommissioned in 2257, and Pike gets the new Enterprise in 2258 (“April’s ship was decommissioned two years ago,” continues Kirk, “I got the new one.”)

Enough of the fanwank, back to the story. It’s easy to side with April, even as he risks our heroes’ lives in pursuit of his goals. The ever-aggravating Prime Directive holds little water for him; he refuses to stand by and watch a program of ethnic cleansing wipe out a peaceful people. What’s more, his ideals are backed by some savvy politics. The bad Phaedans – the Shadows – are being supported by the Klingons, as part of the ongoing Cold War being the Federation and the Empire. It’s a good, old-fashioned Nam allegory, just like Roddenberry used to make. Of course, this means we get to meet some Klingons, rocking the masked look that would have appeared in the 2009 movie. We get a nice glimpse of Kronos, looking just how I remember it, and a peak at the Klingon ships that will doubtlessly appear in STID. Oh, and classic Klingon commander Kor is involved, which is a nice touch. Sadly, his mask/helmet obscures his luxuriant moustache.

The strip is action-packed from start to finish, but with enough verbal interplay between Kirk and April to keep the mind occupied and set things up nicely for the new movie. There’s war brewing between the Federation and the Empire, and Kirk knows it. We also see a lot of the Kirk we know and love from the classic series here, clearly swayed by much of April’s argument even if he despises his methods. Old Jim Kirk never had much time for the Prime Directive either.

There are some oddities. In a gripping development, April takes control of the Enterprise’s bridge, using his own personalised command codes. This would make perfect sense if this was his old ship, but it’s not, it’s the replacement. Still, it may hint that there’s something else going on here, and that April still has influence in Starfleet. Another peculiar addition to the growing lore of the New Universe is the character of Mudd. Not loveable Irish bastard Harry Mudd, but seemingly his daughter, who, from the look of her, is half-Bajoran. Lots of questions there. While it’s great that this version of the Trek universe gets its own Mudd, she really doesn’t get much chance to show her stuff amid all the goings on. Hopefully we’ll see her again and get to know her better, although having a Mudd who’s a sexy blonde alien takes some getting used to.

Countdown to Darkness continues what IDW’s previous supplementary miniseries Countdown and Nero did so well: supporting the new movies with a well-told tale that develops the backdrop. It’s a decent adventure in its own right, but it’s really designed for Trekkies like me. Captain Pike even shows up at the end – is this the first story to feature all three Enterprise captains? Sadly, they don’t get to share a scene together. Something for the sequel?
Posted by Daniel Tessier at 11:44