I knew there was a good chance I was going to love this episode as soon as they dropped a Ghostbusters reference in, just before the titles rolled. Not that the episode has much of a Ghostbusters feel to it; Hide come from a much earlier tradition of creepy ghost stories and pseudoscientific spiritualism, and such television greats as Kneale’s The Stone Tape. It’s long past time that Doctor Who did a proper ghost story, after dabbling with the form and feel with such episodes as The Unquiet Dead, The Empty Child and Blink. However, as much as it appeared we were finally going to have our ghost story at last, Hide changes into something quite different but no less effective.

Much of the fun in this episode comes from seeing how the story mutates as events play out, developing from a haunting to an interdimensional adventure, all the while being, underneath it all, a love story. Some commentators are even complaining now that Doctor Who is turning too many of its episodes into love stories, which is ridiculous. A love story is one of the most powerful, emotionally affecting story types ever devised and, as long as it’s done well, can be profoundly moving. It is, surely, something we can all identify with, those early, awkward glances and unspoken words that carry so much meaning. To combine it with the format of a ghost story brings fear and love, two of the most powerful, universal emotions, together.

Much of Hide’s success comes from Neil Cross’s fine script, which makes a much better case for his involvement in the series than his previous episode, The Rings of Akhaten. That script began with a love story, and then drops the protagonists, proceeded  tell us another story else entirely, only telling us how great the characters were in the final scenes. Hide shows us, letting us get to know Alec and Emma through their actions and reactions to one another, creating two very believable characters who centre the story. It’s easy to see how Cross got another commission on the strength of this script, written before Rings. 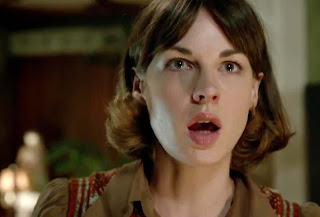 Of course, the script is nothing without decent acting and direction to bring it to life. Jessica  Raine and Dougray Scott are both excellent here, making Emma and Alec into  fully formed individuals. Between script and performance, Emma and Alec feel more real than any other character we’ve met so far this year, including Clara, now on her fourth episode and still feeling a little sketched in, in spite of some nice character moments and a fine performance by Coleman. Part of this is down to Raine and Scott’s acting style; both give very naturalistic performances that contrast well with the more stylised take by both Coleman, and moreso, Matt Smith. The contrast helps make Emma and Alec feel like part of the world, while the Doctor and Clara are clearly interlopers.

Which isn’t to say that either Smith or Coleman let the side down here. They are both on top form throughout, with Smith giving a particularly sharp performance in the episode’s quieter moments. The one standout scene for the two leads, when the Doctor takes the TARDIS on a trip through the Earth’s entire history, plants them firmly at opposite ends of the human experience, the (apparently) ordinary young woman and the ancient, alien outsider. Smith makes the Doctor’s discomfort with, and distance from, human emotion very clear, helped no little by Cross, who really seems to get this version of the Doctor.

What’s most satisfying about the Doctor’s experiences in this episode is that we finally see him genuinely frightened and out of his depth. He begins as his usual, supremely confident self, his boundless enthusiasm rubbing off on Clara (hence their cheeky introduction as “Ghostbusters!”) Clara is the first to get spooked out, but the Doctor has further to fall, and Smith portrays two distinct stages of fear. He freaks out during the wailing woman’s manifestation, and is clearly affected by the experience, admitting that he thought investigating her would be fun. Even then he’s working things out, and is on the case, using his vast knowledge to ascertain just what, and who, the witch of the well really is. In some ways, it’s a shame that there had to be a science fictional explanation for the Caliburn Ghast. It was inevitable that the Doctor would explain events away in a non-supernatural fashion, but it would have been satisfying to see him faced with something inexplicable for once. The only other time I can recall the Doctor truly afraid and baffled was in Midnight, an episode that has yet to be bettered in terms of a traumatic personal experience for the Doctor.


Still, the rationalisation of the ghost – a time-traveller, caught in a pocket universe, stretching three minutes out over billions of years – is an inventive take on the “time-slip” theory of hauntings. It’s once the Doctor arrives in that pocket world – beautifully visualised in a washed out palette and subtle CGI – that he enters his second stage of fear. Having rescued Hila the time-travelling pioneer, he is left trapped, faced with a threat that is totally unknown and no way out. The jingoistic “I am the Doctor!” speech from Akhaten seems more effective in retrospective when we hear it inverted to become “I am the Doctor, and I am afraid.” He still has bravado to fall back on, but it rings rather hollow this time. 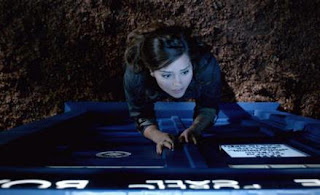 Of course, he is rescued, and the use of the TARDIS works better than it has any right to. Using the TARDIS as a means of rescue or escape always risks seeming like a “Get out of jail free” card, but here it works by furthering the intriguing relationship between Clara and the time machine. If anyone suffers from too little characterisation out of the four characters – not including Kemi-Bo Jacobs, who gets little to do as Hila – then it’s Clara. She is very much in generic companion mode here, despite some nice moments, with her characterisation being mostly subsumed in favour of the ongoing mystery surrounding her existence, notwithstanding the aforementioned “Going always” faceoff. Thankfully, Coleman is good enough to inject life into the character with even slim material to work from.

The four cast members each get to play off each other in various different pairings, although while Smith and Scott get a meaty conversation about wartime ethics and the nature of life and death, Raine and Coleman get to talk about the boys and be a bit lovey-dovey. It’s a sweet scene, but it does rather tragically fail the Bechdel test.

The pacing of the episode is odd, but effective, gaining in urgency as the nature of the problem becomes apparent, moving from the slow burn of the early moments to the frenetic action of the conclusion. Or rather, the beginnings of a conclusion. Cross is brave enough to leave the episode unfinished, changing the parameters yet again, revealing that the Crooked Man is merely searching for his mate, and had never broken through to our world in the first place. A whole extra strand of the adventure is set up, and left for us to imagine ourselves; actually depicting it is entirely unnecessary. After forty-five minutes of beautiful performances, decent writing, and nerve-wracking direction from Jaimie Payne, this clever, confident episode come not to a close, but an opening. 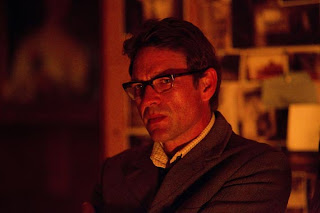 The History of the Earth: There’s a fabulous scientific howler in this episode, when the Doctor claims he’s just visited the site of the house about six billion years early. Current scientific consensus is that the Earth is a comparatively modest 4.6 billion years old.

Monster Monster Monster! The Crooked Man (named only in the end credits) and his mate go entirely unexplained. The actor beneath the latex seems to think, in the “confidential” featurette, that he is someone who has been trapped in the pocket universe and warped by it, which is as good an explanation as any. One unsolved mystery can be accepted after answering the question of the Calibrun Ghast. It’s a very interesting design, made all the more unsettling by some clever camera work. Face-to-face it’s less threatening, but then, by that stage, it’s supposed to be.

Links and References: Abundant. The Doctor’s orange spacesuit is the one he picked up in The Satan Pit, and later wore in The Waters of Mars. He used a “subset of the Eye of Harmony” to open the wormhole, although quite what this implies post-Gallifrey is anyone’s guess; it doesn’t look like he’s got a bit of black hole there or anything. The Doctor only notices in this episode that the hat stand present in the console room since 2005 is not there in the new version.

The blue crystal used to focus Emma’s abilities is from Metebelis 3; there’s predictably been some debate concerning Matt Smith’s pronunciation of the planet’s name. Quite a few of his pronunciations seem a bit off to my ears though, but I guess that’s just regional variations. The Doctor previously used a piece of Metebelis crystal in a similar fashion in Planet of the Spiders; considering that experiment led to the psychic subject’s death, and that returning the crystal led to the Doctor’s regeneration, you’d think he’d have left the stuff well alone. The psychochronograph might be a reference to Dr. Philip Sandifer’s TARDIS Eruditorum, which he describes as “A Psychochronography in Blue.”

Apart from the Ghostbusters reference, the whole scene with the Doctor abseiling through the wormhole, with Emma shouting his name into the light, screams Poltergeist. Did anyone else shout “Carole Anne!?” According to Neil Cross in an interview with SFX, Alec Palmer was originally intended to be none other than Professor Quatermass, but rights issues intervened.

Hanky-Panky in the TARDIS: Jessica Raine is quite irresistibly cute in her 70s blouse and pullover. Dougray Scott is, as ever, a very handsome man. Jenna-Louise Coleman continues to make my heart skip a beat every time she smiles.

Best Line: “Every lonely monster needs a companion.” The Doctor speaks from experience.