Blimey, it's been a fortnight since First Contact Day and I've finally gotten round to posting my thoughts on the new trailers and info. Better late than never, I guess.

Discovery season four sees the crew, now under the command of Captain Michael Burnham, confronted with some kind of gravitational disaster that is threatening everyone and everything. They've only just solved the mystery of the Burn and now they're dealing with another cosmic crisis that threatens the whole galaxy – give these poor people a week off! It seems that S4 will carry on in much the same vein as S3, trying to rebuild the Federation while space travel, even space itself, is falling apart. I'd hoped for a bit more, well, discovery in this season, and we might still get that, but the trailer makes it look like we'll mostly be seeing places and people we recognise.
I'm loving the colourful new uniforms, much better than the dreary grey ones the Disconauts ended up at the end of last season, although it reinforces the impression that Starfleet spends most of its time designing clothes for its officers. Clearly Book and Saru are to remain important in the series. Detmer also gets a bit of focus in the trailer, but that might just be because she's so hot. We see some hints here that the Vulcans are mending their relationship with the Federation, with the President of Ni'Var making some positive speeches, and we also see someone in authority in the Federation itself – perhaps the Federation President, oft-mentioned but unseen in S3? She appears to be part-Cardassian, which hints again that the Cardassians joined the UFP at some point between the 24th and 32nd centuries.
PICARD SEASON 2
The Picard teaser really is just that, just enough to tell us that Q is back. Initially released without the interview, this was a nice surprise – well, not a huge surprise, but a nice revelation. I can't wait to see how Picard and Q interact in this new era, with Picard's age, more cynical attitude and new status as an artificial being surely changing the dynamic. (I presume that John de Lancie's physical age will be explained as a conceit for Picard, or perhaps a mockery.)
Picard S2 has a lot to cover. The first season gave us the rights of artificial life forms, the repurcussions of the Romulan supernova, the fallout of the Borg incursion into known space, and didn't always manage to balance it all. S2 has to follow up on all this, plus Picard's new incarnation and the return of Q. That's a lot to fit in (and I still want to see them explore the rights of holograms in this era, and how it relates to the ban on artificial life). It's good to read that the showrunners have accepted there were pacing and writing issues in the first season, and that they have planned out more fully were the story is going this year. I'm ultimately just glad we're seeing the series return, especially seeing how production was stopped for a while due to COVID (Patrick Stewart being an elderly man, after all).
We also know that Whoopi Goldberg is back as Guinan (and with Q as well – will we learn about their mysterious past encounters?), and there are persistent rumours of Robert Picardo joining as the Doctor. One interesting aside from the teaser is the inclusion of a sacred Bajoran relic among Picard's collection of cool galactic stuff – just a reused bit of set dressing, or a hint at something more intriguing?
LOWER DECKS SEASON 2

Life seems to be carrying on as normal for Lower Decks, which is to say, utter chaos and monsters (there's a mugato! Sweet!) A well as a bunch of new bizarre creatures, we're meeting both the Cardassians and Denobulans again (about time). Plenty more references to the franchise, as expected – a Miranda-class starship like the classic Reliant, seemingly plucked from the 23rd century; Mariner picking up Riker's ultimate martial arts skills, Riker banging on about jazz as always. It looks like life's more stressful than ever for Bradward Boimler, as we might have predicted. And we only have until August to see it!

Strangely, we haven't had any footage from either Strange New Worlds or Prodigy, even though the former has begun filming in earnest and the latter is supposedly landing later this year. A general trailer released about a month ago recycled footage from Discovery S2 and Short Treks to represent SNW, while all we'e had from Prodigy is some artwork of the characters. Still, what we've seen and heard is intriguing.

I'm relieved to read that showrunner Akiva Goldsman is making SNW more episodic than the other series he's overseeing. Not because I dislike the serialised structure, but because it's something a little different, and suggests we'll be doing more standalone adventures on those strange new worlds of the title. He's particularly spoken about having tonally different episodes following each other, which will be a refreshing change from the more holistically styled series we've had recently. It sounds like the series is deliberately being set up to be more like classic Trek and there's nothing wrong with a bit of that amongst today's modern storytelling. 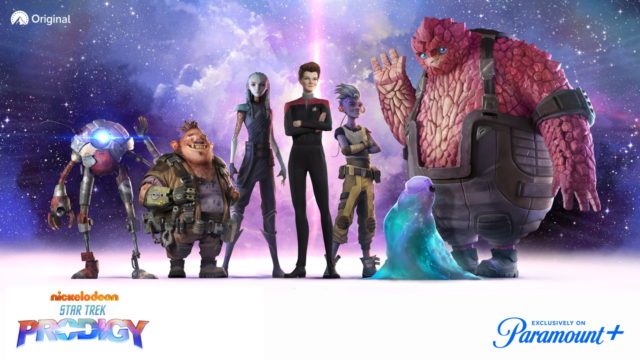 Prodigy is sounding more interesting the more we hear about it. Given that it's designed for younger viewers, new to the franchise, I expected it to be very standalone. From the sounds of it, it both is and isn't. The main characters (bar one) appear to be entirely new alien species (there's one who might be a Talaxian, but it's hard to be sure with the art style). Yet it's being positioned as a follow-up to Voyager: set in the Delta Quadrant in 2383 (five years after Voyager finished, three years on from Lower Decks and four years before Romulus gets destroyed, fact fans), it features an Emergency Training Hologram based on Captain Janeway.

This is a really interesting way to bring back her character, rather than simply having an older Admiral Janeway getting involved. I'm also glad to hear that Kate Mulgrew asked the artists to tone down the prettiness of her holographic image. She's still quite prettified, which makes me imagine the original design must have been like something out of a Disney film. But look at those aliens! One of them is a blob! A proper blob monster like Yaphet on The Orville. I'm stoked for a modern kids' adventure series take on Trek, and having a whole bunch of new aliens as main characters is the icing on the cake.

And finally... Paramount have confirmed that there's going to be a new Star Trek film in 2023. I mean, don't hold your breath for them to actually make that date, what with all the to-ing nad fro-ing on the movie front the last few years, but it's still encouraging. It's stated it'll be produced by J.J. Abrams, so I would expect it'll be another Kelvin Timeline film, but frankly, who can be sure? Kurtzam has also said that the line between the film and TV franchises is now gone (thanks to CBS and Paramount now making friends again), but given they were literally in separate universes before it's a mystery how this will actually work.