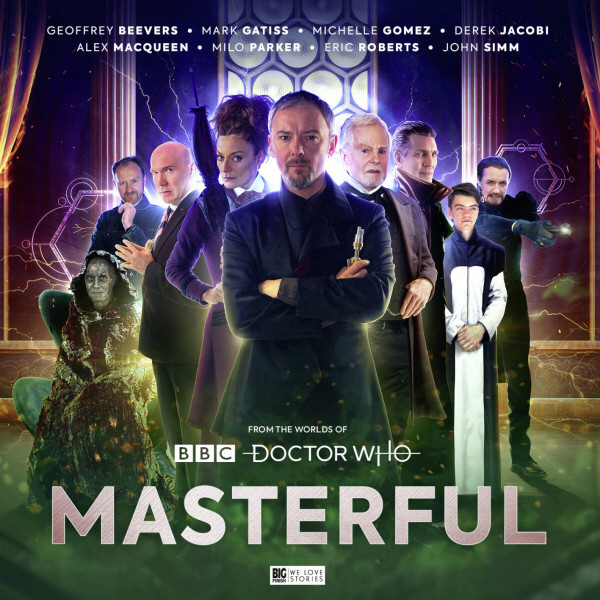 Finally got round to getting the special Big Finish release Masterful, released in January to celebrate the fiftieth anniversary of the Master's first appearance in Terror of the Autons in 1971. And a special it is – a three-hour extravaganza featuring no fewer than ten iterations of the Master, with five actors reprising their roles as the archvillain from TV, including the first ever appearance of John Simm as the Harold Saxon incarnation in a BF audio.

Following The Two Masters a few years ago and then the first double-Master story on TV with "Twice Upon a Time"/"The Doctor Falls," BF have gone a bit Master-mad lately, with multiple incarnations turning up in Doctor Who audios, The Diary of River Song and more. Before Simm, they managed to get Sir Derek Jacobi and Michelle Gomez back on board with their own series, and even sorted out the remaining rights issues that let them bring Eric Roberts onboard as the TV Movie incarnation of the villain (with his own box set just released as I write this). I haven't listened to all of these (money and time being something of a stumbling block when it comes to BF's gargantuan output) but it's hard to see how they could outo Masterful for sheer Masterly magnificence. There's a lot of Masters here so I'm going to go with Tumblr-style notation to tell them apart.

The basic idea is that Simm!Master invites as many of his past incarnations as he can reach to his big evil castle on his own planet at the edge of the universe, to announce that he's conquered reality and finally killed the Doctor (intriguingly, both he and Missy are familiar with the Thirteenth Doctor). He is joined by the incarnations played by Geoffrey Beevers (the crispy Master), Alexander Macqueen (BF's own resurrected Master), Roberts!Master, Jacobi's War Master, the Ainley!Master and even a teenaged incarnation, seemingly the very first, pre-regeneration iteration of the character, played by newcomer Milo Parker. Presumably this is an older version of the child Master we saw played by the William Hughes in "The Sound of Drums," who died tragically 2018, and will one day grow up to become the alleged "First Master" played previously for BF by James Dreyfus (notable by his absence since BF has ditched him for extreme TERFiness). Into this crashes Missy, who was very specifically not invited.

If you think the Doctor's incarnations rub each other up the wrong way, then sit down for the Master's inter-regenerational bitching. The character is so fuelled by a combination of arrogance and self-loathing that the different incarnations simply can't stand each other, and can't be trusted to not kill off their own past and future selves, regardless of the temporal paradoxes this would ensue. Notably, young Milo!Master, who has dreams of stamping his power-mad ideals on the universe, can't believe his future selves' callous disregard to life; the earlier Masters are all horrified by Simm!Master's sheer vicious brutality; and all the male Masters are utterly embarrassed by Missy, likening her to a "drunken aunt at a wedding," while Missy claims she's simply the first one to admit she'd mad and start enjoying it. Simm!Master is particularly furious to see Missy there, since he now thinks he's at the pinnacle of his existence and doesn't need to ever become her.

Things rapidly become more complicated. The Roger Delgado incarnation – the original, you might say – is conspicuously absent, which is a bizarre move in a production designed to celebrate his beginning this enduring character. I understand the deluxe version of this release includes a special audiobook featuring his incarnation, Terror of the Master, but his absence is sorely felt. Storywise, though, it's because he's just smarter and more cautious than most the others, and when the time scoop comes for him, he pushes Jo Grant in there instead. It then turns out that the Ainley!Master actually sent Kamelion in his place. When that lunatic is more cautiously sensible than you are, you've really got to rethink your approach. In both Kamelion and Master form he's voiced by John Sessions, who varies from parodic to spot-on depending on the line, but Ainley!Master really isn't all that important to things as they go on.

Of course, you should never trust the Master even if you're the Master, and it turns out that Simm!Master, in his desperation, has nearly destroyed the entire universe and almost killed himself in the process, and has brought his earlier selves here to feed on their regenerative energies. This is a bit of a fool's errand considering several of them are squatting in stolen bodies, or falling apart altogether, and will of course create universe-threatening paradoxes, but with reality falling apart anyway I don't suppose it matters. Missy takes control of both Kamelion and the time scoop and scatters everyone throughout time and space (although it turns out they're all in a fairly small area of chaos created by Simm!Master's machinations).

The success of this story is all in the interplay of the characters and iterations of said characters. For the most part, the Masters are paired off, but each thread treats them differently. The most effective, for me, was the thread following Beevers!Master. I'm not entirely certain where in his timeline this is intended to be – it could be the original incarnation between Delgado and Ainley, or a reverted version from after Ainley or even after Roberts – but it doesn't really matter. Beevers!Master finds himself stranded on a world almost abandoned, somehow fitted with a perception filter which gives him a normal, even handsome appearance and dulls the pain of his viciously injured body. He meets a woman named Kitty (Abigail McKern) who has her own secrets, but the two settle down together at her house and develop a real rapport that slowly develops towards love. Beevers gives an incredible performance that really makes you feel for this most sadistic of Master's, and makes it clear that his cruelty is his lashing out at a universe that has inflicted such terrible pain on him. It's a similar story to the seminal BF release Master, but with the addition that the Master knows exactly who he is and what he'll be going back to if he leaves. It's absolutely heartbreaking. Plus he calls himself Jeremy, which is hilarious. Into this precarious situation comes the Roberts!Master, slinking around and whispering seductively to Kitty, doing his best to gently turn her against his other self. It's a subtle performance by Roberts and one that makes me look forward to hearing more of him returning to his movie character.

Meanwhile, the Macqueen!Master finds himself in a desperate situation on a colony ship that's lost its way and is running dangerously low on food. It's great to his this camp smooth-talker again, after far too long an absence from BF, as he tries to turn things to his advantage but continually finds events working against him. It turns out the captain of the ship is the Milo!Master, and the two end up in a game against each other, trying to get and keep control of the ship – and it turns out that Macqueen!Master's more ruthless approach may actually be the best thing in the long run. The War Master and Simm!Master are forced to team up in a "Gridlock"-styled world that has been devastated by Simm!Master's interference. The interplay between the two successive incarnations – who amusingly start referring to each other as "dad" and "son" – is brilliant, with the War Master particularly disgusted by his near-feral future self. The War Master has been characterised by BF as the most sophisticated, and most humane of all the incarnations, which makes his turning to violence all the more disturbing when it happens. In comparison, Simm!Master seems barely in control of himself.

It's appropriate that of all the companion characters who could be included in this story, Jo Grant was chosen. She was, after all, there at the beginning of the Master's story in 1971. Katy Manning is always a treat to listen to, and she pairs up well with Culshaw's Kamelion, who takes the form of the Third Doctor for a time, giving the Doctor a presence in the story without actually involving them. Better, though, is later in the story when Jo teams up with Missy. It's a similar pseudo-companion relationship to Missy and Clara in "The Witch's Familiar," with the added element of a lot of history between the characters. Jo spends much of the time trying to get Missy to admit that, in spite of their enmity, she and the Delgado!Master were quite fond of each other, and that maybe there's something decent under the surface of the Master's angry and controlling demeanour.

Alongside all this is a side story with Mark Gatiss returning as the Unbound Master, happily ruling his own little universe and popping over to make sure the devastation sweeping the primary universe doesn't infect his own. His suave incarnation has some lovely, albeit rather incestuous interplay with Missy, and he begins by pretending to be the Doctor (something the Master seems to enjoy throughout his incarnations). He ends up saddled with Kamelion, but his storyline doesn't fully resolve or intersect with the rest so is a bit wasted. There's also an inevitable, but ultimately rather pointless, cameo by Gina McKee as the Lumiat, Missy's goodie-goodie successor.

While it's made by the bitchy interaction between different versions of the Master, who are considerably more different than each other than the Doctor's regenerations, there's a deeper story here. The Master's self-hatred becomes all the more apparent as the various incarnations turn on each other, with Missy's eventual revelation that she manipulated events so that her other selves had the opportunity to redeem themselves tying into this nicely. While this has to be before her redemption arc on the series proper, it's clear that Missy is already beginning to wonder if there's something more to her existence than evil and ambition. Combined with the revelations of the nature of the wave of destruction sweeping the universe, though, this makes the Master a tragic figure, doomed to play out the same pointless, self-destructive patterns of behaviour throughout their lives, never to find peace. While it's contractually impossible for BF to use the current Dhawan!Master, his reverting to furious evil and the seeming death wish he displays follow on perfectly from where we leave Missy at Masterful's catastrophic outcome. Inevitably this entire story disappears up its own paradox, being written out of reality like a time-travelling episode of Star Trek: Voyager, but the examination of its central character still hold. You'll come away feeling rather sorry for the old bastard.