WHO REVIEW ROUND-UP: The Gates of Hell (Out of Time 2)

The first volume in the Out of Time trilogy gave us the irresistible team-up of Tom Baker and David Tennant. Now we get something we've seen before: Tennant teaming up with Peter Davison. The last time, way back in autumn 2008 (which seems like yesterday but was actually almost thirteen ruddy years ago), there was a wonderful frisson from having Tennant meet his favourite Doctor on screen. In "Time Crash" Tennant was clearly sharing the screen with his hero, remaking his role as his own and paying tribute to it (along with a script from Steven Moffat, who also cites Davison as his favourite Doctor). Now, though, there's even more of a buzz to it: for the first time, father-in-law and son-in-law share a Doctor Who adventure playing their own versions of the same character.

As such, there's a different feel to The Gates of Hell than to "Time Crash." This is two men who know each other well, playing off each other in a familiar, comfortable way. Both are, by now, so well established as their Doctors that they slip effortlessly into the roles. It all feels terribly cosy.

Nonetheless, this is a better story than Out of Time. David Llewellyn provides a gripping script that utilises the Cybermen effectively (and after the Daleks last time, it was inevitably going to be the Cybermen). The Cybermen are basically a technological version of the living dead, so putting them in a crypt - the catacombs beneath Paris - just works, the same way that having them stomp through graveyards in "The Next Doctor" worked, or having them emerge from graves in "Death in Heaven" did. Cleverly, he uses the two Doctors overlapping timelines as a threat, rather than an awkward social situation, with the collision of two timestreams destabilising history and allowing the Cybermen to rework history to their own design. We end up exploring Paris in various periods of history, from the 14th century to the French resistance, as the Doctors try to undo the damage to the timeline.

Llewellyn's not afraid to chuck in a few fanwanky references. It's fun that the two Doctors remember meeting each other in "Time Crash," and, being in Paris, we could expect the Doctor to reminisce about visiting the city with Romana. I wasn't expecting the Fifth Doctor to mention his previous self's visit to the catacombs in the comic series The Forgotten, though.

The guest cast in this one are very good, with Mark Gatiss putting in an insidious turn as the villainous Joseph Delon. Glen McReady does a fine job as both his father Marcel and King Charles the Mad. With Gatiss being one of the core group of Doctor Who writers and performers, both for Big Finish and on television, and McCready being a prolific BF semi-regular, it's a bit of an inside gig and a boy's club - and that's before you factor in Nick Briggs, the company's director, once again voicing the monsters. Thank goodness, then, that we have one significant female guest role, and someone pretty new in the role. Shelley Conn has been in one BF release before - Situtation Vacant, eleven years ago - but by BF standards that's practically unheard. Her character, time agent Tina Drake, makes a very likeable pseudo-companion. The only thing that was slightly off-putting was her faux-American accent - not because it was particularly bad, but because it sounds almost exactly like Nicola Bryant's in some scenes, and when the episode opened I just assumed Peri was travelling with the Doctor.

Altogether, a solid bit of Cyber-action, livened up by the interplay between the two Doctors. 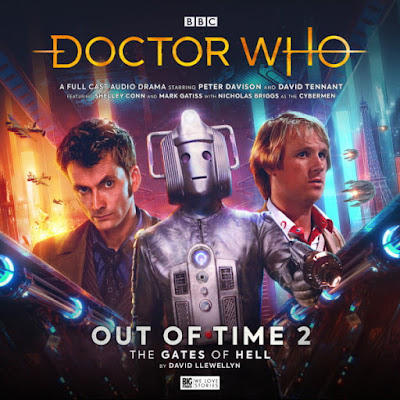 Placement: Both Doctors are travelling alone, and both remember the events of "Time Crash." The Tenth Doctor seems to imply this wasn't too long ago for him, so probably between "Voyage of the Damned" and "Partners in Crime." Finding any alone time for the Fifth Doctor is a challenge, but The Compleat Adventures suggest a gap between The Awakening and Frontios where these stories can happen and that'll do (unless the Doctor really does bugger off for years while he's meant to be dropping off the Gravis).