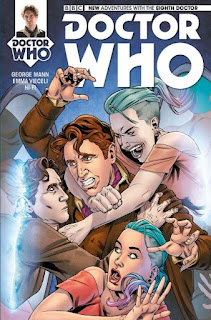 A MATTER OF LIFE AND DEATH

Titan Comics' 2016 miniseries featuring the Eighth Doctor, collected here under the umbrella title A Matter of Life and Death, is a punchy five-part run of short adventures that make up a single overarching quest. The Doctor pops to one of his various properties on Earth, this one seemingly the cottage he used in the TV Action comic strips from the 70s, absorbing a fragment of these almost-certainly apocryphal stories into the modern day ongoing franchise. As questionable as some of the earlier Doctor Who comics were, it's wonderful to think that there's been a pretty much continuous run of strips since 1964 across multiple publishers.

Entering his cottage he discovers that a young woman has taken up residence there. This is the beautiful blue-haired Josie Day, an artist who somehow knows to paint alien beings like Krotons and Cybermen and seems reluctant to answer questions. "The Pictures of Josephine Day" is a fun beginning for the series, with living paintings besieging a sleepy village, while setting up a central mystery. Josie clearly knows more than she's letting on, but it's subtly written and illustrated and only becomes truly evident rereading once the story is fully played out.

The second issue, "Music of the Spherions" is my least favourite story of the run, with a pretty hokey central story about infectious sentient crystals, but it has a strong and noble central message and shows just how good a companion Josie is, saving the day through impassioned speeches and a willing to sacrifice herself if necessary. Josie's fun and arty but deep and serious at the same time. The story shows off Vieceli's artwork at its best, though, with some impressive alien vistas. Her Eighth Doctor is neither a realistic depiction of McGann nor a caricature, rather an impression of the character, always recognisable as this passionate, flighty regeneration.

"The Silvering" riffs on "The Unquiet dead" and The Talons of Weng-Chiang with a trip back to the 19th century and a night out at the theatre, where some very spooky going-ons are going on. Featuring mirrors that act as portals into a nightmarish parallel universe, it's not exactly original but it's atmospheric and exciting. The best moments involve mirror-soldiers, created from glimpses and part-reflections, horrible, tragic fractured beings. Lovely stuff.

"Briarwood" sees the Doctor and Josie attend a marvellous party at a fancy house in 1932, where there's a touch of Christie-style mystery and some sinister plant elementals to deal with. Oddly Mann names these the Nixi, whereas the folkloric nixies were water spirits, not tree spirits like the dryads. It's a solid adventure with a more meaningful resolution than I'd have expected.

The series finishes with "A Matter of Life and Death" itself (not to be confused with the Eighth Doctor comic story "A Life of Matter and Death," from DWM). Again, this seems to be riffing on existing Doctor Who stories, but with a new twist that answers the questions of the series and the Doctor's shopping list of missions in an "Ah, of course, how obvious!" way. It's all painted out for us to see throughout and yet it's so wonderfully easy to miss. And the revelation of the ultimate mastermind of the story is rather fun as well.

Placement: By the Doctor's appearance, this is clearly the Time War era, which is to say the modern iteration of the Eighth Doctor who seems to be the default version since 2013. More pertinently, the Doctor's dialogue reveals someone utterly exhausted by the constant shadow of war, but he still remains the recognisably enthusiastic, occasionally bouncy Number Eight. So this is likely early on in the Time War, before things have really started to threaten everything.

Highlight for a spoiler: for the Twelfth Doctor and Clara, likely between series eight and nine.