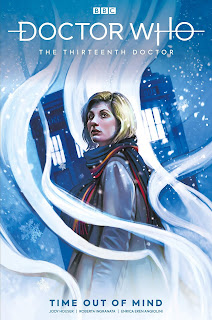 Catching up with the Thirteenth Doctor comics from Titan (now the only place to enjoy an ongoig graphic adventure for the current incarnation, since DWM sadly stopped their regular strip feature) brings us to this interim volume, which collects the 2109 Free Comic Book Day release (which I missed) and the two-issue Holiday Special from the same year. As with the whole run, it's all written by Jodie Houser, who ansolutely nails the character of the Thirteenth Doctor and makes the fam work with a real light touch.

The FCBD issue (apparently titled “Meet the Fam!”) is a fun little side trip, bringing the TARDIS to an alien amusement park where Graham manages to get himself abducted by losing a game of space coconuts. It's silly, fun, and a bit throwaway, with some lovely artwork (including a double-page spread by a guest artist), but ends on a sinister. Each of the time travellers remembers a different version of events at the theme park, and can't even recall what planet it was on. Actually reading on release there would have been months between this cliffhanger and finding out the resolution, but as it is, we can steamroller on ahead the the Holiday Special.

It was a canny move releasing this as a Christmas story, given that the Thirteenth Doctor still hasn't had one on TV and that 2019 was especically bereft of screen adventures for the Doctor. This sees the Doctor and her gang follow a brief trail to a frozen world where it seems that Father Christmas is causing trouble – except his name is actually not Santa, but Mr. Henderson, who seems to be some kind of evil anti-Santa, with a platoon of toy soldiers to do his bidding.

You can see where this is going, right? Mr. Henderson is in fact the Krampus (or at least, a Krampus – there have been several takes on the Yuletide monster since in Doctor Who comic and audios since he became popular in the English-speaking world). Also, this Krampus is a she, and why not indeed? As well as answering who's been messing with Team TARDIS' memories, this is very fun festive adventure that ties in playfully with other takes on the Father Christmas idea seen on the TV series. To begin with there are tiny elf-like aliens, before an honest-to-goodness elf named Baxter turns up, very much like the ones seen on “Last Christmas.” The Doctor never gives a definitive answer as to whether Santa is real (just as in that episode), and both she and Baxter refer to him as Jeff, the very name the Eleventh Doctor claimed to know him as in “A Christmas Carol.”

There are no big revelations in this slim trade collection, no world-shattering events, no crossovers. Just a couple of solidly enjoyable imaginative stories, and that's exactly what it needs to be.

Placement: The Doctor wears her fez, so it's after Kerblam! but more notably, Ryan mentions the Corsair, so it's after Old Friends. There's nothing to suggest this entire run of comics doesn't take place in the gap between Resolution and Spyfall.