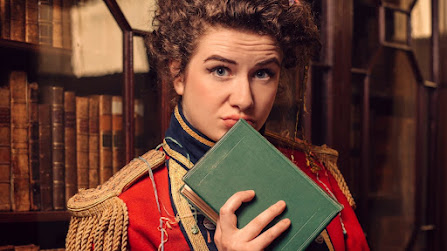 On Friday night, the missus and I were at the end of a nice day out in the Smoke and decided to stop by one of those ticket kiosks that dot the West End to see if we could grab a last-minute theatre ticket. It was Black Friday, after all, so there was bound to be some fantastic bargain out there.

It turned out a lot of people had the same idea, so there weren't very many affordable seats left – at least, not together, and we didn't really want to sit at opposite ends of the theatre. There were plenty of shows on we'd heard of, but they were mostly very pricey, and anyway, the whole point of a last-minute ticket is to try something unexpected.

So, we ended up getting tickets to Pride & Prejudice* (*sort of) at the Criterion Theatre in Piccadilly. We'd not heard of this one; I mean, we'd heard of Pride and Prejudice. Suzanne has even read it. An all-female, OTT-comedy take on the 1813 novel, it sounded like our sort of thing. We thought it would be a laugh, but didn't expect anything, well, special. What we got was an absolutely brilliant show, one of the best evenings we've had at the theatre in years.

The fact that I'm not particularly into the works of Austen probably accounts for this play completely passing me by since it premiered at the Tron in Glasgow in 2018. It started its UK tour in late 2019, before getting stalled by the pandemic in 2020 just like everything else. Restarting in October this year, it deserves to be a monster hit. Written by, co-directed by and co-starring Isobel McArthur, it updates the satire of the original novel into a raucous, foul-mouthed and flamboyant modern take. It's a hotch-potch of anachronisms – the characters can't quite seem to decide if its the 18th century or the 21st – but this only adds to the air of chaotic fun.

The five members of the cast each play one of the serving staff who work uncelebrated in Austen's world, themselves reenacting the story by taking on various roles. McArthur herself portrays both Mrs Bennett (who sounds exactly like Blackadder the Third's Mrs Miggins) and a very dashing Mr Darcy. Meghan Tyler is a boisterously Irish Elizabeth, dominating her scenes. Christina Gordon spends most of the play as Jane, but also gives us hilarious performances as Lady Catherine and Mr Wickham. Hannah Jarrett-Scott is both the Bingley siblings, Charlotte and the main servant character, Tilly. Tori Burgess rounds out the cast as two of the remaining Bennett sisters. With whip-fast costume changes and a variety of accents, the actors jump between roles with aplomb.

The direction and choreography are spot-on, with perfect timing and positioning making for precise physical comedy, complementing a tight and fantastically funny script. Anacronistic props add comedy to a minimalist but cleverly constructed set, with the biggest laugh of the night going to the filthy skip wheeled in, emblazoned with the legend “JANE AUST-BIN.” Most of the jokes are smarter than that, but who doesn't love a shocking pun?

There are songs, but it's not a musical – more of a karaoke theatre experience. The multi-talented cast sing and perform all manner of instruments, giving us songs from everyone from Elvis Costello and Pulp to Bonnie Tyler, and even some Divine Comedy. It's practically my playlist, with the notable exception of the works of Master Christopher de Bourgh. The second half tones down the comedy a little, bringing in the feels for a beautiful finale.

With an incredibly talented cast and fantastic comic writing, Pride & Prejudice* (*sort of) is a brilliant, touching and absurd take on one of the greats of literary fiction. It might even get me to read the book.