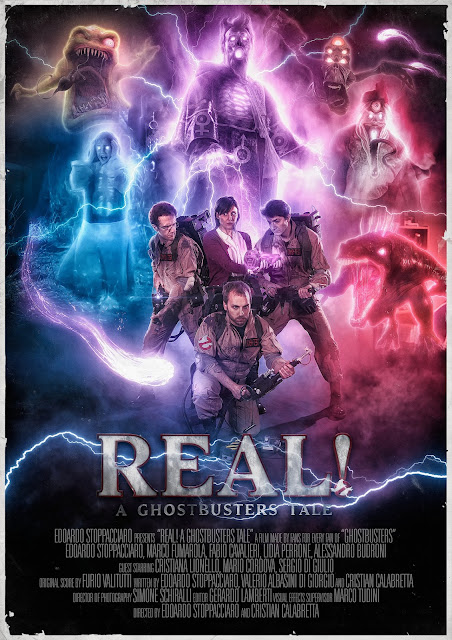 It's under a week until the international release of Ghostbusters: Afterlife, the long-awaited return to the original Ghostbusters universe that began with that first film in 1984. If you can't wait to see some new Ghostbusters action, though, who you gonna call?

You're going to head over to YouTube, where REAL! A Ghostbusters Tale received its online release on, of course, Hallowe'en, some clever timing that the official Ghostbusters marketers seem to have missed. REAL! is a Ghostbusters fanfilm, and it's far from the first, however it is easily one of the best made fan productions I've seen, in any fandom. REAL! is an Italian production, but don't worry, English subs are available if you're a cultural ignoramus like me. Eduardo Stoppacciaro is listed as creator and producer, stars in the film and also directs alongside Christian Calabretta, who wrote the script with Valerio Albasini di Giorgio.

An Italian Ghostbusters film is a new thing, and wow, is this Italian! Set in Rome itself, the directors and cinematographer Simone Schiralli make the most of the iconic architecture as they set the scene. It gives the film a wholly different flavour to any Ghostbusters production before, but this still feels very much authentically Ghostbusters. Set in the same continuity as the original two films, REAL! has a contemporary setting and runs with the idea - used in Extreme Ghostbusters and the upcoming Afterlife - that spectral sightings dried up after the main events of the films. Now, events in Rome are opening the gateway again, leading to three gents from a local university to become embroiled in the spirit world when they rent a flat that turns out to be haunted.

Starring Marco Fumarola, Fabio Cavalieri alongside Stoppaccario, REAL! re-creates the set-up of the first film, but with new characters with their own dynamic. Stoppaccario plays Davide, and while he has something of the look of Egon, he's more of a charming jack-of-all-trades, and he gets the romantic subplot. Cavalieri is Simone, the spunky, sarky, overexcitable one of the group, while Fumarola is Ludovico, who's the mechanically-minded genius. Exposed to a horrible haunting, the trio contact Egon Spengler himself (voiced by Mario Cordova) who agrees to send them the specs of the 'busting equipment so they can build their own. Alongside the guys is Lidia Perrone as Susanna, the beautiful love interest who has secrets of her own, and Alessandro Budroni as the ultimate villain of the piece, the mystic Fulgenzio Ippolito Margano.

There are some fun nods to the silliness of the original. A favourite moment is the pointing out the miraculous engineering required to build a particle accelerator that fits on a backpack, as opposed to being several miles across as they are in reality. There's also a lovely mid-credits scene where the new 'busters recruit a secretary, played by Christiana Lionello, who must be a distant cousin of Janine Melnitz.

However, with a name like REAL! you'd be expecting some kind of riff on The Real Ghostbusters, the single best animated of all time, yes? And you'd be right. While the film is very much in the world of the original film, most of the ghosts are fantastic recreations of the spooks that made up the RGB toy line from Kenner. For anyone of my generation they're a wonderful burst of nostalgia - they even have a cameo by everyone's favourite, the Bug-Eye Ghost (Afterlife stole their idea!). It can't be understated how impressive the effects are in the film. The ghosts are wonderfully realised, with something of the style of the original film's spooks, something of the CGI ghouls of the 2016 movie, and something of their own. As well as the joyful inclusion of ghosts familiar from the toy range, some of the more original manifestations are genuinely pretty creepy.

With a script that's genuinely funny, a deliciously spooky threat, clever ideas, great direction and incredible effects, REAL! A Ghostbusters Tale is an excellent addition to the ever-growing and beloved world of ghostbusting.

You can watch the film for free here. Make sure you watch through the credits for some lovely treats for the fan community, too.