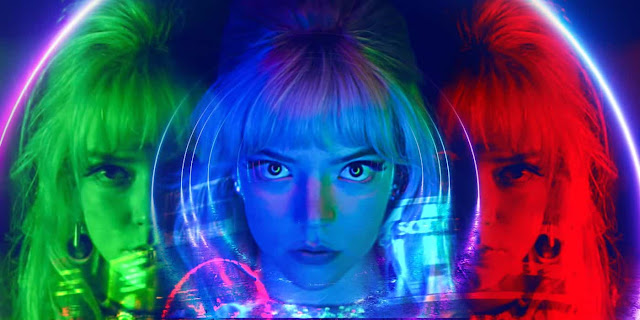 There are few directors who combine such a wit and visual invention as Edgar Wright, and his latest film takes him in a new direction, tackling a horror-thriller without the backing of comedy. The Cornetto Trilogy went further with violence and gore, but the jokes took off much of the edge. Last Night in Soho, although not without laughs, is a serious film tackling serious themes of abuse and exploitation.

In interviews, Wright talks about listening to his parents' record collection, listening to their stories of their youth in the sixties. Whereas this period is now fondly recalled in most popular media, Wright's recollections of his parents' stories paint a different picture, of harsher experiences. Films actually made in Britain in the sixties often show a darker, more dangerous side of the London experience. Last Night in Soho revives this genre, a look at the cruel and dirty side of the sixties acting as an antidote to the rose-tinted nostalgia of theme park history.

A contemporary setting puts the experience at a further remove, with heroine Ellie a generation-and-a-half further from the lived experience of the sixties than Wright himself. Thomasin McKenzie, a Kiwi doing a decent South Western accent (although the missus informs me she sounds far more Somerset than Cornish), is a hell of a find as Ellie. Embodying a real vulnerability but never weakness, Ellie's experience among the snobs and bullies of the London College of Fashion could break a less strong person even before the bizarre psychic experiences start.

One thing I love about this story is the complete lack of explanation given for Ellie's abilities. She's briefly mentioned as having “a gift,” and we share her visions of her late mother, but that's all. We're thrown into her unprompted memories and dreams of Sandie, building from the glamour and excitement of the sixties nostalgia to the abject horror of Soho's seedy underbelly. Anya Taylor-Joy is, as usual, absolutely captivating, combining real movie star beauty with powerful acting. Early plans had Taylor-Joy as Ellie, and while I don't doubt she could have played it beautifully, that just seems entirely the wrong aesthetic. She's the very picture of sixties glamour and optimism, and that makes her fall all the more powerful.

In the film surprisingly little is Matt Smith, but god, does he make an impact in his scenes. Dominating, sexy and frankly terrifying, as Sandie's lover-turned-pimp he is incredible. Rounding off the big-name cast are Terrence Stamp as one creepy old bastard and the late, great Diana Rigg in her last ever role, the harsh and damaged landlady of Ellie's bedsit. A striking newcomer is Michael Ajao as John, the gentle and caring fashion student who becomes Ellie's love interest. Definitely one to watch. Classy old hand Rita Tushingham makes the most of her scenes as Ellie's grandmother, while there are further clasy turns by Pauline McLynn and genuine sixties icon Margaret Nolan (also filming her last role). Another one to watch is Synnove Karlsen as the queen bitch Jocasta.

Events turn disturbing in both past and present, twisting into a murder mystery/ghost story. There's a decent twist, with the story leading us down the wrong path, but it's hardly the most difficult one to guess and most people will get there before the big reveal. We're teased into thinking that Smith's Jack is still at large in the present day, but by casting him and Taylor-Joy Wright has two actors with such distinctive looks it's impossible to have anyone convince as their older selves. This, oddly, works in the story's favour, better hiding the contemporary characters' identities. Still, the film isn't going to win any awards for shocking heel-turns.

What it deserves awards for is atmosphere, combining the look, feel and sound of the sixties with a genuinely unsettling dreamscape. As the more stylised world of Ellie's dreams encroaches on her waking life, McKenzie's naturalistic performance becoming more heightened as her link to Sandie becomes more powerful. Spectacular style combines with some exceptional performances to make this one of the most potent films I've seen in a long while.