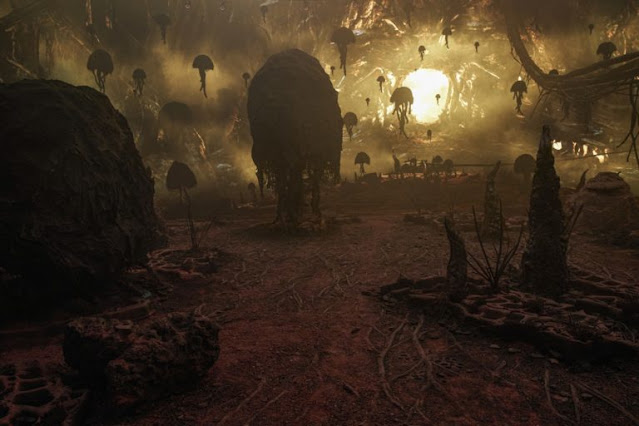 Catching up with my Disco reviews, and finally the season gets moving. I feel that this is probem with this season; the individual episodes are mostly good, but the overall pacing of the season is so slow that the arc plot never seems to go anywhere. In a truly episodic series this wouldn't be an issue, but when there's an ongoing mystery all this treading water is frustrating.

Still, at least now we're getting somewhere, having breached the Galactic Barrier and reached the 10-C's home star system. There's some proper sci-fi stuff here, as we enter a star system with one solitary planet, the rest having presumably been demolished to build the huge Dyson ring that is the sytem's main habitat. It's immediately clear that we're dealing with an incredibly advanced civilisation, who can create a structure like this and encase an entire system behind a forcefield. I just wish we got to see more of it.

Instead Burnham and co. go exploring on the planet, the lifeless core of a former gas giant. This is first time we've seen an environment like this on Trek – a Chthonian planet, unlike the many, many Earthlike worlds we usually see. The virtual sets have been an absolute triumph this year, bringing us some truly imaginative and remarkable worlds. I love the gigantic skeletons that litter the planet, and the concept of a people that leave chemical signs to signal emotions as markers for their dead. It's rare that we get something truly alien in Trek, and this is evocative stuff.

It's good to see Saru back in season one mode, showing us how much he's changed since the series began. Unlike back then, though, Saru's fear at “the coming of death” isn't something extrasensory. He's just the first person to inhale the hydrocarbons that the 10-C use to transmit emotions. It's a huge step forward, finding out how the aliens communicate, but you have to sympathise with Ndoye and the others when it comes to Burnham's attitude. Naturally, she's proven to be right in all this, but her pacing's as off as the series. This little excursion turns out to be the answer to contacting the 10-C, but it's bloody lucky that it worked. At first it seemed much more likely that the planet wasn't the 10-C's home, but their first victim, seeing that it was bombarded by asteroids just like the ones currently being flung towards the Earth by the DMA. It turns out that yes, the aliens have left this world alone, out of respect for their ancestors, but going for a walk around the graves of their children might not have gone down so well either. The Disco crew are lucky the 10-C's first message wasn't “You have desecrated the Tombworld!”

Meanwhile, Book and Tarka tread water, unable to actually do anything until they can follow Discovery into the hyperfield. As part of all this, though, we get some more depth for Ndoye, and after a long absence (due to health concerns around COVID), Tig Notaro is back as Jet Reno. I'm also becoming a big fan of Hiro Kanagawa as Dr. Hirai, the wonderfully blunt, perpetually snacking linguist. There are some good moments for Culber, Detmer and Stamets, but it's largely Saru and Burnham's episode. “Rosetta” works mostly for its ideas, but there are some nice character moments too. Mainly, though, it's good to be making progress, even if it is in fits and starts.