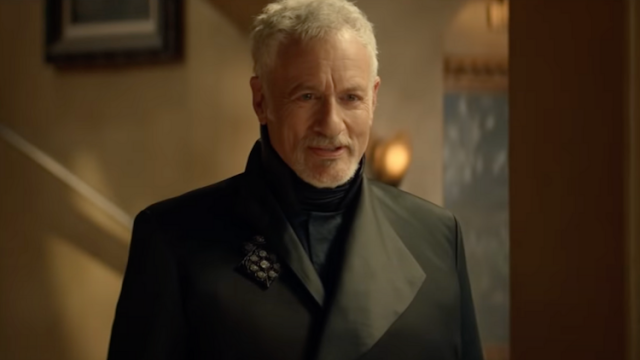 After quite the wait, Picard returns with a storming opening episode. While it's predictable in many ways, due to the main plot points being heavily trailed and the decision to open with an action-packed teaser that takes place in the episode's climactic moments, it's all done with such verve and flair that it's hard not to be swept up in it all.

In the eighteen months or so between seasons, we've reached the 25th century and Starfleet has forgiven all sins. Picard, Raffi and Rios are all back, with promotions and new positions. The venerable admiral is Chancellor of the Academy, Raffi has her own posting on the Excelsior and Rios is now captain of a brand new Stargazer. Meanwhile, Seven has taken La Sirena off his hands to continue her work for the Fenris Rangers, while Soji and Dr. Jurati have both been let off their frankly murderous ways on some pretty flimsy rationalisations (one wonders if Picard has been pulling some strings and bending the truth).

While they're all doing rather well for themselves professionally (Jurati's position as drunken master remaining entertaining but questionable), none of them are managing terribly well in their personal lives. Picard is too uncertain and stuck-in-his ways to allow a romance with his housekeeper Laris (and when Orla Brady comes on to you, you do not make excuses). Raffi and Seven don't appear to be seeign each other anymore, or it they are, it's very long-distance. Jurati and Rios have a tenuous friendship at best. At least we can rely on Guinan to sit down and talk sense to Picard – hopefully she'll have a chance to tell everyone off before the season's out.

The episode is actually rather slow, but punctuated by exciting bursts of action. In between there are very long talky segments, but the occasional exposition dump aside, the dialogue is entertaining enough to keep things moving (in both senses of the word). It helps that we have an absolutely top-notch cast delivering it. Nonetheless, it can't all be awkward chat about feelings: this is Star Trek, so there's an anomaly to explore.

Big swirling subspace anomalies are ten-a-penny in Trek, and it would be no surprise who's behind it even if we hadn't seen them attack in the opening moments. Green is the signature colour of the Borg, after all. Nonetheless, the Borg we meet here aren't quite like anything we've seen before. They ask for Picard by name, send their Queen (visibly unrecognisable) as an emissary, and claim to be interested in peace. The closest we've seen to this before is their tenuous alliance with Voyager, when Seven herself was sent as an emissary, and even then we couldn't trust them. Yet the Queen, even as she assmilated a fleet of starships, continues to only use stun setting with her weapons. Something interesting is going on here, but it doesn't look like we'll get to the bottom of it anytime soon.

Still, if this was Discovery, it would have been a month before we even saw the anomaly and another before we found out who was behind it. This episode introduces a spatial rift, pulls the Borg out of it, gives us both a mystery and a thrilling battle and then up-ends everything. While Q's appearance is, again, well-known to everyone coming in unless they've been very careful to avoid trailers, but it still packs a punch, largely down to John de Lancie's magnetic presence. Doubtless Q is in someway linked to the Borg event – who knows, perhaps this is what he was guiding everything towards when he flung the Enterprise-D into the path of that cube in “Q, Who.” Then again, given that they arrive through some kind of space/time rift, perhaps these Borg, in their bizarre ship, with their even more bizarre Queen, aren't from this timeline at all.

Whatever the answer, I can't wait for the next episode.

The gorgeous shot that pans out from Earth, across the solar system, into deep space and finally to the Borg rift, brings to mind the original title sequence of The Next Generation.

Elnor is lauded as the first fully Romulan cadet in Starfleet Academy. Simon Tarses, who was pilloried by Admiral Satie in TNG: “The Drumhead” was a quarter Romulan, but he both kept this secret and enlisted as a crewman rather than attending the Academy. Saavik was originally written as half-Romulan, but this never made it to the finished films.

Raritan IV, visited by Soji and Dr. Jurati, appears to be a Deltan colony. This is the first time we've seen the Deltans on screen since The Motion Picture, save a couple of barely visible cameos in subsequent films.

El-Aurians can age if they choose to, to make others feel comfortable. Q, of course, can appear how he likes on a whim.

The USS Stargazer NCC-82893 is a Sagan-class ship, apparently the first of its class. We also hear mention of a USS Hikaru Sulu, and according to info from the design crew, a USS Uhura. Ships making their live-action debut (if you can call it that when they're all CGI) include the Luna-class (from the novels and later Lower Decks) and the Ross, Reliant, Sutherland and Gagarin-class (from Star Trek Online).