WHO REVIEW ROUND-UP: The Wintertime Paradox 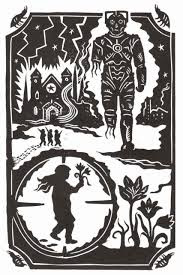 This an overdue review, given that this book came out in 2020 in the Christmas lead-up and I finally got it for Christmas '21, yet only now in March am I finding the time to sit down and review it. Which is negligent, because once I got this collection I read in a couple of days.

We've had plenty of Doctor Who short story collections over the years, many of which had overarching themes, from the most restrictive to the loose and nominal. The Wintertime Paradox stands out because not only is there a general theme – Christmas, that well-worn favourite – but all the stories are by a single author. Unless I've missed something along the way, I think this is the first time Doctor Who have done such a thing, although Jenny Colgan received a collected set of her stories and novellas around the same time.

Dave Rudden brings a new and interesting style to Doctor Who, presenting stories which cover various genres and subjects but still recognisably of one voice. His stories are easy to read and often very funny, but pack a punch as well. This isn't a feel-good book, in spite of the Christmassy theme; Rudden clearly gets that Christmas cheer works best alongside the bittersweet and spooky parts of that time of year. What's exciting as a Wilderness Era fan is the secondary theme that runs through much of the collection: the paradox of the title.

Rudden clearly got caught up in Doctor Who in the same period I did, and is one of the few writers to call back to the Eighth Doctor Adventures era of BBC Books that was one of the main ranges of Doctor Who between 1997 and 2005. Unlike the 90s New Adventures by Virgin, the EDAs haven't had much influence on contemporary Who, excepting the pretty major impact of a devastating Time War that saw the Doctor destroy Gallifrey to protect the universe at large. I much prefer the attitude that the War in Heaven seen in the EDAs and the Last Great Time War that preceded the modern series were different iterations of the same catastrophic event.

Rudden runs with this, presenting a post-War universe that is still reeling from the many interventions and revisions perpetrated by the Doctor and other belligerents in the War. As such, this is the first time in decades that official Doctor Who has called back to the War in Heaven, and specifically to Faction Paradox, the renegade cultists who were so important to the EDAs but seemingly didn't survive beyond that era (excepting fascinating work by Obverse Books). For most of the collection there are little hints and cameos by two surviving Faction agents, disconnected from their history during the Doctor's latest destruction/removal of Gallifrey, and they don't actually get a story to themselves until the twelfth story, “The Paradox Moon,” where they finally come face-to-face with the Thirteenth Doctor.

However, the Faction's influence is felt throughout the collection. They work in the shadows, as it should be. The gorgeous “Visiting Hours” focuses on Rory coming to see River at the Stormcage prison, bringing with him a plated-up Christmas dinner. It's absolutely lovely and tugs at the heartstrings even as a chaotic prison-break featuring powerful alien criminals goes on around them. And of course the Faction are there in the postscript – River is the most obvious target for them ever, both in herself and as a route to the Doctor.

Many of the stories work by sketching in the ongoing events around, under and behind the stories we're familiar with. “Father of the Daleks” proposes the odd but somehow entirely believable revelation that the Doctor meets with Davros every Christmas for a neutral parlay, as they both try to convince the other to see things from their point-of-view. It hammers home just how frighteningly similar the two ancient characters are, and works as a bridge to “The Magician's Apprentice” (as well as giving us an Eleven/Davros story, a pairing that works remarkably well). “A Day to Yourselves” is just brilliant, seeing the Ninth Doctor, just before the events of “Rose,” continually intervening in major galactic events only to find one of his later selves has got their first. It's a funny but affecting story of the Doctor working to heal themself by involving themself in their own past when they were most vulnerable.

Other stories don't feature the Doctor at all but focus on supporting characters. “A Perfect Christmas” is an adventure for the Paternoster Gang, but one that ties into the machinations of the Papal Mainframe seen in “The Time of the Doctor,” itself a deeply Paradoxical organisation. “For the Girl Who Has Everything” is a spot-on stoory for Osgood, leading up to her involvement in The Day of the Doctor but also managing to provide a well-reasoned follow-up to “The Sontaran Stratagem.” “Missing Habitas Frond” is an adventure for Missy, who is clearly just a joy to write for every author who gets to play with her.

While it's heavily focused on the BBC Wales series, classic era Doctors do get involved. “A Girl Called Doubt” features the Fifth Doctor, but mostly focuses on the experiences of one soldier in the Cyber Wars, and has a gut-punch reveal. “We Will Feed You to the Trees” is as effective a Seventh Doctor story as I've read in a while, seeing him not pulling the strings like a master schemer but heading somewhere to investigate a mystery and not stopping until he's left things better than he found them. It features a fascinating central sci-fi concept too, the sort of thing Doctor Who doesn't do enough of these days.

“Christmas With the Plasmavores” barely features the Doctor, instead being a standalone horror story that presents a clever new take on the monstrous race from “Smith and Jones.” “He's Behind You” and “Inflicting Christmas” are solid adventures for Ten and Rose, and Twelve and Bill respectively, but don't sing like the others in the collection. Even so, they're well-written, entertaining adventures, better than an awful lot of what gets published in the range lately.

Suitably paradoxically, the collection advertises itself as containing twelve stories, but the reprint version actually includes thirteen. “Canaries,” a previously released e-story that ties into the now defunct Time Lord Victorious event (remember when that seemed to be a big deal?) Primarily, though, it's a further exploration of the Faction's involvement in the Doctor's life and the endless array of discontinuities that have built up through constant time travel. It works far better here than as part of the TLV crossover, and, rather appropriately, isn't exactly the same version that was previously released. Stories, like time, can be rewritten, over and over again...