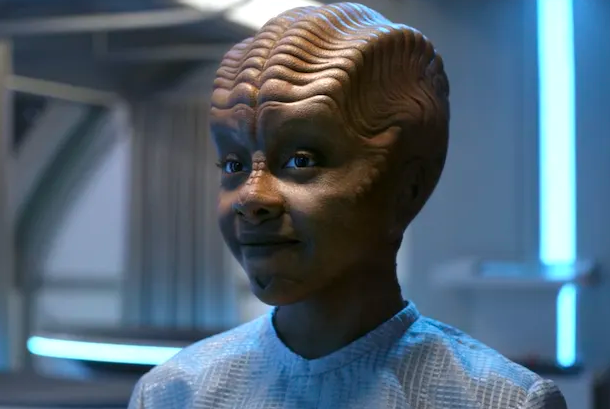 The Orville: New Horizons continues to deliver relevant surprising and important stories in its revitalised third season. The five episodes released so far have, on the whole, been excellent. After the powerful season opener, “Electric Sheep,” “Shadow Realms” built on the Krill-Union storyline while delivering an effective sci-fi horror story. Episode four, “Gently Falling Rain,” was a thriller with spectacular visuals, strong action and some genuinely touching moments. Further developing the Krill storyline, it commented on political popularism, while briefly taking a swipe at the abortion debate and religious extremism on the whole. Only the third episode, the throwaway “Mortality Paradox,” failed to really make an impact; obvious filler that isn't really about anything.

With episode five, though, the series reaches its zenith with the controversial and beautiful “A tale of Two Topas.” Once again, the series delves into the long-running storyline concerning the Moclans, their contentious culture, and their strained relationship with the rest of the Union. This kicked off right back at the very beginning of the programme, in episode 1.3, “About a Girl,” which introduced the truth of the Moclan civilisation: that although they are seemingly a world entirely of gay men, who can and do reproduce with each other, hatching baby boys, females of their species do exist. When Lt. Cmdr Bortus (Peter Macon) and his civilian husband Klyden (Chad L. Coleman) have a baby girl, the two men fall out over the decision to have her surgically altered into a boy, the standard Moclan practice.

That episode didn't quite come off, in spite of its lofty ambitions, in part because it tried to address too many issues at once. Nonetheless, it was impactful, and the consequences for Moclan culture continued in the later episode, “Sanctuary” (2.12), further exposing the existence of Moclan women. Bortus and Klyden's relationship also suffered, coming to a head in 2.2, “Primal Urges,” while Moclan culture's misogyny was further explored in 2.7, “Deflectors,” where Lt. Keyali entered a forbidden relationship with a Moclan man. These episodes managed better than “About a Girl” by focusing their stories on particular elements of the Moclan debate, hitting home harder as a result.

The Orville has continued to improve as it has developed and moved further from its comedy roots, and “A Tale of Two Topas” is once again an affecting, meaningful sci-fi story told straight. In the few years since “About a Girl,” Topa has grown into an adolescent (alien races always being a handy way to move quickly past the infant stage on TV). Now played by fifteen-year-old Imani Pullum, Topa is old enough to have decided that he wants to join the Union fleet and has begun shadowing Commander Kelly Grayson (Adrienne Palicki) as part of his preparation. The boy remains completely unaware that he was surgically altered as a child, or that he was born physically female, but still feels that there's something wrong with him.

Pullum, a very new actor, is excellent in her scenes as Topa. The young Moclan is very clearly depressed, something that comes through more in his demeanour than his words or actions. There's a visible weight on his shoulders; it's a remarkably strong and subtle performance. Palicki, who doesn't always have a great deal to challenge her on the show, is also very good as Grayson. We see, during Topa's shadowing, how much of her day-to-day work involves trying to keep the crew, made up from multiple different species, rubbing along together. There's a rare outright comedy scene early on where Grayson has to confront an alien crewman who refuses to wear clothes on the first day of the month, according to his religion's dictates. It's silly, but sets the theme of the episode of cultural clashes. Unlike with the naked crewman, who is persuaded to compromise by wearing pants, there is no easy resolution to the Moclan situation. (Although it would have been even simpler to give him the first day of the month off so he could be naked as he liked in his quarters, but I digress.)

Grayson is torn between her moral need to tell Topa the truth and save him misery, and her responsibility as first officer to maintain the peace and honour the decision that was made on Moclus. It's well played by Palicki, who hold her own as one of the focal actors of the episode.

Topa's depression worsens, in spite of Kelly's mentoring, and he begins to ask Isaac – the recently suicidal android – what it's like to be dead. For a horrifying moment I feared that the season opener was going to be followed up by another, irreversible suicide, but that, while sadly all too believable, would have been devastating. With this added pressure, Grayson helps Topa discover the truth, with the help of another, unknown party who provides access to protected files. What follows is the inevitable, but cathartic, confrontation between Topa, and, well, everyone in her life, all of whom kept the truth from her. She is most furious at her fathers, but also feels deeply betrayed by Grayson. Topa declares that she wishes to be female, her true self, and by this time Grayson, and soon others, have begun referring to her with she/her pronouns, the switch happening almost without notice, it seems so natural.

Bortus and Klyden's relationship is brutally wounded by this turn of events. Bortus had long been the one who championed Topa's right to live as she was born, but agreed to abide by the Moclan government's decision. The wedge this drove between the husbands seems to have just about healed by this point, but is reopened violently. Bortus is revealed as the one who supplied Topa with the password needed to access the files, while Klyden is as resolutely anti-female as he ever was. There's an additional level to Klyden's hatred of women, which has been tolerated as a cultural difference for too long: as was revealed back in “About a Girl,” he too was born female, and was altered. Only Klyden now reveals he wishes he had never known about his “defect,” and that he is merely trying to spare Topa the same pain.

While this paints Klyden in a more sympathetic light, there is never any chance he is going to be portrayed as right here. Bortus is torn up by the situation, breaking down in tears in a truly heartbreaking moment when he opens up to Kelly about it. Macon, who so often has to play the Moclan officer as stoic and resolute, is absolutely incredible in this scene. From here there is some debate among the command crew over what to do with Topa, who wishes to undergo gender reassignment surgery to undo the change that was made to her without ther consent. This only requires the permission of one parent, and Bortus consents, but Captain Mercer (Seth MacFarlane) is worried about the reaction from the Moclans. Predictably, the Union Council refuses to allow the procedure, fearing that the Moclans will pull out of the Union when their help is needed against the twin threats of the Kaylon and the Krill.

The episode could have ended like this, with the decision of those in power overruling that of the person who is suffering, as is so often the case in real life. However, the crew find a loophole that allows the operation to be completed without implicating the Union. Really, though, I doubt the Moclans would have ever gone through with their threat to secede from the Union: like Klyden, while their beliefs are strong, they are full of sound and fury but ultimately weak.

After her operation (far, far simpler and quicker than in reality, but then, isn't that what we hope for such things?), Topa once again has a body that aligns with her identity. Aided by only subtle changes in make-up, Pullum once again impresses by making this version of Topa clearly female where appeared male before. Again, the subtlety of her performance is astounding. While it's a happy ending, there's still a sting, as Klyden, appallingly, disowns his daughter, saying he wishes she'd never been born, abandoning her and Bortus. Again, all too believable.

The genius of the Moclan storyline has always been how closely it reflects debates in real life, but then puts them into sharp focus by inverting them. While on 21st century Earth, people in same-sex relationships still face discrimination, either illegally or enshrined in their country's law, the Moclans are all homosexual men, save for a few who are treated as pariahs. Topa pleas not just for gender reassignment surgery, but what is really a “de-transitioning.” This could have gone badly wrong had the episode not been written and performed as well as it was, ending up backing the common, but entirely false, claim that many transgender people regret their surgery. Instead, it's presented in the same way as the Moclans' sexuality: how dare you be straight! How dare you be cisgender!

The only element that aligns directly to real life is the Moclans' misogyny, which is all too common, and indeed a fundamental part of some cultures' ruling regimes. In “About a Girl” this veered close to xenophobia and racism, but here it's handled with more care. Still, it's hard not to agree with Mercer when he asks “How long do we put up with this?” Some cultural views are so aborrent to outsiders that it seems there can be no compromise. However, by refusing to engage with each other, there can be no learning. Still, it remains an element with a strong parallel in the 21st century.

A risky episode then, but one that comes off with great success, thanks to the skilled writing and direction of MacFarlane, and the performances of Palicki, Macon, Coleman and, above all, Pullum.

Email ThisBlogThis!Share to TwitterShare to FacebookShare to Pinterest
Labels: LGBT, reviews, The Orville