It's been a crushingly sad week for generations of viewers of film and television, as two of our most beloved actors have gone. 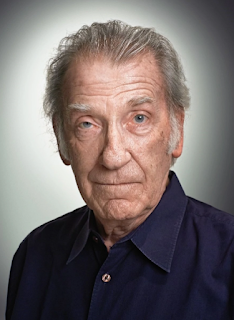 died on the 24th of July, five days shy of his 81st birthday. One of my very favourite actors, possessed of one of the most distinctive and classy voices in the business, Warner was one of the most identifiable and prolific actors of the late twentieth century.

Sci-fi and fantasy fans will recognise him most. Iconic roles in The Omen (where he famously lost his head), 1984's A Christmas Carol (as Bob Cratchit), Tron, The Man with Two Brains, Time Bandits and The League of Gentlemen's Apocalypse. He appeared in Star Trek three times: rather wasted as disgraced diplomat St. John Talbot in Star Trek V, before he was brought back as the noble Klingon chancellor Gorkon for its sequel. He then starred as the sadistic Gul Madred in an electrifying two-hander performance opposite Patrick Stewart in “Chain of Command,” a two-part story for The Next Generation.

He was disproportionately cast in villainous roles, ironically considering that no one seems to have a bad word to say against him. He was none other than Jack the Ripper in Time After Time (in spite of the obvious fact that he would have made an excellent H.G. Wells), and had memorable appearances in horror films from The Company of Wolves, In the Mouth of Madness and the lead villain in Waxwork.

Warner was never shy of taking on voice work that other actors would consider beneath them. He was an everpresent voice of my childhood, lending his ever-so-English voice to villains in Batman: The Animated Series (as Ra's al Ghul), Mighty Max (as Talon), Men in Black: The Series (as the evil Agent Alpha) andd Freakazoid! (as the Lobe). He was a recurring voice in the 90s Spider-Man, Gargoyles (with many Trek alumni) animated series and even voiced a magical tree spirit in Jim Henson's Dinosaurs.

His best vocal work, though, was with Big Finish, for whom he played many, many roles, from Mycroft Holmes to Isaac Newton to the Doctor himself, portraying alternative Third Doctor in the Doctor Who Unbound series. One of my favourite portrayals of the Doctor, he was so popular he got a sequel and eventually was brought back to star opposite Lisa Bowerman in the latest Bernice Summerfield series, with the two of them, I was surprised and delighted to just learn, becoming an item. Warner didn't appear onscreen in Doctor Who until 2013's “Cold War” as a Soviet scientist opposite Matt Smith, but he has already recorded BF's 60th anniversary release with Christopher Eccleston, who has professed himself a huge admirer of Warner's. I hope this is one last turn as the Unbound Doctor. He was even Merlin in a wonderful BBC radio series, playing him pretty much exactly as he played the Doctor – and, well, you know they're one and the same.

There are still plenty of his appearances I have yet to see, such as Van Helsing on Penny Dreadful to the Monster in 1984's Frankenstein TV movie. Sadly, I never got to see him in any of his many stage performances, for he was also one of the classic Shakespearean actors. I never met him, but I am fortunate to be only a couple of steps away from him: my mother knew him a little, back in the day, describing him as a very nice, very shy man. A great loss. 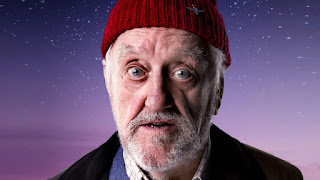 died this week at the remarkable age of 93. An even more recognisable face than Warner's and television's most comforting presence, Cribbins was acting, singing and performing for eighty years. Bringing himself out of a background of considerable poverty, he went on to become one of the most beloved actors for generation after generation of children, a love that never left anyone as they sadly had to grow up.

He'll always be best known as the voice of The Wombles and the greatest, most prolific reader Jackanory ever had, but he was a face in so many more screen roles. The Railway Children, multiple Carry Ons, a bit of Corry and as the fake hotel inspector in one of the very best episodes of Fawlty Towers, all these showed a great and versatile acting talent.

Of course, he was also a familiar face for Doctor Who fans, appearing as two entirely separate companions. Firstly, as policeman Tom Campbell with Peter Cushing in Daleks: Invasion Earth 2150 AD on the big screen, and almost four decades later as Donna's grandad Wilfred Mott opposite David Tennant on the TV. Like Warner, he was working till the end, and will appear opposite Tennant and Catherine Tate again in the BBC's 60th anniversary special (how wonderful both actors got to appear specials for the anniversary, and how sad that they won't get to experience them).

Still, my most beloved bit of Bernard is his two hit singles, “Hole in the Ground” and the truly spectacular “Right Said Fred.” For these alone he shall never be forgotten.