This review contains spoilers for Love and Thunder and just a brief one, in passing, for Ms. Marvel. On a related note, I swear I'll get those reviews of Shang-Chi and Black Widow up before they're two years out-of-date. 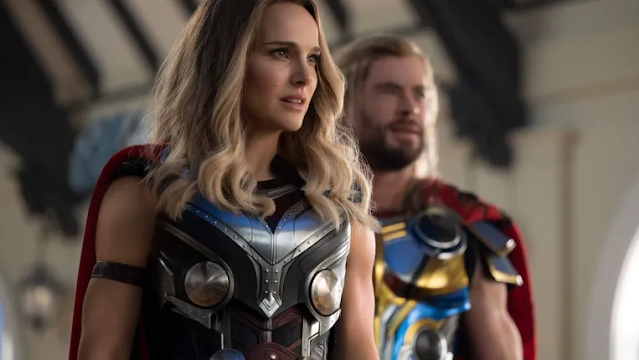 It's bad enough living in a world where people insist on worshipping gods who clearly either don't exist, or remain so silent they may as well not. How much worse, though, to live in a world where the gods inarguably, evidently, empirically do exist, but refuse to help their followers or act for good in the universe?

The Marvel universe has been chock-full of gods and demons since it began, but until now the MCU has been fairly reluctant to engage with this. The Asgardians and Jotun (or the Aesir and Jotnar if we're being mythologically correct about it) were originally presented more as extremely aliens who presented themselves as gods. In Phase Three, the existence of magic was confirmed and demons such as Dormammu were presented. The Celestials, while spectacularly powerful, were presented in Phases Three and Four as enormously advanced, god-like aliens, but still not gods as such. Now, though, Love and Thunder shows us that gods do exist in the MCU, and the Asgardians are only the least of them.

Love and Thunder adapts elements of more recent Marvel comics. Gorr the God Butcher appeared first appeared in 2013, and Jane Foster, while being a part of Thor's story since his first comics appearance back in 1962, became the Mighty Thor the in 2014. While the film adapts the main elements of these stories, it also skips some pretty fundamental parts of them. Still, what it does include is written and performed beautifully, and above all, very entertainingly.

Firstly, looking at Gorr, we have the one of the better MCU villains in this phase. While he can't stand up to Wenwu as an intimidating and sympathetic antagonist, Gorr works as a solid villain whose motivation is entirely understandable. Indeed, I couldn't help but root for him at certain points, since his anger at the gods is entirely justified. It is not, of course, fair to blame Thor for the actions of other gods, as the Thunder God has clearly done his duty and helped mortals in need, but as for the rest of them? Christian Bale puts in a brilliant performance as Gorr: camp, histrionic, unsettling and sympathetic. Once he starts threatening children, he loses a lot of the goodwill, but even this is a twisted response to the loss of his own daughter. A distinct visual style for Gorr helps as well, making him a memorable villain.

Then we have Jane. Natalie Portman receives a lot of criticism for her acting, but I feel she's one of those actors who you can tell whether they're inspired by the part or not. When she has something substantial to work with, she's amazing. As a stunningly beautiful ground-breaking astrophysicist, Jane should be an irresistible character, but in Thor she lacked substance, and in The Dark World she was reduced to a plot device. It's unsurprising that Portman didn't want to come back for Ragnarok, nor that the filmmakers chose to press on without her. Finally, though, she gets some solid material, as Jane not only gets to be a superhero, but also faces terminal cancer, giving Portman something to bite into.

Nonetheless, she still doesn't get to carry as much of the film as she could, and arguably should. In The Mighty Thor comics from 2014-on, Jane replaced the original Thor, who had lost his way and was no longer worthy to carry Mjolnir. While there's an element of that here – Jane being worthy to not only carry the hammer, but to bring its pieces back together – having her there as simply Thor #2 misses the point of this storyline. There was an opportunity to have Thor dealing with a serious crisis of identity and purpose here while Jane took over as the hero for the story, and this was unfortunately missed.

Hemsworth himself is as good as ever as Thor #1, having perfected his mix of godly nobility, aristocratic arrogance, and good-natured himbo confidence in Ragnarok and carried it over. He and Taika Waititi are a perfect match, both as star and writer-director, and as hero and sidekick (Waititi appearing, of course, as rockman Korg, in spite of being superheroesque in his real-life looks). Tessa Thompson remains perfect as Valkyrie, King of New Asgard, who looks as amazing in a hoodie as in a suit as in full battle regalia, gets all the funniest lines and dominates fight scenes even in the hulking presence of Hemsworth. Valkyrie also finally gets to be openly bi in the film, which, although not nearly as gay as Waititi made it out to be in interviews, is still gratifyingly and unashamedly queer in parts. (Korg, like The Orville's Bortus, coming from a race of men who reproduce together.)

For sheer entertainment value, Russell Crowe playing Zeus as a lecherous, spoilt, vain middle-aged idiot is hard to beat, although it is fair to say that the joke wore thin after a while. Apparently, he was originally hired to play Satan – production art exists of his devil look – which would have been brilliant but a hard one to get past Disney, even these days. I love the running joke of the Asgardian historical plays, especially now with Melissa McCarthy as Hela, although it's a shame this probably prohibits Sam Neill from having a proper role in the MCU. All this is good fun, and that's the joy of this film: it's unabashedly entertaining throughout.

There are fragments of an earlier treatment in the finished product. It's pretty clear that the original idea was an “Asgardians of the Galaxy” approach, a team-up film between Thor and Quill's crew, but it's equally as clear that Waititi didn't want to go in this direction, so the Guardians are written out very early on. Bizarrely, the trailers chose to focus on them rather than, say, the God Butcher or Jane as Thor, presenting a very different film to the one we actually got. Equally, the serious elements of the script, including the brutal attack on New Asgard, Jane's devastating illness and Gorr's loss that leads him on his vengeful path are all somewhat overshadowed by the frivolity of the film. As enjoyable as it is, the tone of the film is all over the place.

Overall, though, it works, simply because it's so enjoyable. It's hard not to enjoy a film that combines such spectacular superheroics with genuinely bizarre and creepy visuals, cheeky flashes of Hemsworth nudity and an incredibly sexy trio of heroes in armour, punch-the-air victory moments with an adorable sideplot dealing with the Asgardian kids' learning to be brave from Thor before storming the villain in the climax. The very last few scenes work where so many similar such stories don't. I couldn't help but think about the sudden heel-turn by the villain in Ms. Marvel, which came out of nowhere with so little work behind it, and Gorr's heartfelt and desperate change of motive at the last, which felt hard-earned and entirely in character. Brining Eternity – the single most powerful being seen in the MCU so far and arguing for the top spot in the comics – raises serious questions for the MCU as the whole (why did no one try this before?) but works perfectly in the context of the film. It even allows the gods, who are really only a tier above the superheroes, to have their own god, and one that actually comes good on its promises.

The fights, the effects, the jokes and the screaming goats all serve to hide a story that threatens to be about a lot of things: self-identity, worthiness, faith, but finally turns out to be about family. This is ultimately what the characters are fighting for, in their own ways. It's perfectly appropriate that Thor ends up with a new family at last, to help with the loss of his own, and perfect that his own daughter plays the role of the young girl Love (with his sons cameoing as younger Thors to boot). Each of Thor's films have left him in a different place to where he began, and this is, along with the sheer fun of it, is the best argument to keep making them.

Plus, those two mid-and-post-credits scenes are perfect.